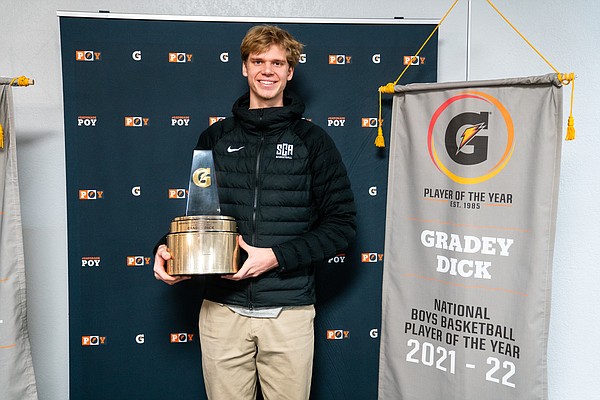 Formed in 1898, WME dubs itself the longest running talent agency in the United States and lists iconic acts like Charlie Chaplin, Elvis Presley and Marilyn Monroe as past clients. The announcement revealed that WME will represent the five-star KU signee in “all of his off-court marketing NIL endeavors in-cluding brand partnerships, digital content development and more.”

In a video announcing his signing, Dick noted that that one of the big reasons he signed with WME was the company’s will-ingness to let him direct where his NIL opportunities go. He lists early childhood education and cancer research as two ar-eas that are most important to him and said he wants to “con-nect with some of the biggest and brightest companies and brands out there.”

He also hopes to use his platform and future NIL deals to give back to his hometown of Wichita, where he starred at both Wichita Collegiate and Sunrise Christian Academy before signing with KU.

One of four freshmen already signed in KU’s incoming recruit-ing class, Dick and his teammates are expected to report to campus for the start of summer workouts in early June.

Dick becomes the first Kansas basketball player to secure NIL representation before arriving at KU. As a McDonald's All-American, the 2022 National Gatorade Player of the Year and a well-known prospect, his personal brand, combined with what a program like Kansas can offer in terms of exposure and opportunity, figures to open a wide range of NIL possibilities for the 6-foot-7 wing, who already is projected by ESPN.com as a first-round pick in the 2023 NBA draft.

How does it work with the deal KU has with the other company for representing athletes in general?

Calling on that tomorrow. Definitely interested. Hoping to have much more on this for Saturday's paper.