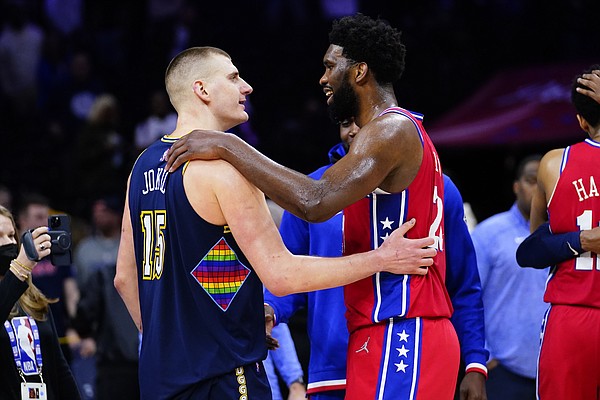 The most valuable player discussion has once again become a hot topic with Kansas basketball fans, a little more than a month after debating which Jayhawk should’ve won the NCAA Tournament MOP honors during this year’s run to the national title.

This time, however, it’s at the NBA level, where reports have indicated that former Jayhawk Joel Embiid is headed toward finishing as the league’s runner-up to Denver big man Nikola Jokic in the MVP voting for a second consecutive season.

Embiid was spectacular this season. There’s no arguing that.

In addition to playing a career-high 68 games during the regular season — no small feat given his injury history — the 7-foot center from Cameroon led the league in scoring at 30.6 points per game and ranked third in rebounds per game at 11.7.

Jokic, meanwhile, finished sixth in scoring (27.1 ppg) and led the league with 13.8 rebounds per game.

Those numbers are close enough to be a toss-up. So, too, are many of the others. From 3-point makes (97-93 in favor of Jokic) to free throw percentage (Embiid took that one 81.4% to 81.0%) and more, the stats recorded by the two superstars were equally as impressive all season.

Here’s the thing, though. Jokic, who led the Nuggets to the No. 6 seed in the west while playing most of the season without starters and borderline stars Jamal Murray and Michael Porter Jr., did something that no player in NBA history had ever done by eclipsing 2,000 points, 1,000 rebounds and 500 assists in a single season.

No player. Ever. Not Jordan. Not LeBron. Not Wilt. Not Kareem. No one. You can’t just throw that away. It’s even more meaningful in this context when you look at both basic and advanced statistics for the 2021-22 season.

Of the 20 other advanced+ and miscellaneous statistics used by @statmuse to breakdown to the MVP race (which included Milwaukee’s Giannis Antetokounmpo), Jokic was the leader in 15 of them.

Add to that the fact that the 7-foot Serbian’s 32.85 Player Efficiency Rating was the highest mark in NBA history, and it’s really a pretty open and shut case when you talk about the overall picture of the race.

It’s awesome that KU fans have almost universally thrown their support behind Embiid. And while not surprising, given how much pride he brings to the program for dominating the way he has on the biggest stage in basketball, it is pretty impressive that KU fans still feel so strongly about him given the fact that he was in Lawrence for just one season and did not play in a single NCAA Tournament game with the Jayhawks.

Again, no surprise, but still cool to see and merely the latest indicator of just how passionate Kansas fans about their Jayhawks.

The biggest thing the Embiid supporters have working in their favor in the argument is the fact that Philadelphia won more games than Denver (51-48) during the regular season and that the Sixers are still playing in the playoffs.

After knocking off Toronto in six games in Round 1, Phily and Miami are tied at 2 games apiece in the second round entering Tuesday night’s pivotal Game 5. The Nuggest, meanwhile, were outsted by third-seeded Golden State in five games in Round 1.

This isn’t a postseason award, though. The NBA’s MVP honor is handed out to the regular season MVP, so who goes deeper in the playoffs does not and should not play a role in the decision.

They could (but won’t and shouldn’t) elect to change the format and turn the NBA’s annual MVP award into a full-season award. But doing that would totally negate what players do during the 82-game regular season and basically would make the whole thing come down to the best player on the team that wins it all receiving the award.

Sound familiar? It should. That’s how KU senior Ochai Agbaji won the MOP honor at the Final Four in New Orleans, even though strong cases could be made that both David McCormack and Remy Martin — if not Jalen Wilson, too — actually delivered better numbers during the Jayhawks’ NCAA Tournament run.

These things are never going to be easy or clean. There are always going to be debates, snubs and frustrations. There’s nothing wrong with that and, in some ways, it even adds to the fun.

Embiid will win one someday. Jokic is a worthy MVP today. And people on both sides of the coin can debate their stance until their heart’s content.

Nothing wrong with that.

The complete stats breakdown of the MVP race pic.twitter.com/P2G0fxDfAZ 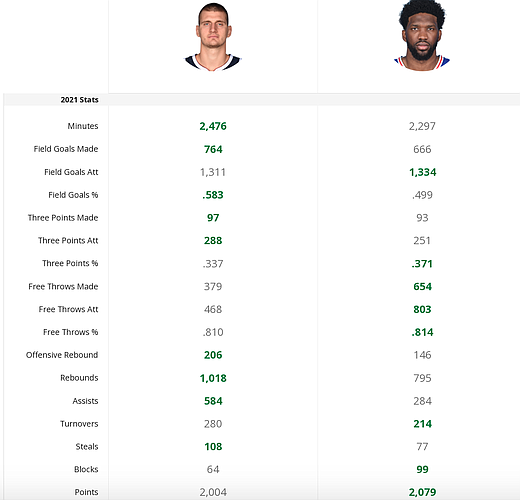 A side-by-side statistical comparison of 2021-22 NBA MVP candidates Nikola Jokic and Joel Embiid put together by fantasypros.com. by Matt Tait

I don't usually watch the NBA a bunch, but this year I watched quite a bit after college ball and I have to say that Jokic's game is impressive. The guy is basically a 6' 11' point guard.

Unfortunately, Joel Embiid and the rest of the 76'ers were a no show in the important game five against Miami. I too do not watch many NBA games these days – much prefer college basketball. However, I watch the 76'ers now and then because of Embiid - arguably the best talent to come through Allen Fieldhouse since Danny Manning & Paul Pierce (the Lakers and 76'ers were the teams I followed growing up). Mr. Embiid did not look very engaged during the 35-point blowout and Mr. Charles Barkley suggested he needed a wakeup call at halftime, which apparently did not happen.

According to the article, Joel actually asked to be red shirted at Kansas in his one and only season!

The article also discusses the terrible tragedy, when Joel's younger brother was killed in Cameroon in a horrible accident.

In my opinion, Joel should have been MVP this season, he carried the 76'ers without Ben Simmons.

The three finalists Jokic, Joel, and Giannis were all deserving of the award.

I would cut Embiid some slack Andy, as he did just suffer a "right orbital fracture and mild concussion", in their Game 6 victory over the Raptors, along with dealing with a right thumb sprain, which certainly could explain why he "did not look very engaged" as he wears a protective mask. Hopefully he'll find his energy/mojo and lead the 76ers to victory, as they certainly depend on him to be dominant otherwise they have no shot.

I'm still mostly just happy that after all the early injuries, during and after his year in college, he actually got healthy and has had the chance to shine. He was the most engaging talent in a single year that I remember watching at KU - you could actually see him get better not just game to game, but half to half.