Self: 'Major minutes' for Remy Martin at Big 12 tourney would be nice, but only if he's worthy 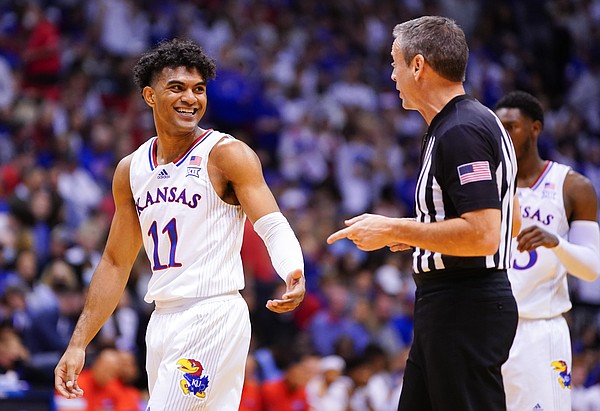 Kansas guard Remy Martin (11) smiles as he chats with an official during the first half on Saturday, Dec. 11, 2021, at Allen Fieldhouse. by Nick Krug

Kansas City, Mo. — With seven other potential foes demanding his attention and the goal of fine-tuning things for the NCAA Tournament still at the top of his to-do list, Kansas basketball coach Bill Self admitted something about senior guard Remy Martin on Wednesday at T-Mobile Center.

“I’ll be honest,” Self said during his meeting with the media following a 40-minute practice on the T-Mobile Center floor Wednesday afternoon. “In a perfect world, it would be nice to give him some major minutes, but we’re also trying to win the game. So, I hope they both can co-exist.”

Back from a prolonged absence brought about by the bone bruise in his right knee that forced him to miss several games, Martin has been available for the past couple of weeks.

And while he has played in all four games since his return, Martin has logged just 32 total minutes in those games as Kansas has elected to ease him back into the mix in order to keep him healthy and shake off as much of the rust as possible.

Self said Wednesday that he thought Martin’s health was “pretty good.”

“I think he’s gotten past worrying about cutting sharp and playing on it full-speed,” Self said.

The veteran Kansas coach, who noted on Tuesday that he thought Martin still “could be a big factor” for Kansas this postseason, also noted that he had been encouraged by what he had seen from Martin during the past couple of days.

“I do think he’s shown flashes of being his old self,” Self said Wednesday. “But, you know, he was out for quite a bit of time. I don’t know that, up until the last couple days, he actually looked like old Remy. If he plays like old Remy, then he’ll get his minutes. But I’m not going to put him out there if he’s not able to perform in a way that gives us the best chance to win.”

Asked if the biggest issue with Martin’s fit on the court was more about chemistry with his Kansas teammates or moving past the injury, Self said he thought it was a case “just getting back in the flow in general.”

While recent outings have made a big-minutes type of role for Martin seem less likely, Self said he could see the former Arizona State standout filling a key role in certain situations.

“Especially with different teams and lineups and those sorts of things,” Self said. “I think Remy could certainly play a huge role down the stretch.”

Top-seeded Kansas (25-6) will open Big 12 tournament play at 2 p.m. Thursday against No. 9 seed West Virginia at 2 p.m. inside T-Mobile Center. The game will be shown on ESPN2.

Whether it is Martin or Coleman-Lands, the Jayhawks will need a “M Newman like” performance out of someone in order to make a run into the Final Four. Some player needs to step up - from outside the starting five.

I went back and looked at box scores for that 2017-2018 and Newman definitely started every game in the NCAA and Big 12 tourney. I didn't look into games before that. But I would guess he was a started midway through that season. Your point remains though, someone needs to breakthrough in March.

He won't be worthy.

He needs to show consistency on the defensive end of the floor. We all know guard play is crucial come March and if he keeps allowing opposing guards to get to the rim/lane so easily, he won't see the floor a lot. Pretty simple to me. We know what he is capable of offensively, it's about getting stops in March.

and it still comes down to matchups/ game situations

Why can't everyone move on from Remy. It is clear he is not a good fit for this team. The reasoning is irrelevant.

I mean, he's still part of the team. Can't really move on from him until the offseason or unless Self moves on from him. And Self doesn't appear ready to completely move on, and maybe he should. I'm not the coach, but it's clear Self isn't sure what to do with him.

I didn't get to watch to see how he moved around out there, but considering the lopsidedness of the game, his underwhelming numbers and the fact that he didn't play "major minutes" I would assume that Self was not impressed.

Remy obviously hasn’t contributed the way that many hoped, but maybe his biggest contribution was the peer teaching to get Yesufu to the place where he can provide 17 minutes. Joe was really struggling, mentally as much as anything, we’ll into the season. I was really afraid that it was going to become a doesn’t fit scenario where he moves on after a year. Fortunately, Remy isn’t lacking in confidence and stayed on Joe when he wasn’t playing. Sometimes, even Coach can’t change 4 or more years of bad habits in less than 1.

Harris is a decent player but because Self has him as his favorite limited time for the others. Playing two point guards at the same time isn't working and Wilson, Braun and Agbaji needs to be playing. It appears to me that there isn't much difference who plays the point.

Dajuan is one of the best pg’s in the league. 4th in assists, but about half as many TOs as the 3 in front of him. About 50% more assists per TO which is a reliability that Coach Self loves, and every other coach would as well. Dajuan is still growing in confidence as a scorer, but that isn’t particularly important when he’s distributing to the weapons we have around him. He only needs to shoot enough to keep the D honest.

Nationally, Dajuan is only 85th for A/G, but top 10 A/T. Pretty decent indeed.