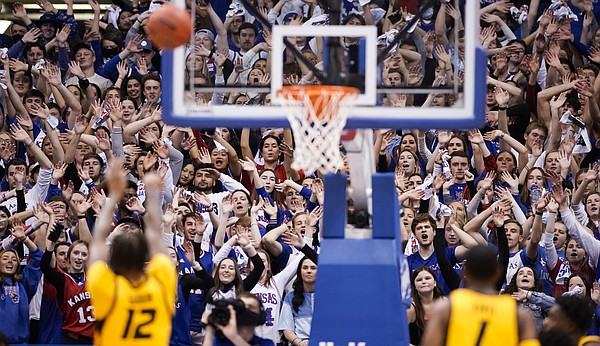 The Kansas student section looks to disrupt a Missouri free-throw during the second half on Saturday, Dec. 11, 2021, at Allen Fieldhouse. by Nick Krug

But there’s more at stake for Kansas basketball fans who don’t comply with the mask mandate than just disappointing Girod.

According to a page on the official Kansas Athetics web site titled “Mask Mandate – Implications for Allen Fieldhouse,” there is a strict set of rules and consequences for wearing and not wearing masks at upcoming KU basketball games. Those fans who violate those rules could be removed from the venue.

The page notes that “if fans do not comply with the mandate, additional measures will have to be taken, (including) closing concessions and decreasing fan attendance at men’s basketball games.”

But the Q&A section spells out in much greater detail everything that will go into the mask requirement and KU’s policing of it, starting with Tuesday’s 7 p.m. game against Iowa State.

The most noteworthy part of that section is what KU calls a “Three strike policy,” which carries a maximum penalty of fan removal from Allen Fieldhouse.

Under the section explaining Strike 3, the site notes that “these employees are trained in the art of ‘ejection.’”

“If fans do not comply with this mandate, they will be removed from Allen Fieldhouse,” the site reads.

As has been the case throughout the pandemic — be it when Allen Fieldhouse had a mask recommendation or a mask requirement — KU notes that fans must be wearing a mask at all times except while actively eating or drinking.

The word “actively” is written in all caps for emphasis, and the rule references that if too many fans “try to pretend they are actively eating or drinking” that could lead to the closure of concessions stands at future games.

“There are a number of arenas around the country that have closed concessions at basketball games for this exact reason,” the site notes.

When asked about Girod’s message last week, Kansas basketball coach Bill Self said the mandate was not a threat but rather reflected the reality of the current landscape, with the omicron variant pushing the latest COVID surge.

Self said last Friday that he would coach in a mask if those were the rules, and he did exactly that during KU’s loss at Texas Tech over the weekend.

“It is important to remember the reason behind this mask mandate,” the site reads. “KU and Allen Fieldhouse are looking to play an important role in protecting the community by doing our part to slow the spread of the highly contagious COVID-19 variant. If our fans comply, as we expect them all to, our hope is to significantly slow the spread of this virus.”

For his part, Self made a plea for fan cooperation by reminding them of what they could be missing out on if people do not comply.

“If you like attending KU basketball games, which 16,000 do every single time we play, then you’re going to have to mask up and respect that,” Self said. “And if we respect it and handle it right, hopefully in the very near future that will be given back to us (and) we don’t have to do that (anymore).”

The KU men are scheduled to play back-to-back home games this week against Iowa State on Tuesday and West Virginia on Saturday. They’ll play two more home games at the end of January — Jan. 24 vs. Texas Tech and Jan. 29 vs. Kentucky.

The KU women’s team is on the road for its next two games but still has two home games scheduled this month — Jan. 16 vs. Baylor and Jan. 22 vs. Texas Tech.

Just wear a paper bag on your head. Not only will it please Girod, but it would reflect collective disappointment in our team's ability and effort in defending the perimeter and paint.

This is total BS. A bleeding heart Liberal writer for the JW writes an article about no masks at Allen Fieldhouse while the rest of campus is on mask requirement. Have not seen a sporting event on TV in a while where the entire crowd is wearing masks. Just proves an already proven point. 4 counties in this state believe they can run the entire state. And 1 newspaper thinks everything they write should be the mandate of the land.

unfortunately covid has no poltical affiliation,True life is about choices for those who oppose the wearing of masks can stay home, those who oppose wearing masks but choose to because they want to attend the games will abide by the mandate.I am fully vaccinated and have had my booster ,but that was my choice .The end game is to stem the outbreak of the virus and not to make it a left or right issue. This virus has affected us all. Think back about the games in an empty AFH and if you liked that but that may be where were headed .

You have zero chance of avoiding infection from some variant of Covid, sometime. The only question is how you choose to prepare your immune system to defend the virus and what therapeutics you use. Masks and vaccines will not save you. Wear your mask past a popcorn stand. If you smell the popcorn, your mask won't stop the virus.

​Billy Billy Billy masks are not used to save you, they are to help stop you from infecting others. Catch up. Its not about the smell baby, its about your breath! (ps mints do not work) What rock have you been hiding under?

Vaccines actually do save you from dying, sorry to bring up the facts.

Free therapeutic advice for you Billy - please do not use the livestock tranquilizer from the feed store.

Honestly, I liked the following from Larry. Follow the approach of the Teachers Unions and our K thru 12 students, force the behaviors on the unwilling. Not sure how 'comrade RC' may feel. (?)

1) Behave!! It will prepare you for life as an adult drone staring at screens for hours: Google Experts agree, the one thing you need more of is screen time.

2) This will definitely not lead to a mental health crisis and surging suicides like it did last time: Additionally, it is sure to stop the spread of COVID-19, THIS TIME.

3) We will avoid face-to-face interaction which sometimes leads to free thinking: We are well aware of the dangers caused by free thinking, aren’t we comrade Rodney?

4) You will see a slight reduction in wedgies: Incessant bullying will be limited to older brothers.

5) It will be easier for KU teachers to hide a Bloody Mary in cans of Diet Coke: And the little brats will stop asking why instructors smells like booze.

6) If you fail to comply representatives from the teachers union (Ushers in this case) will stop by with some very convincing points: A few points included lead pipes and shattered patellas.

7) Stopping the spread didn't work last time, and so why change what didn't work?: This is the official motto of Kansas Athletics & the U.S. Department of Education.

8) This will be the perfect transition to homeschooling in dorm rooms: Plus, it will usher in traditional high expense learning and family structure as women are forced to abandon the workforce.

9) Eases students and society into eventually being plugged into the Matrix: It’s inevitable, but at least the steak will taste nice and you’ll know Kung Fu.

10) Fewer referees will be boo'd and fewer Chicago kids will get shot on their way to school: Actually, this one makes sense

Cool, I got Q bingo and Tucker bingo on one post. If you would have mentioned the JFK is coming back in Dallas thing, or that the Earth is flat stuff, I could have swept the day.

ps- just in case you missed it - Denmark has the 3rd highest 7 day Covid hospitalizations per million reported on Jan. 9th 2022 in the entire world. They are behind the UK and they have half as many as the USA (#1). There are about 6 million people there. 68.5m in the UK and 333m in USA

Sorry I know you hate facts. Especially when they show you do not know what you are talking about.

Sae used Denmark a short while ago on here as the poster child for how to deal with Covid. I had to point out to Sae, the "just shoot from the hip you will hit something fool", that Denmark is actually in trouble. So picking them as the poster child was an uninformed and nonfactual example to use.

I am unsure what context you want me to explain those other countries. You did not share why those countries. What side are you on, nor how or why I should care what you want. None of those were in the top 3.

What stood out to me about the worldwide data published yesterday, was that Denmark, Sae's Denmark, was number 3 in the world in the 7 day rolling data.

If I don't help Sae to learn, who will at this point?

The process for enforcing this has left off a couple of levels.

Having seen first hand how frustrated people get when told to wear a mask, this has train wreck written all over it.

If you are seriously going to try to enforce this on fans, as it escalates, and it will, there will be single or a small pockets of resistence, and a Jan 6th US Capital level with screaming and Braveheart screams of FREEDOM!!!.

My take - they will try to get people to comply, and when it turns into shouting and throwing things the Allen staff will back down.

Well 75% of everyone in the hospital right now in the USA are unvaccinated. Deaths are down, the vaccine is the part of the reason. Omi is not your parents covid variant. It is upper respiratory, this is bad for children, easier to fight for adults. So deaths are down. It is much more contagious.

Masks protect you from spreading covid to others, not from others who are spreading it. Since a lot of folks do not wear masks, those folks are the ones spreading covid.

Awake enough for you?

This is ridiculous, and my original post to read "f*ck a mandate" was censored

Matt - Thanks for the article. It’s well done and noteworthy even if the topic is more pandemic pandemonium.

Musing: I realize the mantra is, the mask is about protecting others not yourself, but when did cloth become directional; aerosol can go in but not out? Or is this residual from the droplet nonsense that was disproven almost as soon as presented?

How many times have we heard during the past 2 years, just a little while of x, y, or x and this will all be behind us?

Or, which of the emperor’s new suits do you like best?