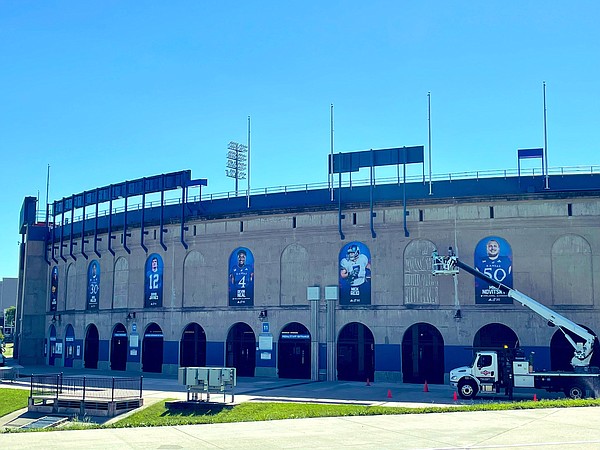 New images of current and former Kansas football players were being put up on the outside of David Booth Kansas Memorial Stadium on Tuesday morning. by Matt Tait

As Kansas football fans wait for the start of a new stadium project of some kind in the future, they’ll have to settle for a new look to the current stadium for now.

The outside walls of the north bowl at David Booth Kansas Memorial Stadium received a new look on Tuesday, when 21 new photos of current or former Kansas players and coaches were plastered to the outside in the arches on the concrete above the gates.

The list of current players to have their photo go up on the outside of Memorial Stadium this season included: Caleb Sampson, Mike Novitzki, Devin Neal, Rich Miller, Kenny Logan, Mason Fairchild, Earl Bostick Jr. and Jalon Daniels.

Each photo went up in four sections and measured roughly 15-16 feet tall by 7-8 feet wide. Some of the former players added this week were already up there in past versions of the display. But all of the current players were new to the wall.

When asked about the honor during Tuesday’s media availability, some of the current Jayhawks had only heard about the pictures and were on their way to see them.

Senior safety Kenny Logan Jr. was one of them and he said he had been told his photo was going up.

“It’s definitely exciting and cool to see,” Logan said. “Hopefully I can get it where it’s permanent one day.”

Novitzki, a senior center who is now in his second season with the program, said he was appreciative of the gesture and that it was by far the biggest photo he had ever seen of himself. Until this one, the biggest in the past was a 6-foot by 3-foot banner they stuck to the stadium during his senior season of high school.

“It’s a great honor,” Novitzki said. “I’m so thankful for it and it’s just really cool that they decided to do that. With all the history with this program throughout the years, to be associated with that is just a great honor.”

Neal shared that sentiment and said it was even more special because he had grown up in Lawrence and passed by the stadium so many times in his life.

“That’s kind of one of those blessed feelings,” he said. “You can’t make stuff up like that. Being able to drive around and see that and have my family and friends see that, it’s a pretty cool feeling.”

Miller, another Buffalo transplant like Novitzki who is in Year 2 with the program, said he hoped he one day would be able to keep the giant image.

“I’m not going to lie,” he said. “That was the first time I’ve ever really felt myself getting excited. I was like, ‘Wow, that’s a surprise.’ They didn’t tell me nothing. I’m like, “What did I do to get on this building?’”

While some notable names from past KU teams appear to be missing, don’t freak out just yet. There’s been chatter of another collage of former players that may go above the entrance to the stadium on the west side, below the press box, where a dozen or more other former KU greats may soon appear.

Don’t be surprised if that’s up in time for Friday’s season opener.

While I haven’t heard yet who will be included there, I think it may be tied to KU’s ring of honor, which would mean players like Todd Reesing, Darrell Stuckey, Chris Harris Jr., Aqib Talib, Bobby Douglass, Anthony Collins, Curtis McClinton, Willie Pless, John Riggins and more could also so be going up.

It may not be a shiny new stadium, but it does provide the old stadium with a fresh look while paying homage to some of the great names from KU’s past.

Here’s the west side of Memorial Stadium with the new photos, a mixture of past & current players… #KUfball pic.twitter.com/2UgMdKzOge

Here’s the middle behind the north bowl, with a few featured all-time greats… #KUbball pic.twitter.com/ItvK8tB7fz

And here’s the rest that are ready to go up, with a nice nod to Glen Mason at the end… #KUfball pic.twitter.com/RgWYTJYtCG

I’d also look for something honoring #KUfball’s past & former players to fill this space before Friday night’s opener. West side, below the press box, above the entrance… pic.twitter.com/uTl91PWKWj