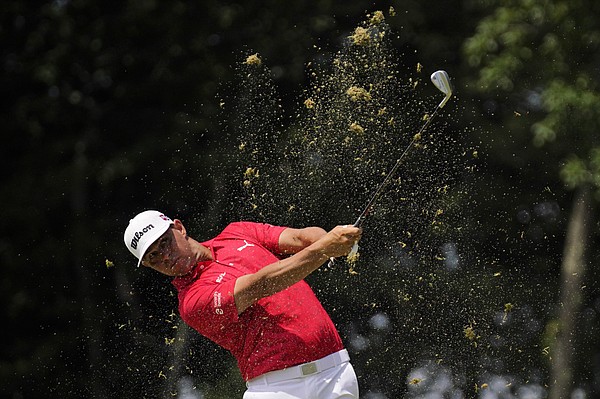 Gary Woodland watches his shot on the 11th hole during the second round of the U.S. Open golf tournament at The Country Club, Friday, June 17, 2022, in Brookline, Mass. (AP Photo/Robert F. Bukaty) by Matt Tait

Former University of Kansas golf standout Gary Woodland saved his best for last at the St. Jude Championship, site of the first round of the 2022 FedEx Cup playoffs.

But it was not enough to advance Woodland to Round 2 next week.

After back-to-back 1-under 69s to just make the cut on Thursday and Friday, Woodland shot 73 on Saturday to fall toward the bottom of the leaderboard. He followed that up with a 4-under 66 on Sunday and finished in a tie for 51st.

Unfortunately for the Topeka native, his overall performance at St. Jude, along with that of others in the field, bumped him to No. 75 in the FedEx Cup Playoffs and Eligibility Points List through Sunday. Only the top 70 qualified for next week’s second round at the BMW Championship.

Perhaps sensing he had to go for broke, Woodland came out on fire on Sunday morning. He birdied four of his first five holes, including No. 1 and a three-hole stretch from No. 3 through No. 5.

He gave two of those back before making the turn, with bogeys at Nos. 7 and 9 and then ripped off another stretch of three consecutive birdies on holes 12, 13 and 14.

In all, Woodland hit 12 of 18 greens in regulation on Sunday and carded seven birdies, three bogeys and eight pars, leaving him at 3-under for the tournament.

Here's the complete list of the 70 golfers who advanced to Round 2.