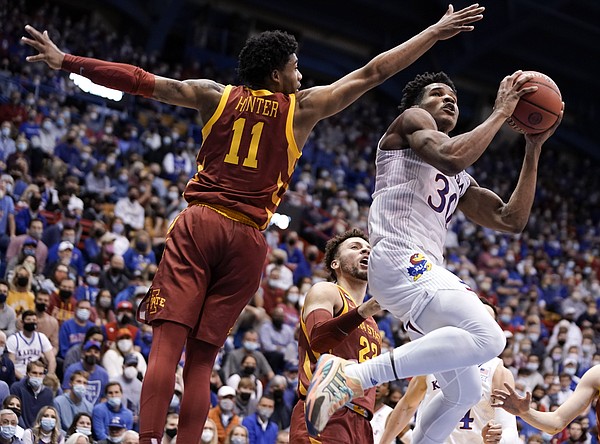 Kansas guard Ochai Agbaji (30) ducks under Iowa State Cyclones guard Tyrese Hunter (11) for a bucket during the second half on Tuesday, Jan. 11, 2022 at Allen Fieldhouse. by Nick Krug

Iowa State guard Tyrese Hunter released his top six schools on Monday afternoon and the defending national champions were on the list.

Joining Kansas in the push to land the talented guard are: Tennessee, Louisville, Gonzaga, Texas and Purdue.

Regarded by some as the top player to enter the transfer portal this offseason, Hunter figures to be a huge pick up for whichever program lands him.

While none of those offensive numbers jump off the page at you, Hunter is known for his defense and ball-handling ability. He seemed to be at his best during the most grueling parts of the Cyclones’ Big 12 slate, going toe to toe with talented offensive players night in and night out.

His pressure on the perimeter made life tough for just about everyone he guarded and he earned Big 12 Freshman of the Year honors as a result. He also was a unanimous selection for the Big 12’s all-freshman team last season.

The two most interesting names on that list are Louisville and Texas Tech. Louisville because the Cardinals, with new head coach Kenny Payne, are back in the mix this time around. And Texas Tech because that offer came from then-TTU coach Chris Beard, who is now the head coach at Texas, which is also on Hunter’s list of six finalists.

As that list suggests, the word about Hunter entering the portal was that he was looking for a prime time place to showcase his talent.

It’s worth noting that former Iowa State head coach Steve Prohm did most of the work in recruiting Hunter to Ames, Iowa, and current ISU coach T.J. Otzelberger found a way to keep him committed after taking over.

Clearly, Otzelberger was a fan.

“Tyrese is a gifted player,” Otzelberger said after the Cyclones’ Sweet 16 loss to Miami in Chicago last month. “He certainly matured as the season moved on, did a great job commanding our team, proved that there’s no task too big for him even though he’s a freshman. Plays with a poise and composure beyond his years.” In two games against the Jayhawks last season, Hunter averaged 10 points, 3.5 assists and 3.5 steals per game while playing 31.5 minutes. In the game in Lawrence, his five steals and five assists nearly led to an upset road win. That was the game that Dajuan Harris Jr. hit the off-balance layup — over Hunter — in the final seconds to win it for the Jayhawks.

Although the two battled against each other last season, the idea of Hunter and Harris pairing up at KU and making life miserable for opposing guards has a few national basketball analysts thinking big things for the Jayhawks and Hunter if he were to choose KU.

“Hate to see (Hunter) leave (Iowa State),” ESPN broadcaster Fran Fraschilla tweeted over the weekend. “But if he ends up at (KU), he reminds me of former Jayhawk Tyshawn Taylor. He’d be (a) National Defensive Player of the Year there.”

Added Stadium’s Jeff Goodman after Hunter’s list came out on Monday: “Will be a HUGE pickup for any of these schools. Might be the best player who has gone into the portal this year.”

A year ago, many believed that player was Remy Martin, who elected to leave Arizona State and landed at Kansas. Although Martin was all about offense and Hunter seems to be more defensive-minded, the impact could be similar should Hunter pick KU because the Jayhawks would be adding a dynamic, play-making guard with all the confidence in the world.

According to On3.com's Joe Tipton, Hunter has plans to visit Tennessee this weekend and Gonzaga the following weekend. As of now, there is no known timeline for a decision to be made.

KU's roster remains a bit in flux, with three players testing their NBA draft status over the next five weeks. KU could have an open scholarship if either Christian Braun or Jalen Wilson chooses to stay in the draft after the June 1 deadline to withdraw. But even if they don't, the bottom line here is that if a player like Hunter wants to come to Kansas, the coaching staff will find room for him.

How sweet it would be if Tyrese did what JCL did and rejected the Cry-Clowns in favor of the Jayhawks!

If Hunter comes can we consider ISU a farm team for KU?

Alex - Enaruna went to the minors last year allowing us to pickup JCL.

Do we really need another defensive minded 6’ PG?

"But even if they don't, the bottom line here is that if a player like Hunter wants to come to Kansas, the coaching staff will find room for him." Not a fan of this mentality. Who do we nudge out the door if we need a scholarship for Hunter? Yesufu? Cuffe? Would love to see him here if we have a scholly to give, but totally disagree with the practice of running guys off who have already been on the team for a year.

settle down. there is 0 chance-ZERO-he comes to ku. we have Plenty small guards & were not kicking anyone out. if he was 6'6", maybe. but, no. just, no. dont get ur hopes up, we dont need him. we have a Great class coming in & its fkn ludicrous to think he'd come here. its more unhinged to think we'd want, or need, him. were good. were fine. hes from WI so he should go play for the Badgers. hes using ku to bolster his list. were gonna be fine. let him go to #On. or wherever. just Know, hes Not playing at ku. get over it. RCJH

I want Pettiford to show what he can do next season. Also, I really like the potential of Yesufu but I would gladly take Hunter. I would love to see an attacking guard duo to harass and steal the ball at midcourt like Robinson and Chalmers used to do.

Remy was the best player in the portal. I know he didn't start, but zero chance we would have won the natty without. (The TV analysts were right on this.)

Maybe this guy could come over and be the 6th man as well.

It would be awesome to win the transfer portal prize two years in a row. It would seem like a nice reputation to get since we have not been the number one incoming high school recruit class in quite a while.

That said, with coach Self having the best coaching reputation in college basketball now that K and Wright are out, I am hoping Self starts getthing the top recruiting class as often Duke and KY have in the past.

Bob - Pettiford did show what he can do, it was just so early no one beyond the program really noticed.

While the tone isn’t preferred, pizzaboys opinion is accurate. Maybe Coach reached out as he would to any top player to cover his bases, but we have a wealth of small guards, including experienced guards.

Unless CB leaves, we have plenty of wings as well, and experience as well. What we don’t have is an experienced big. Maybe if Cam has learned to play D, but it’s all potential and/or undersized players after that. It seems to me we need a David/Mitch replacement, or maybe the new/newer guys blossom.

Conversely, the Badgers have 0 percent, because they failed to make his list.

Admittedly, either Braun or Wilson has to commit to the NBA to open a roster spot.

Any time you can get a good player, you at least consider it. Scholarships can be figured out. But I don't think he's coming here. Just my gut he'll go to Louisville or Purdue. I think both those teams have an immediate need for guard.

Chad - Not sure about Lville, but Purdue graduated both their 1&2 PG so lots of opportunities there. They had been in consideration for a couple pgs that already transferred.