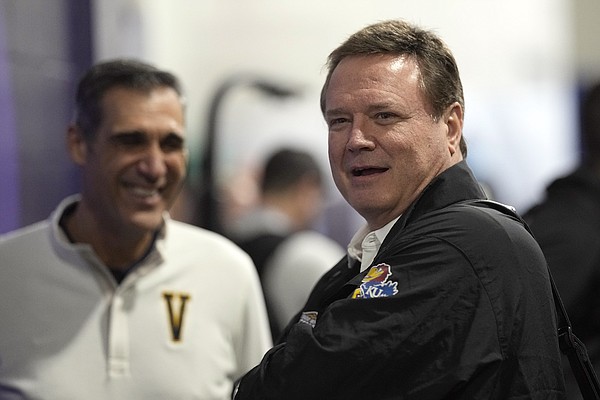 Among many other things, Villanova basketball coach Jay Wright’s shocking retirement on Wednesday night should go down as the latest reminder that you never know what’s going to happen in the world of sports.

Wright’s move was not the first such reminder, nor will it be the last. But it is one of the more unexpected. At least from the outside looking in. And it means that fans of every coach in every sport, from Bill Belichick to Bill Self and everyone in between, would be wise to brace themselves for a similar move from their favorite head coach at any time.

“He will be missed,” Self said of Wright in a text message to the Journal-World late Wednesday night. “He’s so good for our game. Class guy. As good a coach as our sport has.”

I can’t imagine very many Villanova fans saw this one coming, especially not after Wright just led the Wildcats to another Final Four, this one as a 2 seed with a team that was not talked about a ton throughout the regular season.

That feat is a clear indication of Wright’s ability as a coach and program builder. The blueprint is simple: Create a culture, remain consistent and give everything you’ve got to running the program the way you believe it should be run.

That’s easier to type and say than to actually do. But Wright always made it look easy.

Now, both college basketball and the Wildcats will move on without him, as he joins Hall of Famers Roy Williams and Mike Krzyzewski as coaching legends with multiple national titles to call it quits in the past 13 months.

That leaves Self as the lone active coach with more than one national championship. Iona’s Rick Pitino won one at both Kentucky and Louisville, but the Louisville title in 2013 was later vacated by the NCAA.

When Williams left the college basketball world shell-shocked by abruptly announcing his retirement on April 1, 2021, it caught just about everybody off guard.

It also seemed to be the perfect decision at the perfect time for both Williams and North Carolina.

I saw Williams in both Fort Worth, Texas and New Orleans during the Tar Heels’ recent run to the national title game — not to mention at Allen Fieldhouse when he returned for a KU game in January — and he looked young and vibrant, like a man at peace with his decision to step away and happy to be living the retirement life.

Those numbers, other than the age, are closer than I would’ve guessed, which speaks to the fact that it sure seemed like Wright had at least another 5-10 years in him, much the same way I think Self, at 59, still has that type of longevity in him.

Wright proved this season that he was still as sharp as ever, and his team and players, once again, competed the way he always hoped that they would.

Nova’s trip to the Final Four capped a seven-year span that saw him win two titles and appear in three Final Fours in the six most recent NCAA Tournaments he coached.

Heading into the week, one could debate Wright vs. Self for the title of best active college basketball coach for a long time and never arrive at a wrong answer. But that type of production in a seven-year span is as good as what anybody’s ever achieved, short of John Wooden, of course.

Coaches across the country have always had nothing but good things to say about Wright — the coach and the person — and it was clear that, with Williams and Coach K no longer around, Wright, along with Self, were at the top of the class in terms of both longevity, accomplishments and reverence.

Consider this comment from Self, just a couple of weeks ago, before facing Wright at the 2022 Final Four.

“I think Jay’s teams, if you were to ask coaches across America that played against him, they’d say they’re unbelievably sound, they’re fundamental, they don’t turn it over (and) you have to beat them,” Self said. “They don’t beat themselves. In our sport, there’s probably more games lost than there are games actually won, and they’re not going to help you beat them. That would be a great compliment if anybody ever said that about my teams. They probably don't, but if they did, I would take that as a compliment because obviously they’re very, very good and sound.”

In a statement from via Kansas Athletics on Thursday, Self, who is 4-5 all-time against Wright, offered sincere congratulations for Wright's latest career move.

“Jay has been a pillar in our profession for a long time," Self said in the statement. "He is truly a class act and our profession will miss the way he has represented it. I wish him the best in whatever he chooses to do in retirement. He deserves and has earned it."

Self continued: "I believe Jay and I have had a very friendly rivalry, one of respect and appreciation for how the other teams always played. It was easy to shake hands with Jay Wright after a game, regardless of the outcome.”

For all of the things that Wright was known for as a basketball coach, the thing I’ll remember most about him is how thoughtful he was with every answer he gave when being interviewed.

I saw him at the podium a dozen times. I watched him on television more than a few times. And I even grabbed him for a phone interview a couple of times. Not once did he mail in an answer.

It did not matter what the question was, who asked it or how much time he did or didn’t have, Wright always seem to respond as completely as he could and genuinely tried to answer every question.

I know that means more to us media types than it does to fans and players, but I think it also provides a glimpse into why he was so successful and why his players loved him so much.

Self and Wright are similar in that way. And college basketball was always in such great hands with those two on the sidelines.

There are still plenty of great coaches out there, and there are several up-and-comers who seem to be sitting on the brink of becoming big time.

But it’s not every day that a guy like Wright walks away.

His retirement is a good reminder for fans to appreciate what they’ve got while they have it. Because you just never know what the next chapter will bring or when the one you’re currently enjoying could end. 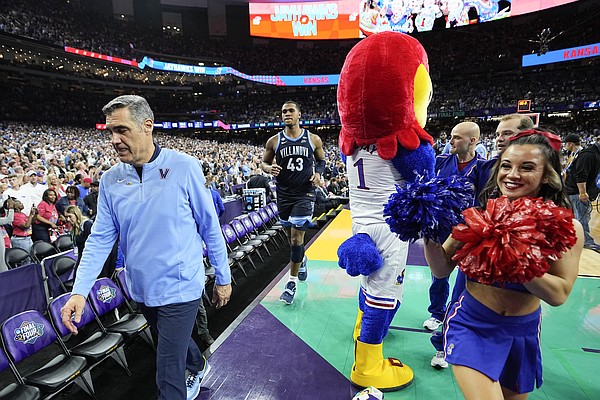 Nice article. It's wild.... Two years ago, if you asked who the best four active coaches were in college basketball, it would be an easy answer for anyone with knowledge. Only one of those four remains now. I don't think there'd be much agreement on the other three if you asked the same question today.

I invite other fans' responses to that query.

Pure class. One of the few coaches with multiple rings and no scandals. He did it the right way.

He was obviously one of the greats.

Very surprised that he's retired from coaching at 60.

Jay Wright was always the best dressed coach. He was like a male model!

Keith - if you think Jay Wright is pure class, Mario Chalmers and Sherron Collins would like a word with you.

I'd reply to you directly, but the damn REPLY button is STILL. NOT. WORKING.

Bryce, that's a good laugh. That must've been the last time that Jay Wright volunteered to as a head coach for Team USA.

Certainly a class act and one who choose no to do a final run and last stop hurrah going out. As to Roy looking "young and vibrant", he looked really old and tired every time I saw him. I hope he is in good health, but he sure doesn't`t appear to be at age 71.

The ESPN article comments on him, Calipari, and Izzo being the only coaches with 4 FFs since 2009.

I hate when time frames are chosen to purposefully exclude results and skew perceptions. One more year and Coach Self is included.

Good point Dirk. Wouldn't have made Jay look as good if they'd gone back another year because then they'd have to say Cal has 5!

Leaving Self/Cal out - It's all about clicks, not fairness, not facts, just plain ol'e snake oil selling at its very best.

There has to be some coaches that I am missing, but with those 8 you have guys who have proven to be essentially fireproof, aside from Pitino and Sampson who effectively burned their own houses down when they were in the major leagues.

Funny how different Sampson's violations sound 16 years later... he basically was penalized for too many phone calls to recruits while he was at OU. But he still got hired at Indiana where he was quickly fired and sanctioned for talking to recruits. Not too long after that the NCAA basically lifted all of the ridiculous phone call and text message limits for recruiting. https://www.espn.com/mens-college-basketball/story/_/id/8054728/ncaa-deregulates-texts-calls-college-basketball-recruits

With the retirement of Coaches K, Williams and Wright, the leadership into a new era for college basketball and basketball in general falls on the University of Kansas and it’s Head Coach Bill Self

Liked his persona as a coach, good to hear that it was probably genuine. Hell of a team concept coach, seems like he's been kicking our butts consistently since 2014 or so. Glad we got our revenge win against them before he took off into the sunset, too!

Jonathan - Cal isn’t squeaky either. UK$ has helped clean up.

Though both Drew and Bennett have won, I’m not a fan of either. Bennett’s will always have an asterisk; won on an obvious missed double dribble call. Should have been TTU’s and 3 (4) in a row for the Big12.

I think Few will have a bit of an asterisk by his name simply because he’s coaching in the minor leagues. The kids in the back row need some love too, but i’s tough to drive the bus if you’re not up front.

Izzo’s championship was a long time ago. Where have all the others gone?