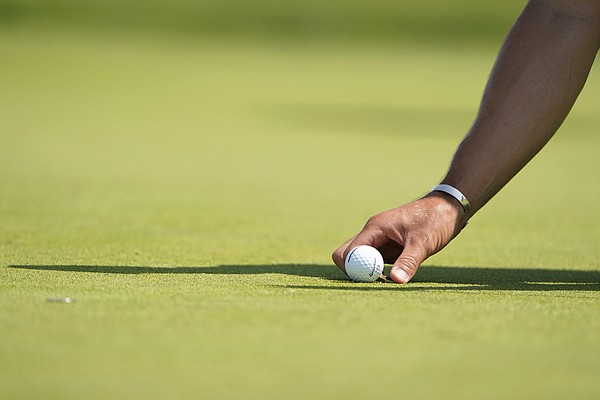 Gary Woodland places his ball on the fifth green during the first round of the U.S. Open Golf Championship, Thursday, June 17, 2021, at Torrey Pines Golf Course in San Diego. (AP Photo/Jae C. Hong) by Matt Tait

Former University of Kansas All-American Gary Woodland played a clean front nine in 1-under par and struggled to get home from there, finishing Round 1 at this year’s U.S. Open at 3-over par and in a tie for 79th place.

Play was suspended due to darkness late Thursday so several golfers still have to finish up the first round before Round 2 can begin on Friday.

Woodland, who won the event two years ago for the first ever major championship by a Jayhawk, played 10 holes without a bogey on Thursday.

That brought to mind his stellar U.S. Open in 2019, during which he carded just four bogeys total in 72 holes, including a bogey-free second round and long stretches throughout the tournament of bogey-free golf.

Those memories on Thursday, however, were short-lived. Starting with the 11th hole, Woodland bogeyed five of the next seven before carding a birdie at 18 to put him at 74 for the day.