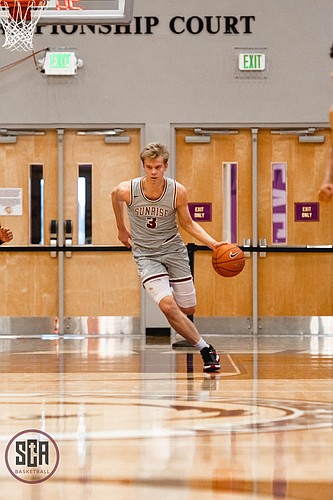 Kansas basketball commitment Gradey Dick added a gold medal to his collection of basketball hardware over the weekend.

Dick, a five-star prospect in the Class of 2022 who orally committed to KU in March, teamed with Duke commitment Kyle Filipowski and Baylor commitment Keyonte George and IMG Academy's Eric Dailey Jr., in leading Team USA to gold at the Under-18 3-on-3 World Cup in Hungary.

The event has been going for the past decade but the United States did not send a team until 2019. That year, the Americans won gold. And, after a cancelation in 2020 because of the pandemic, Dick and company put the U.S. team back on top again, making it two-for-two for the Americans.

Dick, who also has USA Basketball experience from minicamps he attended in 2019, was a highlight machine throughout the event.

He showed off both his outside touch and his ability to attack the basket in helping lead his squad to a 6-0 record and the gold medal.

Team USA knocked off Estonia, 21-14, in the gold medal game on Sunday, keeping alive its streak of not allowing a single opponent to top 14 points in the games played to 21.

Dick, a Wichita native, will now return home to begin his senior season at Sunrise Christian Academy in Bel Aire. After a standout career at Wichita Collegiate to open his prep playing days, Dick played his junior season at Sunrise, filling a reserve role on a team loaded with Division I commitments.

This year, he is expected to have a much bigger role for coach Luke Barnwell’s team, which consistently plays a tough national schedule and generates all kinds of exposure for its players.

A perfect Pool Round for @usab3x3 Men’s as they book their place in the #3x3U18 World Cup quarterfinals!

None by USA Basketball 3x3

That’s the way to wrap up a quarterfinal dub!@gradey_dick22 ➡️ @_edailey3 💥

None by USA Basketball 3x3

🇺🇸@gradey_dick22 not giving up on the offense as he finishes with the huge flush for @usab3x3!#3x3U18 pic.twitter.com/vpDxVAfkGV

Hope he plays for us.