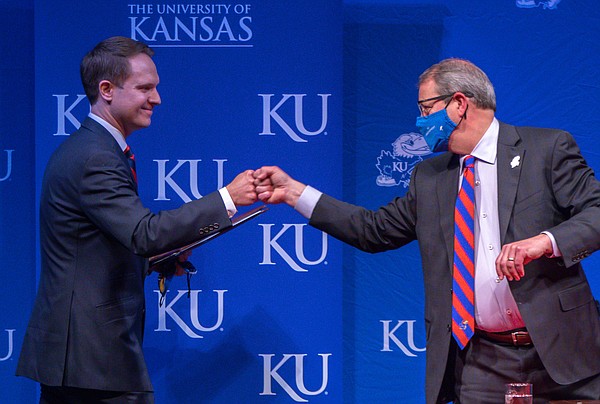 Travis Goff, a 2002 graduate of the University of Kansas and native of Dodge City, left, fist-bumps KU Chancellor Douglas Girod, right, on Wednesday, April 7, 2021, at the Lied Center on KU's west campus. by Mike Yoder

Now that all of the introductions, handshakes and pleasantries have subsided, new University of Kansas Athletic Director Travis Goff can fully immerse himself in the job of finding KU’s new football coach.

And the place he should start is on the telephone.

If it were me sitting in the AD’s chair, the first three phone calls I would make would be to Mark Mangino, Glen Mason and Clint Bowen.

Not to gauge their interest in the job, of course. But to pick their brains about the position itself — its challenges and hidden secrets and the traits that they believe are most important for the man who calls himself the next Kansas football coach.

The reason for the calls to Mangino and Mason are obvious. As two of the most successful coaches in school history, both men have unique insight into what it takes to build and sustain success in Lawrence.

The call to Bowen, who is now out of the college game and preparing for his first year as the head coach at Lawrence High School, is also essential because he was there for those two successful runs — along with a few failed stints — and because there aren’t many people on the planet who care about the program as much as he does who can offer the kind of insight into the highs and lows and dos and don’ts of rebuilding the program as he can.

Goff, who was hired and introduced last week, said he came to Kansas with an open mind and that he would spend the early portion of KU’s coaching search getting the lay of the land and finding out exactly what Kansas football needs from its next leader.

He also said, in no uncertain terms, that there was a plan.

If the plan, at least in large part, is to come in and evaluate the landscape by talking to as many people as possible before setting out to find the coach who best fits the position, personnel and current problems, Goff is well on his way to making a quality hire.

That certainly seems to be what’s happening.

Sources connected to all three coaches told the Journal-World on Monday that neither Jeff Monken, Willie Fritz nor Lance Leipold — three of the more popular names tied to the opening in recent weeks — had been approached by Kansas as of yet.

That’s not to say they won’t be. Remember, Goff started less than a week ago.

The smart money is on all three getting a call at some point. And all three make plenty of sense for the position on paper and are quality, proven coaches with a history of success.

But there remains a lot of work to be done before candidate phone calls and interviews take place. As long as he’s doing that work, that should be viewed as a good sign of Goff’s ability to do the job.

The instant gratification crowd among KU’s fan base may have preferred it if Goff were introduced last Wednesday with a candidate in mind so he could announce him as KU’s new coach on Friday or sometime today. Bing, bang, boom!

But that would’ve been hasty and probably would not have delivered the best fit for Kansas.

Simply put, the more thorough the approach the better Goff’s chances are of getting the hire right.

And the three names listed above are merely a starting point for that approach on a list that includes current and former players, current and former administrators, fans and donors, other coaches, media members and more. It's possible, perhaps even likely, that Goff and his staff also will use a search firm — perhaps the same TurnkeyZRG group that helped KU find Goff — to help them identify candidates and finalists for the position.

A case can be made for talking to too many people and getting too many opinions in a situation such as this. But as long as Goff uses the input he gets to shape his own opinion about who to hire, the more the merrier.

Appreciate this article. I do like the list of people to talk to from the coaching experience. I might not be the biggest fan of Bowen, but I do think it would be a great call to make; never would want to question his devotion to KU football over the years (maybe no one else has been as invested as he was). I think there has been at least a mend of the fence with Mangino and we have to end that curse soon, so continuing to build on that would be great.

Out of curiosity, with Goff being the AD, would Pat Fitzgerald be in the mix? Not sure if he would be the top choice or even an option, but with the ties, I just wonder.

I saw a list with 40+ names on it and some were unusual, but the three you mention seem to be consistent (Fritz, Leipold, and Monken). I would want Randy Shannon on the list of options as well.

That's my take right now. Since you aren't putting out a wheel yet...I figured I'd start it out.

Pat Fitzgerald is so committed to Northwestern that he turned down a chance to interview with the Green Bay Packers two years ago. He ain't moving to Lawrence.

If Travis Goff does anything less than a nationwide search for a coach who can do the simplest of things, then Travis Goff should be fired. Along with Major Milktoast.

That press conference? Anyone? Anyone? My front porch is a better motivational speaker than the guy who can’t take off a mask.

How did we allow ourselves to sink so low to let Major Milktoast get TWO tries? Because of his charisma?

Have any of you seen the campus lately? It looks like a junior college. The primary flower is a Dandelion. This nimrod doesn’t even know how to manage a lawn.

Get it right or get out of the way.

Calling jaybate, calling jaybate . . .even if out of the grave. Arise jaybate. Help us, we beg. Please cast your guidance upon us so we can understand how a persons skin color and dandelions - can bring us a winning team on the gridiron.

Maybe you can guide us?

Because the simplest of tasks seems to have eluded Perkins, Zenger, Long, Weis, Beaty and Miles. See any connecting themes?

Millionaires who couldn’t get anything done.

Any ten year old could have done better. Literally.

But weak white man complex continues unabated. Persecuted. Trampled upon. Unable to get a black market stream of Wrestlemania.

Here’s a challenge for you. Don’t do the dumbest thing possible. It’s like the Twit of the Year contest. Try not to run yourself over. Or sleep with a 17 year old.

Off your meds again, Brett?

I can see conferring with those three about how to conduct a search, but frankly, I think we just make the decision and go w/Emmit and stop talking about it for a season. Just give him a chance. With all the baggage overhanging the athletic department, not all of it warranted, who would want to come here? Just give Jones our full support for a season, see how it goes. We don't have the resources or wherewithall after four coaches in the last 12 years to fork over even more cash for a new coach.

Give Jones the confidence he needs to move forward 100% w/o having to worry about if he's going to be in charge tomorrow. We can't possibly do any worse than we have.