Relax; Not all is lost with Andrea Hudy leaving Kansas basketball 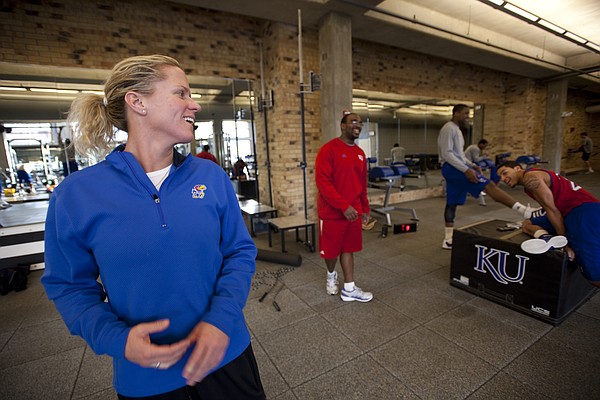 Let’s take a rational look at the news that strength coach extraordinaire Andrea Hudy is leaving the Kansas basketball program, shall we?

OK. I get it. A lot of you are out-of-your-minds upset — both angry and emotional — about the news of Hudy’s departure, which first surfaced late Thursday night and leaves the Jayhawks looking for someone to take over their strength program less than three months shy of the start of the 2019-20 season.

Tough news, to be sure. Especially when you consider that she’s going to Big 12 rival Texas. But, really, can you blame her there? Austin is an amazing town and UT has as much money, both to pay its coaches and to spend on facilities and programs, as any school in America.

If ever you’re going to make the tough decision to move on from a powerhouse program like KU, heading to a place with twice the annual athletic department budget seems like a good way to do it.

While Hudy’s departure may sting today, it’s not as if this is some sort of catastrophic blow from which the program will never recover.

Hudy is as good as it gets in her industry. And her talents, both as a strength coach and an ambassador for the program, likely will be missed by everyone associated with Kansas basketball.

But, as the saying goes, all good things must come to an end. And this certainly feels like one of those moments for KU, the athletic department and the men’s basketball program.

There’s no debating the fact that Hudy’s contributions to Bill Self’s program during the past 15 years have been huge and played a key role in helping the Jayhawks achieve the nearly unprecedented success that they have achieved. But there’s also little doubt that Self and the powers that be at KU will bring in a quality replacement more than capable of filling Hudy’s shoes.

Things might look different. And the process likely will not be the same. But there’s no reason to think that the results will not be.

Remember, this is Self’s program. And everything that goes into it, from strength training to recruiting to travel plans to what’s on the table for team meals, is dictated by Self. And that’s how it should be.

One of the things that makes KU’s Hall of Fame coach so good at his job is his ability and willingness to empower others to be themselves to get the most out of KU’s players.

He did that with Hudy. He does that with his assistants. And he’ll do that with the new strength coach, whoever he or she may be.

As explained when KU shifted to a new health care structure for its student-athletes known as Kansas Team Health three months ago, all hirings and firings involving any sports medicine employees will now be a joint effort made by both the head coach and athletic department and the medical professionals who now oversee KU’s strength and conditioning in all sports.

KU Athletic Director Jeff Long called that "a shared responsibility," and added: “(The) coach is still involved in the hiring but there’s others involved, as well, to make sure that that strength coach or that trainer has the proper credentials and understands our model and can operate and work in our new model.”

That could make things a little more interesting as the Jayhawks seek to replace Hudy. But that’s more from the perspective of the people who might be interested in the job and less from the standpoint of how much say Self will have in who gets it.

I can't imagine a hire being made without Self fully endorsing it. And as long as that remains the case, there’s no reason to question whether the new Hudy will be worthy of the role. They will be. And they’ll be experienced and talented and qualified and ready to step into a big time job. It’s as simple as that.

Beyond that, the vast majority of the key players on KU’s current roster have spent at least a year or two working with Hudy. Given the timing of this news, it’s likely that they’ll take it upon themselves to keep the train rolling along in the weight room and conditioning department as if she never left.

If you squint hard enough, you might even be able to see a potential benefit there. The players taking ownership in the weight room and even bonding over losing their training leader could pay dividends on the court with team chemistry, as well.

Besides, the change that will inevitably come figures to be more of a gradual one that takes place over time. With as many as six players on this year’s roster potentially leaving at the end of the 2019-20 season, things will happen naturally in terms of transitioning from the Hudy way of doing things to the new way.

In relatively quick fashion, it will reach the point where the bulk of the players on the KU roster will never have worked with Hudy at all and the new strength coach, whoever it is, will be able to roll with his or her game plan as if that’s the way it’s always been.

Self and his family are currently on vacation and this news no doubt threw a wrench into his ability to fully get away. But there’s also no doubt that he already has started brainstorming what direction to go and what calls to make.

Because of the involvement of Kansas Team Health, this hire might take a little longer to complete than it would have in years past. But I wouldn’t expect it to take forever to complete even with that in play.

The line to replace Hudy will be a mile long and it will be full of quality candidates who are over-the-moon excited about the opportunity and ready to prove themselves on college basketball’s biggest stage.

That and the fact that the replacement will be working for Self is all the program needs to sustain the excellence we’ve seen for the past few decades.

Best of luck to her but not the Longhorns. I'm petty what can I say haha! That said I have to wonder, and I may be way off base, but I have to wonder if there's any tips or info she may give to the Longhorns to give them a slight edge on us. I'd hope not but you never know. :/ . Rock Chalk

If Self doesn't have full decision rights into the hiring, then that would be something that would drive him away. I think this is far from a surprise for Self and he has a shortlist of candidates already in line...at least that is my guess.

You know it's the slowest news day of the year, when people care about a strength and conditioning coach leaving. Everyone is acting like she took a bunch of out of shape rec league players and turned them into the monsters from Space Jam year after year!

I'm not at all pleased about losing Hudy. In fact, I'm incensed. But I felt this same way when Roy Williams left, and that actually worked out to the better for us.

My question is WHY is Hudy leaving? The new reporting structure causing pains for her, maybe someone there trying to dictate to her? Or is it $$? Or did she find a guy in Texas? She's not married, right?

I really don't get the "supposed" KU fans that are not upset or concerned over " a strength n conditioning coach" leaving. Apparently those "fans" don't understand her impact on this team. Many players have actually chose KU because of HER! She is well regarded as one of the top 3 in the Country in her field! She is a huge loss for us and a tremendous gain for Texas. I wish her the best and hope we can get someone with tons of creditability and can continue her successful change of college players endurance and physical strength. So yes, even if it was a huge news day this is a huge story. RCJH!

Please give us names of who came her because of her?

Matt - Rational? You want us to be rational? Aren’t we supposed to be irrational?

First we do appreciate the work she has accomplished. Sometimes a different area or place might gain interest. There is no doubt Texas has ability to pay huge salaries with their private website paid by ESPN. There will be others that can do a great job. Success for our team will be determined by how successful recruiting players happens.

Austin great town ... but Shaka and UT will never win it all Period I actually like to see Texas do well in tourney but , Shaka pulls some bad moves .. maybe worse than Scott Drew. ... hey big money living in Austin .. Have fun you deserve great things ! Just not in basketball in big 12 he he

Matt, you are missing the point. This appears to be an unnecessary loss of a very important part of the basketball team because of a power shuffle. If Hudy is leaving because she would have reported to 'medical professionals" rather than Bill Self, then we have screwed ourselves big time. Someone who is held as highly in her profession as she could have left and gone anywhere she wants. But she left after the department was "reorganized." Why? You're the journalist. Find out!

And I'm not missing the point at all. I get the magnitude of this. I just wanted to make sure people were seeing all sides and could understand that it's not like (a) KU's going to have to go without a strength coach now or (b) they'll hire some junior high gym teacher to do the job.

What's done is done and there's no going back, right or wrong, good or bad, like it or hate it. But they're going to get a high-quality replacement and are much better situated to handle a huge loss like this than a lot of programs would be.

As you were. Thanks for reading and offering your thoughts. You guys are the ones who make this site what it is and we appreciate every last one of you!

as a retired junior high gym teacher I hurl unprintable words of vitriol your way...like, you're a Grantland Rice at the keyboard?

Still couldn’t get Dedrick or Landon to dunk. So what exactly was the benefit?

That’s a sincere question. Not disrespect.

This is just a fluff pierce penned by a reporter groveling at the feet of the KU power structure. The new healthcare regime caused this situation and Tait is writing this opinion piece to provide cover for the administrators.