Dedric Lawson: 'People are definitely going to see that I'm better than what they've got me projected' 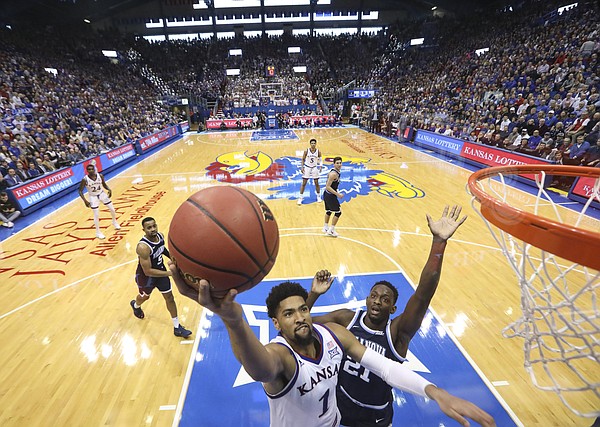 Kansas forward Dedric Lawson (1) gets in for a bucket past Villanova forward Dhamir Cosby-Roundtree (21) during the second half, Saturday, Dec. 15, 2018 at Allen Fieldhouse. by Nick Krug

Outside of his friends and family members, you’d be hard pressed to find too many people who believe Dedric Lawson is destined for a long and strong NBA career.

“He’s not explosive,” many have critiqued. “He’s too slow,” others say. “He’s a nice player, but he’s not strong enough to play in the league,” is another common breakdown of Lawson and his game.

None of it matters to Lawson, though.

“It most definitely fuels me,” Lawson told the Journal-World in a Monday afternoon phone interview from Los Angeles after declaring for the 2019 NBA Draft. “I’ve always been a guy who has been in the gym and put in the work, but when you see the naysayers and hear people say, ‘He’s not going to do this, he’s not going to do that,’ it just makes me want to put forth my best effort. It’s not that I’m trying to prove anyone wrong, I’m just trying to prove to myself that I do belong in the league.”

Most current mock drafts have Lawson slated as a second-round pick in the June 20 NBA Draft in New York City.

ESPN.com’s Jonathan Givony has him going off the board with the 43rd pick to Minnesota. And SI.com’s latest mock draft, which came out Tuesday morning after Virginia topped Texas Tech for the 2019 national title in Minneapolis, sees Lawson going No. 48 overall — with the 18th pick of the second round — to San Antonio.

And those assessments have been fairly consistent throughout the 2018-19 season, with Lawson moving up or down just a few spots but staying mostly in the 40-50 range for the past several months.

The goal of every NBA draft hopeful is to wind up in the land of guaranteed money known as the first round, where the first three years of your rookie contract are set in stone and outline exactly how many millions you’ll make to jumpstart your pro career.

Lawson’s hopes are certainly along those lines. But after spending four years in college — three on the court — and with his 22nd birthday arriving in October, Lawson is pairing his confidence in his own ability with a much more mature mindset to the start of his NBA journey.

“I think I can definitely get into the first round if I just do well at the combine,” Lawson told the Journal-World. “But it’s not all about being in the first round. It’s about having the best fit for your game. So finding the team that loves me and has faith in me and is going to develop me, that’s my goal in the whole thing.”

To that end, Lawson will spend the next four or five weeks in Los Angeles working on getting stronger and developing a more consistent NBA 3-point shot while also fine-tuning his conditioning and all-around game.

What he likes most about his current position is not the chip on his shoulder or the me-against-the-world mentality. Lawson’s too friendly and happy of a guy to let those things dominate his thoughts.

Instead, he said he was driven by the evaluations his camp heard from people plugged into the NBA scene. And he believes the best part is the fact that improving his perceived weaknesses is now totally in his hands.

“I was getting some good feedback and hearing some things I needed to work on,” Lawson said. “I felt like all of the things that they said were things I could control and I’m just ready to work on those things. … People are definitely going to see that I’m better than what they’ve got me projected.”

Dedric is a tough NBA draft prediction. He's got a lot of the same game as the Morris twins. They've done OK.

There's a basketball adage that you are the position that you can guard. Can Dedric guard an NBA Small Forward? That seems dicey. A PF? More realistic.

The difference being that the Morris twins were BOTH far more athletic, and had a bit of a chip on their shoulder that sometimes was a negative, but more often than not, allowed them to play with a certain amount of fire.

As you'll recall, Marcus (the more prolific of the two while at Kansas) had some questions about his size and had the dreaded "tweener" label. Markieff ended up surprisingly being the better NBA player, but Marcus has also settled in nicely as a very serviceable 3...he was able to refine his game and establish a defined position for himself at the NBA level (no longer a tweener).

Dedric is most certainly never going to have the explosiveness or athleticism to play 3 in the NBA, and is undersized for the 4 position.

He's an EXCELLENT college player. I just don't see his game translating to the NBA.

Agree that they're both more athletic. Their career stats are shockingly similar. Marcus is $13M behind in career $$.

both players have had good success in their NBA careers, Markieff got an earlier start with Phoenix while it took Marcus a while to find a team that needed him.

Now Marcus has found an important role on a very good team and is definitely in better position that Markieff. Markieff had a good run with Washington, but is currently trying to fill a role in OKC as a reserve and a stretch 4. Marcus since leaving Phoenix has probably had a slightly better career.

Not only that, the Morrii are also more physical and stronger.

Dedric will end up playing in overseas. Nothing wrong with that - one can make a lot of Euros playing there.

Dedric is just a really, really solid basketball player. Nothing flashy. He'll catch on somewhere and find a role for a decent career.

But, as others have mentioned, it's so hard to project what kind of career someone is going to have. I mean who would have thought Thomas Robinson would be playing in the G-League right now?

The one area that I think another year would help Dedric is with conditioning and strength. He's close to potential but without similar improvements, he's experienced in the KU program, he's doing to draft very late if at all.