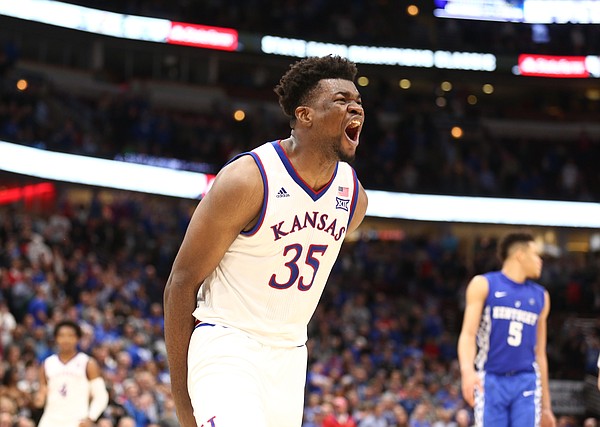 Kansas center Udoka Azubuike (35) roars after a foul by Kentucky late in the second half on Tuesday, Nov. 14, 2017 at United Center. by Nick Krug

Next up: Sophomore center Udoka Azubuike:

Operating for a large part of the season as KU's only true big man, Azubuike's role and importance on KU's 2017-18 squad was only eclipsed by that held by senior point guard Devonte' Graham.

Unlike Graham, who simply could not come off the floor on most nights, Azubuike spent a fair amount of time on the bench this season, be it because of foul issues or needing a breather. That kept his numbers down a tad and limited his minutes to 23 a game.

Still, in those 23 minutes, few players in the country had the kind of impact in that short amount of time as Azubuike did for Kansas. When he was on the floor, the Jayhawks were almost a completely different team and his size, strength and power on both offense and defense proved to be huge assets for the Jayhawks.

Azubuike, who led the nation in field goal percentage at 77 percent, finished the season with averages of 13 points and seven rebounds per game. He also was the team leader in blocked shots (60) and became a phenomenon unto himself for his up-and-down exploits at the free throw line.

He Will: Break a rim this season – It never happened and I have to admit, I am kind of surprised. As pointed out in the original “He Will, He Won't, He Might” entry, I did not expect Azubuike to shatter the glass or rip the rim clean off of the backboard. But I did envision a scenario in which the brut force of his dunks would rattle the rim so hard that it would slip out of place a quarter or an inch or two and have to be addressed by whatever arena's facilities people. Same could have gone for the support structure behind the basket. But neither were compromised during the 2017-18 season, perhaps because Azubuike learned his lesson and adjusted a little after Italy and perhaps because of the quality of the goals used in college basketball these days. Either way, it was not for lack of trying. Azubuike finished with nearly 120 dunks on the season and got his money's worth on just about every one.

He Won't: Be in the conversation for all-Big 12 honors unless he develops better post moves – While this sort of held true in the sense that Azubuike did not land on the first or second all-Big 12 squads at season's end, he did pick up a third-team nod and, at times, was as dominant a player as there was in the conference. A factor that opposing coaches had to account for every night, it was Azubuike's inconsistency and not necessarily his limited and still-developing post moves that dropped him down a couple of notches. Of course, the fact that the league was as good as it has been in a long time, with serious talent on just about every squad, didn't help him any.

He Might: Be known as much for constant foul trouble as his monster dunks – I'd say this is a fair claim. Those 120 dunks were pretty remarkable, but it seemed to make like KU fans — along with the KU coaching staff — spent more time worrying about Azubuike's fouls than they did celebrating his vicious dunks. The sophomore center, who played in 36 of 39 games and 848 minutes, committed 108 fouls during that time. He finished with four or more fouls 11 times and often picked up those silly fouls that seemed completely unnecessary and drove Self crazy. He has a lot of room to grow still and will have no shortage of things to work on this offseason. But finding a way to keep himself from committing those types of fouls will be just about as important as anything he works on.

My overall prediction grade for this one: 2 out of 3.

• The Road to Recovery: Inside KU center Udoka Azubuike’s journey back to full health

• Back to where it all began, when Azubuike almost ripped down an Italian goal during KU's exhibition tour overseas in August

Coach commented around the time that Silvio became a viable option that the biggest benefit might be allowing Dok to get a breather before picking up the resultant silly fouls. Expecting him to be back with better conditioning and backups next year.

The kid is pretty unskilled. He has a lot to learn about basic basketball before he heads off for a paycheck.

Do you actually watch any games?

Dok got better but all he has is dunking and a running hook..he wont bully guys in the NBA like he did at KU..he will need to develop more post moves and maybe add a 10 ft jump shot..dont get me wrong, he has skills and improved greatly