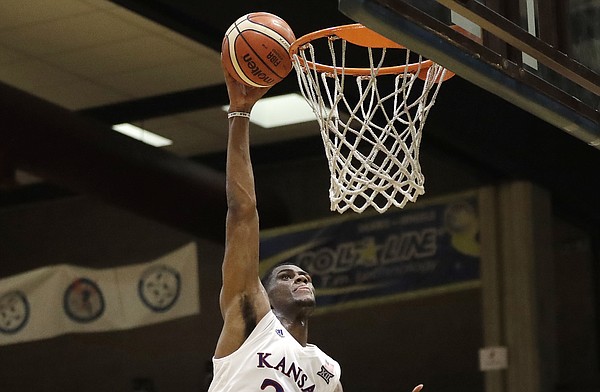 Kansas forward Billy Preston scores during an exhibition game between KU and an Italian selection of players, in Seregno, near Milan, Italy, Saturday, Aug. 5, 2017.

It’s not in any way Billy Preston’s fault.

The Kansas freshman was not the man who labeled himself a five-star player. He did not place himself in the Top 10 of most recruiting rankings. And he did not award himself a spot on the McDonald’s All-American or Jordan Brand All-Star rosters.

All he did was grow to be 6-foot-10, 240 pounds, with a freakish frame, incredible athleticism and skills that few men his size possess.

So, yeah, when the college basketball world sees a player like Preston, the hype and expectations are going to be through the roof for what he can do or should be.

People, whether they want to admit it or not, already are expecting and hoping for Preston to be KU’s next great one-and-done player. And he might end up being just that.

But as of today, he’s just another player on a good team that’s trying to put it all together in time for the start of the 2017-18 season, which is now just three weeks away.

Remembering that will go a long way toward allowing fans to enjoy the Billy Preston experience at Kansas and here’s a quick look at what to expect, whether the upcoming season is Preston’s lone season at KU or not.

This isn’t a knock — far from it. It’s just that when someone is gifted with a frame and the kind of physical tools that Preston possesses, they’re going to encounter situations where their coaches have high expectations and always want to see them play up to their ceilings.

That’s tough for any player to do consistently. But it’s even tougher to ask that of a true freshman getting his first taste of big time college basketball.

I don’t think the KU coaches will ask too much of Preston. But I do think they’ll expect him to at least be a factor inside and also will constantly be waiting for that moment when it all clicks and the five-star forward transitions from understudy to monster.

If such a moment happens for Preston, it will go a long way toward making the Jayhawks one of the top NCAA title contenders in the country. Who knows whether it will. But you can count on their being some frustrating games and practices while we wait to find out the answer.

He Won’t: Stop working to try and improve.

We haven’t seen a ton of Preston yet, but what we have seen has looked an awful lot like a young man who wants to learn as much as possible while he’s in college.

What Preston lacks in terms of giving all-out effort and intensity when he’s on the floor, he makes up for behind the scenes, where he constantly seems to be working to understand and utilize the lessons being thrown at him by the Kansas coaching staff and KU’s upperclassmen.

Going as far as to call him a sponge might be a step too far, but it’s clear that he has that insatiable desire to learn and improve his game.

The big question for Preston will be if he can improve to the point where his effort and intensity are consistent enough to match his desire to be great.

Doing so will require him to ditch his old habits, get out of his comfort zone and play with the kind of tenacity that Josh Jackson showed throughout his lone season as a Jayhawk. That's not to say Preston should try to be — or even could try to be — Jackson, but he absolutely could play with the same kind of fire that Jackson brought to the floor for every possession on both ends of the court. He just needs to change his mindset, listen to his coaches and convince himself that substance matters more than style.

He Might: Figure it all out by Big 12 play and be the X Factor for this KU team.

No matter who they are or what their status, freshmen typically need time to adjust to the college game. And Preston will be no different.

Even though KU’s non-conference schedule features a lot of home games against low-profile teams from smaller conferences, many of those teams feature veterans who have played a lot of college basketball and have matured, both mentally and physically, to the point of being able to hang with even the most talented freshmen in the college game.

So while one might think that a player of Preston’s pedigree should dominate teams like Tennessee State and Toledo and Texas Southern, that’s not always the way it goes. In fact, it rarely happens that way.

Those games do, however, provide a good opportunity for freshmen like Preston to learn and grown, make mistakes and get better, all with the goal being to have things figured out well enough by January to jump into Big 12 Conference play with a better understanding of what it takes to compete at this level and play at Kansas.

The biggest key here is consistency and progress. If Preston can get a little bit better each day and each week and avoid taking steps backwards or hitting major roadblocks, the coaching he gets and teammates he’s playing with will get him to the point where he can be a factor for this team when conference play begins (Dec. 29 at Texas) and the Jayhawks fire up their run for a record 14th consecutive Big 12 title.

Few teams Kansas faces will have a player who can match up with Preston's combination of size, skill and athleticism. And if he reaches the point where he is able and willing to exploit that by playing on the perimeter when it's warranted and doing work inside when it's needed, the freshman could play a huge role in just how far this team can go this season.

I haven't seen him play, but from everything I've read, I don't see him being one and done. It sounds like, even though he's 6'10" and 240, he doesn't want to bang near the basket. And he doesn't have the shot or driving ability to play away from the basket. And not much of a motor. I agree that we - and he - may need to temper our expectations, and hope this is a learning year, and that he'll be a beast as a sophomore.

Based solely on highlight vids, I think he has the shot and handles to play away from the basket in the NBA someday, but that's not where WE need him to be.

He certainly has the skill to play inside or outside. It's just a matter of getting him willing to play where KU needs him to play, not just hang out with the guards outside the arc all the time.