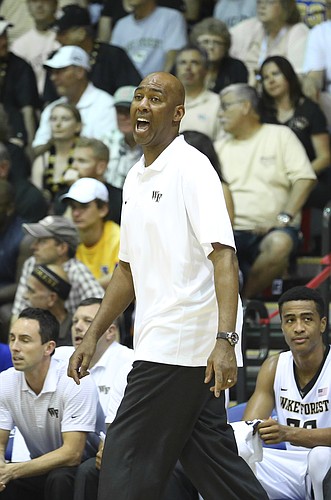 Wake Forest head coach Danny Manning yells at his defense during the first half, Tuesday, Nov. 24, 2015 at Lahaina Civic Center in Lahaina, Hawaii. by Nick Krug

Over the weekend, Wake Forest athletic director Ron Wellman announced that the school had signed men's basketball coach Danny Manning to a six-year contract extension that will take him through the 2024-25 season.

The news, while terrific for Manning, the former KU assistant and one of the all-time great players in Kansas history, also brings with it some interesting timing.

Considering that KU coach Bill Self, earlier this fall, told ESPN's Myron Medcalf that he definitely would like to coach through the end of his contract, which has five years left on it and will take him to age 59, but never planned on coaching much past his late 50s, you can't help but wonder if Manning, by then, might be ready to return to Lawrence to succeed Self if he were to leave.

A lot has to happen between now and then for Manning to follow that path, of course, including Manning actually wanting the job if it comes open. But there's no doubt that continued success at Wake Forest during the next several years would only solidify Manning's candidacy as Self's replacement, should he be interested in a return to KU.

Manning, now in his fourth season at Wake Forest after a successful stint at Tulsa, led the Demon Deacons to the 2017 NCAA Tournament. Under his leadership, Wake Forest also has recruited a top 10 class for 2018 and has signed four Top 100 players in the past two recruiting classes.

According to the news release announcing the extension, "Manning has shown the ability to develop young talent as evidenced by sophomore John Collins, a first team All-ACC pick last year, who was a first-round selection of the Atlanta Hawks in the 2017 NBA Draft. Rising senior forward Dinos Mitouglou signed with Panathinaikos over the summer, one of the top European club teams."

“Danny is attracting highly-rated and quality young men to our program and he has proven his ability to develop that talent,” said Wellman. “Our program will continue to improve and we will realize the lofty goals that we have for the program​.”

Danny Manning was an extraordinary player at Kansas, obviously, and I appreciate what he did for the program in the 1980s as a player in leading us to two Final Fours and the '88 title. He was also an extraordinary assistant coach for Bill Self, and I appreciate the role he played in developing our big men and in getting Kansas to two Final Fours and the '08 title.

However, I'm not sure I'd want him as our head coach when Bill Self leaves. He hasn't exactly lit it up at Wake Forest, and his coaching record is under .500. And all too often, former great players who come back to their schools to coach don't do very well - think Walt Hazzard at UCLA or Matt Doherty at North Carolina. Guys like Fred Hoiberg who play and coach at the same school are the exception. I don't want to see Danny come back to coach at Kansas and fail and see his KU legacy forever tarnished.

Bryce, you bring up legitimate comments. However, Danny's KU legacy is set in stone, regardless of his coaching record.

One can only hope that Self will want to coach into his 60's and beyond and set additional records worthy of a statue in front of Allen Fieldhouse. Many have seen success in their 60's and 70's, e.g., coach K, Old Roy, Izzo, and others. The pain, grind, and challenges of recruiting 16, 17, 18 year old kids in this current environment will likely be the deciding factor.

I get it - after Self's record-breaking tenure, Manning would be the safe choice to do 7-10 years.

The best younger coach out there is Brad Stevens (Butler, Celtics) - though he doesn't have a KU connection, I'd hope KU would go after him.

Manning would be the safe choice, yes; but would he be the right choice? Based on his track record at Wake Forest, I don't think so.

Brad Stevens is doing pretty well (for himself) with the Boston Celtics. However, things can certainly change (by the time that Coach Self's current contract expires).

There is probably no other name associated with KU Basketball that is as loved as Danny Manning. He was the hero when I was going to school many, many (too many) years ago)

Bryce summed it up wonderfully above and I agree with everything he said. Some day, Coach Self will step down. It will happen. When that time comes, the next head coach will have to be a star.

Look at one VERY appropriate correlation.....Matt Doherty. Matt was an excellent assistant coach here at Kansas. He was a player at North Carolina. When the time came for a new head coach at NC, they wanted Roy Williams and Roy talked them into hiring Doherty. It was a feel good hire. Bring back a great player with some decent coaching experience. He went to North Carolina and his record was less than stellar and got bounced from the program.

Let's not do the same with Danny Manning.

Adding.....When that time DOES come to bring in a new head coach, there are only a very small handful of coaches that wouldn't want the job. Kentucky, North Carolina and Duke have similar (but still inferior) prestige. Aside from the coach at those three schools we will have our pick of head coaches. They will be sending us their resumes unsolicited. Let's not assume we have to narrow our choice to a coach with direct ties to the school. We will want the absolute best and we will have the ability to get them.

Danny's not much younger than Self. He was a senior in '88, so he was born in approximately '67. His current contract takes him through 2025. According to my rudimentary arithmetic, that would make him 58. He might be ready to retire by then.

Titus, I've said the same thing. Coach Manning is only a few years younger than HCBS, so even if he's not quite ready to retire he would be soon after. We wouldn't have him for long in either event, and this isn't the football team: we want coaches who will last 10-15 years at least.