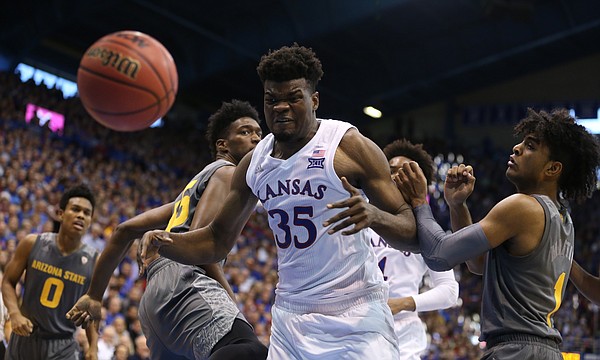 Kansas center Udoka Azubuike (35) loses the ball out of bounds during the second half, Sunday, Dec. 10, 2017 at Allen Fieldhouse. by Nick Krug

A few random thoughts about the Kansas men's basketball team as it navigates its way through finals week and a two-game losing streak.

• A lot of the talk during the past couple of days has been about how miserable practice might be for this Kansas team this week. And while that might be true in many ways, it's not exactly as if KU coach Bill Self can run these guys ragged.

Remember, they're still just seven deep — six while Malik Newman recovers from the concussion he suffered during Sunday's loss — and Self twice on Sunday mentioned second-half fatigue as a potential reason for the Jayhawks' defensive struggles.

The intensity will be up. Expectations will be elevated. And Self will almost certainly be more demanding of the Jayhawks in practice this week. But the idea that he's just going to run them until they drop does not seem entirely possible.

• Early on, freshman Marcus Garrett looked poised beyond his years and got his freshman season off to a terrific start. However, in the past three contests — all against more talented, Power 5 opponents — Garrett has looked like a different player and his confidence seems to be down considerably.

In three games against Syracuse, Washington and Arizona State, Garrett played his three lowest minute totals of the season (8, 15 and 15) and made just one shot in that time while recording just eight rebounds.

The Dallas freshman had more rebounds than that combined total in two single games earlier this season. What's more, he committed three fouls in each of those games, a statistic that suggests the game might be speeding up a little for him right now. 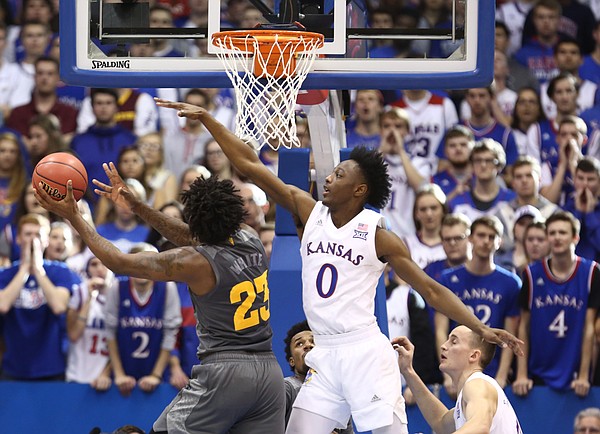 Arizona State forward Romello White (23) gets a shot after a foul from Kansas guard Marcus Garrett (0) during the second half, Sunday, Dec. 10, 2017 at Allen Fieldhouse. by Nick Krug

• On Monday night, KU assistant coach Norm Roberts suggested that newly eligible guard Sam Cunliffe — 6-foot-6, 200 pounds — might most be able to help the Jayhawks on the offensive glass. That would be a much welcomed contribution considering Kansas has not done much in that area during the past three games.

In fact, just 22 percent of KU's total rebounds during its three most recent games have come on the offensive end, with big men Udoka Azubuike (6) and Mitch Lightfoot (4) leading the team in that category during this recent stretch.

Considering KU pretty much plays just one of those guys at a time, the performance of the KU guards on the offensive glass has been somewhat of a let down and needs to improve. Cunliffe, an outstanding athlete with terrific leaping ability, could help in that department, but only if he logs enough minutes.

The easiest fix for this issue continues to rest with Lagerald Vick and Svi Mykhailiuk doing a better job of hitting the offensive glass. In the past three games, the two veteran wings have just eight combined offensive rebounds.

• Speaking of Vick, he seems to be on the cusp of really taking that next step. Granted, the entire Washington game plan was designed to give Vick easy buckets, but in his past three games alone the KU junior is averaging 24.3 points, 6.7 rebounds and 5.3 assists while shooting 56.4 percent from the floor and topping 20 points each time out.

Vick is now leading the Jayhawks in scoring, at 18.7 points per game, shooting 45 percent from 3-point range and 56 percent overall and also ranks second on the team in rebounds, just six behind Azubuike.

It's not just the numbers that look impressive. Vick really appears to be more confident than ever out there, and, offensively, seems to be in constant attack mode, looking for any way possible to put pressure on opposing defenses.

If he can translate that approach to offensive rebounding and defense, Vick, no doubt, will be one of the best players in the Big 12. 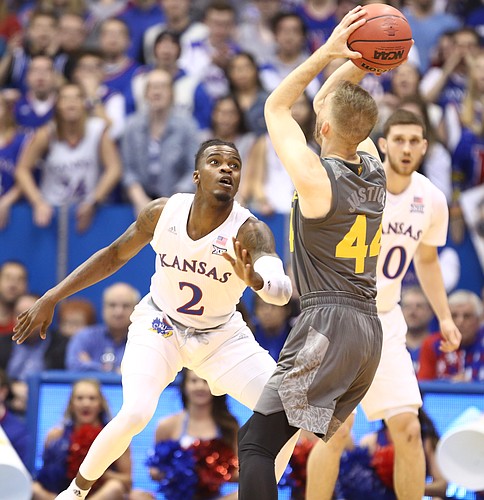 • Roberts on Monday night brought up one other key area that he thought the Jayhawks had fallen short in during recent outings — intangibles.

While Garrett seems to be the best option to become this team's Mr. Intangible — given the fact that his role in the offense is not nearly the same as others — Roberts pointed out that positive contributions in the area of intangibles can come from anyone and should come from everyone.

A hustle play here, a blocked shot there, a charge taken one moment and stealing an extra possession the next. Those are all examples of the types of plays Roberts says this team needs more of, and he pointed to past Jayhawks Josh Jackson, Travis Releford and Jamari Traylor as some of the best intangible guys this program has had in recent years.

• Finally, in case you missed it, here's a quote from Josh Jackson, who was asked back in Phoenix this week about Arizona State walking into Allen Fieldhouse and knocking off his Jayhawks.

After telling AZ Central, "Good for Arizona State. They got a good win. But it'll never happen again," Jackson said he would bet that KU goes farther than the Sun Devils in this year's NCAA Tournament and added, "I'm putting myself out there. I think I'm safe on that one."

All confidence aside, Jackson admitted that he was perplexed by what his former teammates have done — or not done — during the past two outings.

"I don't know what's going on with my team right now," Jackson said. "One thing I do know is I'd hate to be them right now. I definitely don't want to be playing for Kansas basketball right now because I know Bill (Self) is not happy."

The old story you can lead a horse to water but you can't make him drink. Coach can try different attacks (he might even try the crappy zone defense) but in the end the players have to carry out the plans. Maybe the pre- season rating were too high or maybe we will see huge improvement. Lets not hope the last 2 games are telling us what to expect. Will additional players help. Lets hope we get additional players.

You may be tracking this ESPN list of top 100 NBA prospects already. I think many of your readers would like updates as they become available during the remainder of this season. The most recent updated 100 includes: 37 players between 6-9 and 7-2 [the BIGS]; 18 native Europeans not playing in NCAA; and, 3 "freshman level" guys who are effectively not playing at all. KU has Devonte at #45, Lagerald at #54 and Svi at #55. But no Dok, Billy or Malik, our McDonald's All Americas. In the top 40, there's Duke[4], Kentucky[4], Mich. St.[2], Miami[2] and USC[2]. This view by potential NBA talent evaluators can be a guidepost for thoughtful KU fans throughout the rest of this season.

Maybe that means Dok and or Billy could come back next season and add to an already stacked front court?? though I think with how things have gone for Preston so far, he might leave and take his chances in the draft or transfer out for a fresh start like Bragg did..Im still hoping we see Preston play for KU..maybe in the second half of the season???

If either of those guys plays college ball next year, logic says its at KU. Neither one wants to lose another year due to transfer. This Preston situation is the most secret, "secret" in America. How do we get Trump to intercede as he did for those UCLA international felons? At least the whole Jayhawk nation would thank him publicly!

Cool to see Josh Jackson still showin up hard for KU. Once a Jayhawk...man we def miss that guys.