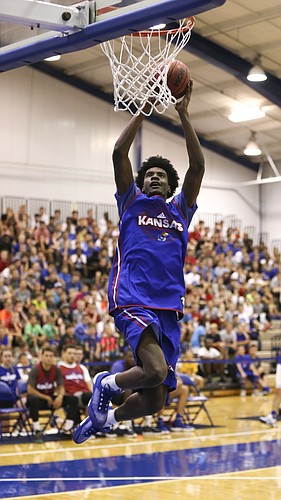 Blue Team guard Josh Jackson soars in for a dunk during the Bill Self basketball camp alumni scrimmage, Wednesday, June 8, 2016 at the Horejsi Athletic Center. by Nick Krug

As if the excitement and expectation surrounding Kansas freshman Josh Jackson was not already large enough, now we get this.

Rob Dauster, of NBC Sports, on Wednesday released his preseason All-American college basketball teams. And there on the first team, along with a couple of veterans and a couple of fellow underclassmen, was KU's Josh Jackson.

It's no surprise that the 6-foot-8 freshman from Detroit by way of Prolific Prep in Napa, California, is getting some serious love heading into the 2016-17 season. Jackson has been projected as one of the top 3-5 picks in the 2017 NBA Draft for more than a year and also has earned several preseason all-Big 12 and Big 12 player of the year nods, as well.

It's going to take more than that for Jackson to earn first-team All-American honors, but there definitely is more available. Not only did the Jayhawks lose Selden from last year's 33-5 team, they also lost leading scorer Perry Ellis and his 1,150 minutes, 16.9 points and 5.8 rebounds per game.

Sophomore big man Carlton Bragg certainly will be projected to pick up a lot of Ellis' load, but some of it figures to be there for Jackson, as well. And some of it — most notably the scoring and rebounding — fits right into Jackson's biggest strengths.

Selden and Ellis averaged right at 30 points per game last season and it seems safe to assume that Jackson and Bragg will average at least that this season. If Bragg can become one of those classic Bill Self 10-12 points per game scorers that would leave the rest of Ellis' numbers and all of Selden's for Jackson to pick up.

It's definitely possible that Frank Mason, Devonte' Graham and even Landen Lucas and Sviatoslav Mykhailiuk could cut into some of that. But Jackson will get the best opportunity to do so and it's also possible that this year's team could score slightly more than last year's squad, which averaged 81.3 points per game.

If Jackson grabs all of Selden's production, some of Ellis' and helps the Jayhawks score even just a few points per game more this season, it's definitely easy to envision the one-and-done freshman reaching, if not topping, Andrew Wiggins' 17.1 points per game average from the 2013-14 season and conceivable to see him becoming the first KU player since Sherron Collins (18.8) in 2008-09 to average more than 18 points per game in a single season.

Here's a look at what Dauster had to say about Jackson:

Josh Jackson, Kansas: Jackson was ranked the No. 1 prospect in the Class of 2016 by a number of outlets, and there are still people that believe he’ll eventually be the best NBA player out of this group. A freak athlete like Andrew Wiggins, Jackson is a bit more polished and a whole lot tougher than Wiggins was a freshman. It’s not crazy to think that he can match Wiggins’ output (17.7 points, 5.9 boards, nation’s top perimeter defender), and considering Kansas is a preseason top five team, that puts him firmly in the All-America discussion. But here’s what will limit him: If Carlton Bragg makes the improvement many expect him to, Jackson’s offense may be cut into, and considering there are a pair of alpha-dogs that will be the guys called on to make big shots in key moments, it’s hard to see him having any “Wooden Moments”.

Wow! I did not realize that Perry Ellis averaged 1,150 minutes a game last year. No wonder he looked so old by the time he finished his KU career... : P