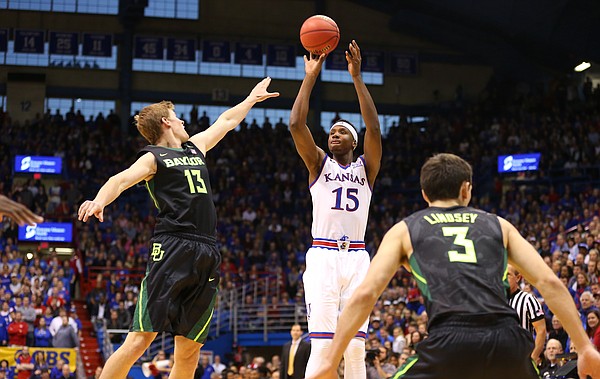 Kansas forward Carlton Bragg Jr. (15) puts up a three against Baylor forward John Heard (13) during the second half, Saturday, Jan. 2, 2016 at Allen Fieldhouse. by Nick Krug

It's time to move on to the fourth entry in our He Will, He Won't, He Might series that examines the upcoming season for the Kansas men's basketball team, and today we take a closer look at a fourth Jayhawk projected to be in this year's starting lineup — sophomore Carlton Bragg.

As you've surely read or heard, Bragg spent the offseason adding serious bulk to his frame. He's up and inch from last year's height and has added nearly 30 pounds to his body, which is absolutely noticeable when you look at him.

Bragg says that neither addition has had a negative impact on his athleticism or the way he plays the game and both should allow him to have more success when he's forced to hang out close to the rim and compete for buckets and rebounds with the other big bodies in college basketball.

Many college basketball analysts and prognosticators have Bragg on the short list of players at big time programs who could be in for a monster year and it's the young man's skill set along with the opportunity that's now in front of him that has so many people predicting big things for Bragg.

With that said, let's take a quick look at what we should expect from Bragg during the 2016-17 season.

In case you missed the first three entries in the series, here's where you can find them.

Now, on to Carlton Bragg...

He will: Rebound and block shots better than Perry Ellis

So much of the talk this offseason regarding Bragg was how he was slated to slide into the role created by the departure of Perry Ellis and pick up where the three-year starter and No. 8 all-time scorer in Kansas history left off. And while that certainly is a worthy if not ambitious goal for the sophomore from Cleveland, there are at least a couple of areas where Bragg figures to fare better than Ellis ever dreamed.

The two biggest are rebounds and blocks. It’s no secret that KU coach Bill Self always wanted more from Ellis in the rebounding department. He should get it from Bragg. A season ago, Ellis finished with 222 rebounds in 1,150 minutes, good for a respectable average of 5.8 rebounds per game. Bragg, in just 338 minutes finished with 94 rebounds.

Those two stats alone should help this year’s group become a better defensive team than the 2015-16 squad and the suddenly bulkier Bragg figures to be a big reason for it.

He won’t: Be the scorer Perry Ellis was.

Having said all of that in the “He Will” section of this entry, it’s still hard to see Bragg being the same consistent scorer that Ellis was. For one, he’s nowhere near as gifted and as versatile as Ellis was by his senior season. A year ago, Ellis was a threat everywhere on the offensive half of the floor, able to catch and shoot, knock down three-pointers, drive to the rim to get his own buckets or operate in the high post to pick up points in the paint.

Bragg, though gifted and ever improving, still has a long way to go before he’s on that level. And the one trait he’s lacking that might hurt him the most in his quest to replace Ellis is assertiveness. Although Jayhawk fans constantly begged for Ellis to get tough and dunk the ball, the guy was a force of nature on the offensive end when he made up his mind that he was going to attack and no one was going to stop him.

Bragg has yet to show that type of drive and killer instinct. That’s not to say it’s not in there. But to expect it to be in Year 2 what Ellis’ was in Year 4 is a bit of a stretch.

He might: Leave KU to become a lottery pick

Earlier this summer I reached out to Jonathon Givony of DraftExpress.com to inquire about why Bragg was nowhere to be found on the site’s 2017 NBA Mock Draft. Givony said he didn’t think Bragg was quite there yet but that he certainly could — and likely would — be added to the first round if he got off to a hot start.

Such is the beauty of mock drafts, which can and do change often throughout the course of the year and can quickly make up for a mistake or an oversight in the next update. I’d expect that to happen with Bragg and DraftExpress.

At 6-10, 245 pounds, Bragg is just starting to come into his own size wise. Add to that solid frame the fact that he moves and shoots it well enough to be considered a legit offensive weapon in the NBA and it’s easy to see how Bragg could bolt KU after his second year for his shot at professional basketball. It’s possible, of course, that Bragg could decide to leave and not be picked in the lottery, even if he is a first-round pick and, therefore, gets guaranteed money.

The guess here, though, is that if Bragg goes — a likely scenario according to those who know him best — it’ll be because he’s projected to be one of the first 14 picks in the June draft. 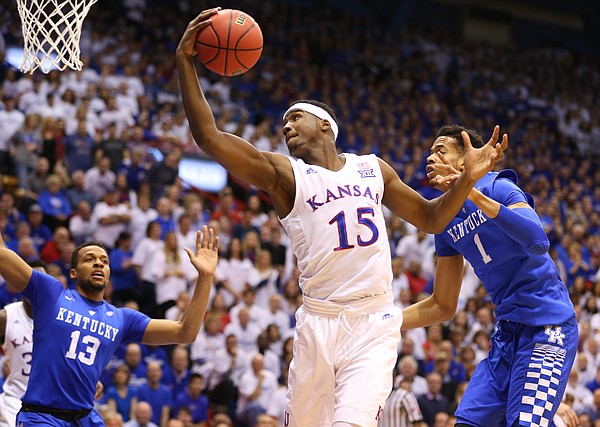 Bragg has a better release than Ellis. He could very well be a better and more complete player by March.

I think that is possible also. How many times last year did we see a shot from Bragg hit the back of the rim or in a similar fashion and still go in? A lot. I hope he has been working on his trey ball. While we don't need it necessarily, Perry's outside shot gave team's fits last year, which would really help us again this year.

Bragg looked to have a decent stroke from 3 last year, though his attempts were limited. Josh Jackson on the other hand is known as a streaky outside shooter. So I'd like to see Bragg float to the outside often and pull his man out to make room for JJ to fly hard to the rack. Can't wait to watch these guys ball this year!!!

I know it was just a scrimmage (and guys were wanting to make the big shots in front of a packed AFH), but Carlton's 3pt shot looked NICE on Saturday night....Hopefully he is consistent enough to play around the arch and knock down a few three's here and there. Definitely going to be an exciting year! RCJH

Matt, your won't and might have me confused. If he won't be the scorer that Ellis was, how is it he might be a lottery pick, when Ellis didn't even get drafted and barely made an NBA roster? Those two statements just ring with contradiction to me.

My guess is if he's not the scorer Ellis was, he's not a first round draft pick. Bragg is younger and has more opportunity for improvement than Ellis had after last season, and I can see how that would effect his draft prospects, but still, I think he's going to have to score to be a first round pick.

Ellis didn't get drafted because of his size (too small to play the 4, too slow to play/guard the 3). Having short arms and small hands only makes his height more of an issue. His age also becomes a negative in the minds of NBA scouts. So he's going to have to prove himself the hard way (on the floor) if he's going to make an NBA roster.

Bragg doesn't have any of those issues. He's taller, has longer arms, has bigger hands, and he's younger (which to NBA scouts means a higher ceiling).

Getting drafted has very little to do with whether you can make buckets or not. Anthony Davis was not a scorer in College.