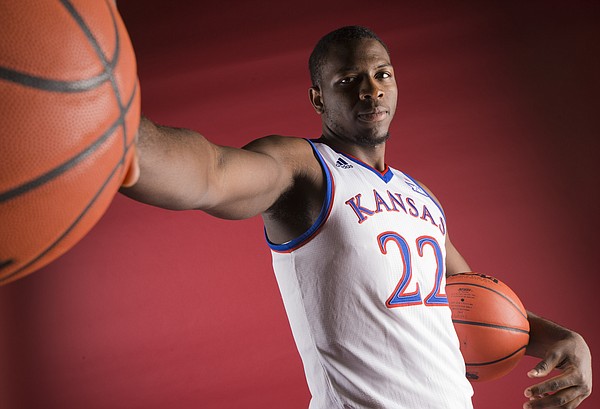 After a little bit of a break in the series to cover media day and a few other newsy KU basketball things, we're back for a quick look at our second bench player of the series, big man Dwight Coleby.

The former Ole Miss transfer who came to Kansas prior to the 2015-16 season sat out last season in accordance with NCAA transfer rules and caught a bad break along the way, tearing his ACL early in the season.

Although the injury did nothing to limit Coleby's playing time on the floor, it did put him a step behind in the process of learning the Kansas system. He had the luxury of watching film and practice and sitting on the bench during games. And those advantages likely only helped his transition. But there's no substitute for being able to play the game, even if it is as a scout team guy against KU's starters in practice.

Because he never got that opportunity and has not played in a game since the end of the 2014-15 season, Coleby's confidence took a hit and he's currently in the process of regaining it both in his game and in his knee.

KU coach Bill Self said in late August that Coleby was fully cleared by doctors and hinted that he would like to see Coleby make some progress sooner rather than later if he hopes to be a relevant part of this year's team.

In case you missed the earlier installments of this series, follow the links below:

Now, back to what to expect from Coleby...

He will: Earn minutes if he can rebound

If there’s one glaring question about this Kansas team, it’s what happens to the Jayhawks against big teams or if Landen Lucas gets in foul trouble?

We know that Udoka Azubuike is a monster and, if he develops at the rate the coaches would like, he will go a long way toward answering that question. But he’s still just a freshman and a very young freshman at that.

That’s where Coleby enters the picture. At 6-foot-9, 240 pounds, Coleby has the necessary size to be a factor on the glass if the Jayhawks need him to. And whether or not they need him to depends (among other things) on whether or not he proves he can get the job done.

If Coleby approaches this season with the mindset that he’s an all-around player who wants to look to score as much as he plays defense and rebounds, he could be in trouble. But if he approaches the season with the mindset that he’s going to specialize in rebounding and play a sort of hybrid role of what Kevin Young and Tarik Black did during their time as Jayhawks, he could find himself filling a nice role for this talented team.

He won’t: Be a guy the Jayhawks count on for offense

Along those same lines, the Jayhawks need Coleby to realize that it’s unlikely that Self and company are going to draw up scoring plays for him. There’s a chance, if he plays within the flow of the offense and keeps from trying to force things or do too much, he could find his way into some open looks and knock down a baseline jumper from time to time or score on the offensive glass.

Beyond that, though, Coleby figures to be the fifth offensive option on the floor at all times, provided we’re not talking about garbage time here. It’s unlikely that Coleby will play next to Lucas very often, but even if he does, Lucas has shown an ability to operate in the post and appears to have improved his offensive game at least a little in the offseason.

Coleby’s numbers at Ole Miss were modest — 4.1 points and 3.5 rebounds per game in two seasons — and he would do well to keep that point total right where it is and focus on trying to double the rebounding mark.

In discussing this year’s likely rotation, Self has said that Frank Mason, Devonte’ Graham, Josh Jackson, Carlton Bragg and Landen Lucas are all but locked in as starters. After that it’s Sviatoslav Mykhailiuk and Lagerald Vick as the perimeter players off the bench and Azubuike as the first big.

That leaves Coleby in a battle with true freshman Mitch Lightfoot for the No. 2 big man off the bench spot and ninth player in the rotation.

Because Self doesn’t like to play 10 players — and would probably prefer to avoid playing nine if the circumstances allow for it — Coleby will have to prove that he (a) is fully recovered from the ACL injury he suffered a season ago (both mentally and physically) and (b) can offer more to the lineup than Lightfoot, who is not as big or experienced as the Bahamas native but is more explosive and has not showed any lack of confidence since stepping on campus.

Most years it seems there’s an odd-man-out in the Kansas rotation. Some years it even has been some guys who went on to become terrific players (think Jeff Withey or even Thomas Robinson). It’s never anything personal and always a matter of making the numbers — and, more importantly, the chemistry — work.

Coleby has his work cut out for him to be a factor on this year’s team, but there’s no doubt that he will get a fair shot.

Rebounding will be the big question for this team. Lots of ball handling, shooting, and even D. The big question is will we be getting those missed shots on D and O.