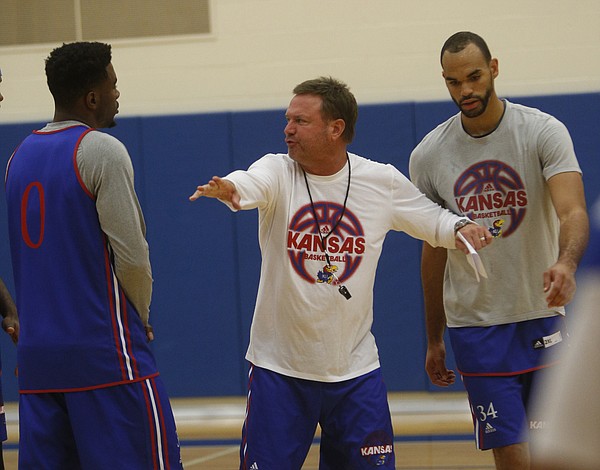 Kansas coach Bill Self, center, runs through a play with Jamari Traylor, left, and Perry Ellis. by Richard Gwin

They banged into walls, tangled for loose balls and committed fouls without the whistle blowing to stop the action.

There is no denying the insane amount of depth and talent on the 2015-16 Kansas University men's basketball team. A legit argument could be made that KU's second five could finish in the top half of the Big 12 Conference, while the first five — which, at this point, we presume to be Frank Mason, Devonte' Graham, Wayne Selden, Perry Ellis and, at least to start the season, Jamari Traylor — works toward winning a 12th consecutive conference title.

But there's one thing about this year's team that might be a getting overlooked. Sure, you've heard, written and read about the skills, returning experience and chip-on-their-shoulder mindset this team possesses. But for the first time in a long time, this year's squad seems to have a little more physicality behind it.

That was obvious during a recent practice, when guys not only looked bigger and badder, but also played like it. And that's the beauty of these practices. Bumps and shoves that almost certainly would get called during games are ignored completely. You either handle it and execute anyway or get exposed and lose reps because of it.

Whether the gains made from the physical practices — where teammates even have been known to get under each other's skin a little from time to time — carry over to game days and show up at Allen Fieldhouse remains to be seen. But Traylor, a senior who has been in Lawrence for five years and, because of his brawn, drawn comparisons to former KU standout Thomas Robinson, said he believed this year's team was more physical, throughout the roster, than the past couple of Kansas teams.

Asked to size up the guys who made the biggest jump in terms of their willingness to mix it up and play a more physical brand of basketball, Traylor focused on his fellow big men and a couple of perimeter players.

“Since Cheick (Diallo) has been here, he's gotten more physical,” Traylor said. “He's really been working hard. And Perry's a lot (emphasis on a lot) more physical. Carlton (Bragg is) getting better physically, and Svi, too. Just how they play and looks-wise. Guys are out there flying around, guys checking you all the time. They're getting you ready.”

Speaking of Ellis, he looks a lot leaner and a lot more athletic than in the past. Almost like a different player altogether. It should be fun to see what that does for his game.

Traylor said the trip to Korea, where the Jayhawks won gold in the World University Games and spent a couple of weeks battling with grown men, along with extra work in the weight room with Andrea Hudy — especially by Svi, who did not make the trip to Korea — has added an extra edge to the Kansas roster.

When that edge shows up in practice and teammates are battling each other like sworn enemies, it doesn't take long to realize how much that could help this team during the season.

This is nothing new, of course. When you battle the same guys day after day, week after week, and teammates begin to learn and understand each others' tendencies, frustrations can boil over from time to time. That happens at KU every year and, in many ways, is a good thing.

With the first exhibition game of the season a week away, Traylor said the Jayhawks were still feeling each other out and trying to fall into proper form for the upcoming season. Korea helped that, too, according to Traylor, who said the young guys appear to be ahead of the game because of their experience this summer, when freshmen Carlton Bragg and Lagerald Vick got regular minutes in KU's run to the gold medal.

Diallo, who hails from Mali, Africa, was not eligible to play for Team USA, but Traylor said he, too, has shown the ability to pick things up quickly.

“These young guys right here, they listen and they're coachable, so that's about the best thing,” he said. They have high accolades and stuff, they're McDonald's All-Americans, Jordan Brand guys, but they still listen. That's the main thing. And that's a good thing.” 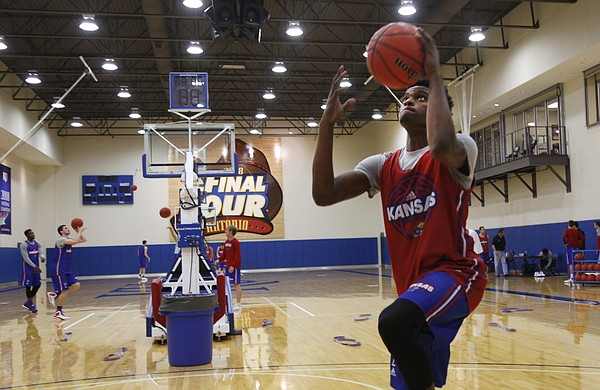 Every year, no matter the identity of the players, it takes KU's freshmen and newcomers a little bit of time to adjust to the college game. Sometimes that lasts for a few weeks of practice and other times it can last until conference play begins. Traylor said this group has had its share of growing pains during the past couple of weeks, but added that most of those were from Diallo because Bragg and Vick gained such a head start by playing in Korea.

But whether you're a fifth-year guy like Traylor or a raw freshman like Diallo, basketball is still basketball. It's just getting comfortable with the demands of playing at Kansas and for Bill Self that can take time.

“The hardest thing to get is just all of the plays,” Traylor said. “It could be one play but there's like six variations to it and there could be 10 things to one play that you have to do and know. There's a lot going on in your head. I feel like your head's going 100 miles an hour. But you've just gotta slow down and just work on it.”

That's where Traylor, the veteran leader, has tried to impact this team the most during the preseason portion of the current season.

“I've been here for so long, I know about everything. I'm like another set of eyes out there for the coaches out there so I pretty much know when guys are doing something wrong. When I know they're gonna mess up, I try to step up before they mess up.”

Great senior leadership from Jamari. Though his AD may not value him, I know that many Jayhawk fans do. His leadership and experience will help this team develop quickly, and develop chemistry.

I think the reason this team is more physical now is because they are older and have filled out their frames more. A 21-22 year old kid is naturally going be more physically mature than an 18-19 year old kid. There are exceptions such as Diallo who plays like a bull in a china shop that helps as well, but Self's mist physical teams have always been his older teams because they're naturally stronger than younger teams.

What is the tale of the tape on the returning guys like Ellis? Have they added muscle weight?

Did their bench press go up?

Has Svi increased in height as well as weight? I assume at 17 that he may still be growing.