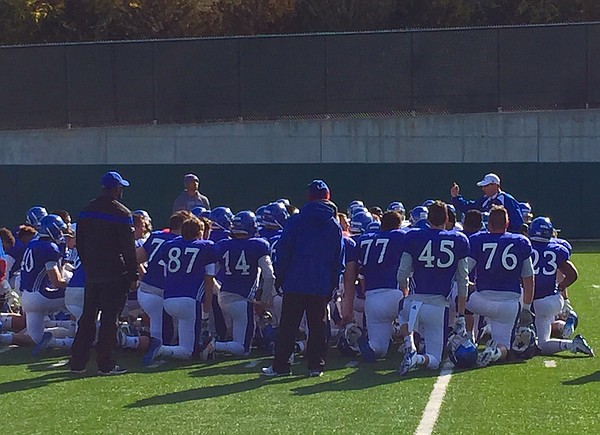 KU coach David Beaty addresses his football team prior to the start of Saturday's spring practice. by Matt Tait

Here's the deal about Saturday's 10 a.m. KU football practice which wound up lasting three hours and featured a — it neither looked like an early-morning practice nor one that took place on the third day of spring ball.

The energy was way up, even by David Beaty's standards, the intensity was through the roof and the effort, emotion and urgency were all as good as I've seen so far this spring.

Credit a lot of that to the fact that today's practice was the first for the Jayhawks in full pads, but credit the rest of it to the coaching staff for demanding it and the players for delivering.

After the stretching portion of practice, the Jayhawks ran over to huddle up for their pre-practice instructions. Not good enough. Beaty made them go back to their spots and do it again, with assistant coaches yelling all around, “Urgency, urgency, urgency.” “I better see some energy out here today.” “Let's go get it.”

Pretty soon, this will merely be the standard for this KU team. But until everyone is used to it, it will still seem pretty impressive.

Here's a quick look at the rest of what caught my eye at Saturday's practice:

• Offensive coordinator Rob Likens is a master communicator. He speaks clearly, makes it known exactly what he's looking for at all times and has the patience to explain it thoroughly — even going as far as to show it himself if he has to — when guys don't quite get something. This was evident throughout the day, but particularly during a drill designed to teach slant keys and concepts to the wide receivers. With each rep, Likens barked out orders: “Better toe stick. Eyes back. Look the ball in.” That last request was another theme of the day for Likens, who actually took his sunglasses off while yelling at a running back at one point so they didn't fall off of his face when he screamed, “Look the ball all the way in to your tuck.” He kept yelling it. But it didn't take the Jayhawks long to understand the importance of following those orders and carrying them out.

• KU coach David Beaty stepped in to play a little quarterback during a drill for the cornerbacks. Not surprisingly, Beaty had a little zip on his ball and even overthrew it a few times. Probably too jacked up. This concept of coaches jumping into drills is commonplace all over the field. Likens served as a defensive end and Klint Kubiak worked as a cornerback during an option drill. Calvin Thibodeaux and Kevin Kane jumped in and did up-downs with the defense after the offense got the better of a short-yardage drill in which the offensive line helped KU's running backs score four times out of seven against the D-Line in a heated competition at the mid-point of practice that featured the offensive players not participating crowding the 50 yard line and the defensive players not involved crowded the 45 yard line. It made for a hostile scene and tempers and emotions ran hot. As Beaty said the other day, there's a competition aspect in just about everything the Jayhawks do out there. 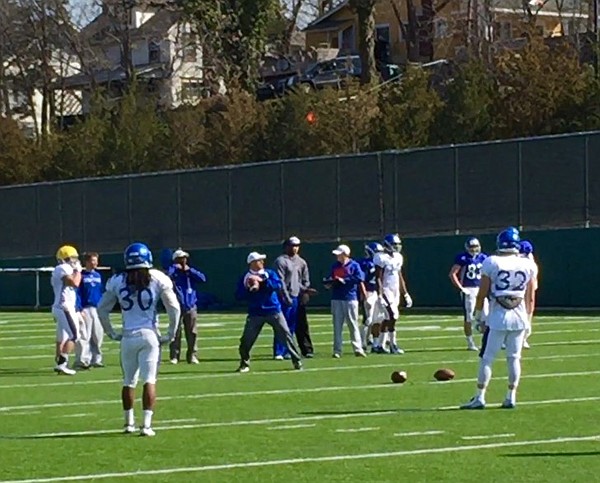 David Beaty, playing quarterback instead of head coach, looks to throw during a drill for KU's cornerbacks at Saturday's practice. by Matt Tait

• I thought It was pretty cool how much the coaches emphasized communication. A lot of these players have been role players during the past few seasons and have not had to be vocal leaders. But the coaches are trying to change that. At one point, at almost the exact same time, I heard Likens yell from one field, “You're too quiet, guys,” while co-defensive coordinator Kenny Perry yelled from the other field, “I didn't hear a thing,” to his cornerbacks. Again, soon that will be something the coaches don't have to remind these guys of. But, for now, they're not taking anything for granted.

• Speaking of Perry and yelling, during one drill, he jumped on his veteran cornerbacks for letting a walk-on who had been in the program for just three days jump to the front of the line ahead of them to start a drill. It's not that Perry didn't want the young guy to get the reps, he just wanted to see the veterans want to be the guys who led things off. They did the rest of the practice.

• Junior defensive end Anthony Olobia continues to look sharp and quick out there, but on Saturday he showed some toughness, too. After landing awkwardly following a rep in a D-Line drill, Olobia came up limping and defensive coordinator Clint Bowen immediately sent Damani Mosby in to take his spot. Rather than running off, however, Olobia waved Mosby back to the sideline, turned around to yell to Bowen that he was OK and stayed in and finished the drill. It's a small detail but a clear sign that these guys want to play for these coaches.

• Cornerback Ronnie Davis makes his share of mistakes, but he's got great feet. That might be one of the reasons the coaches ride him so much. With feet like his — which former cornerbacks coach Dave Campo always marveled at, as well — Davis is a guy who should be playing as long as he can execute his assignments, make plays and remain efficient.

• Speaking of cornerbacks, newcomer Brandon Stewart looks like he's got some solid skills but he's smaller than I expected. Listed at 6-foot, 171 pounds, Stewart might just look a little on the light side because he's being asked to replace veterans JaCorey Shepherd and Dexter McDonald. There's still plenty of time for Stewart to get bigger and he already looks good in terms of physical play and coverage skills.

• The first-string offensive line looked the same — Larry Mazyck at right tackle, Junior Visinia at right guard, Jacob Bragg and center, Bryan Peters at left guard and Jordan Shelley-Smith at left tackle. Nothing new there. But the second string O-Line shaped up like this, right to left: Jayson Rhodes, D'Andre Banks, Keyon Haughton, Joe Bloomfield and Devon Williams. Still all kinds of time for movement up there — especially when you consider a couple guys (Joe Gibson and Will Smith) are coming back from injuries — but that's how things look right now.

• Former Jayhawk great Darrell Stuckey was on hand for Saturday's practice with his son. They hung in there for two-thirds of the practice and did equal amounts of watching, playing catch and dancing. Stuckey looks great. Several former Jayhawks from last year's team were out there again today, too. 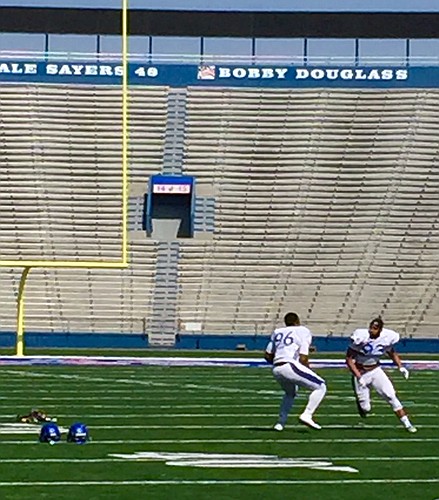 Energy, enthusiasm, communication, and attention to detail. I like it. Not saying it will give us wins this year, but the attitude of the coaches breeds attitude for the players. We may not have the all-star team, but it can at least start with the all-star attitude.

Thanks for the updates.

For those who have not seen it there is a video on jayhawkslant featuring Kenny Perry at the second spring practice going through drills with the cornerbacks. Its an awesome video and shows the intensity and attention to detail that has been highlighted in this article. Good is not good enough for Perry and I love that. Check it out if you have not already. Its free to watch for members and non members.

Link for the video Jonathan refers to:

I'd think the coaches would get annoyed having to compete with that constant music played loudly during practice..