The Day After: Edged out by Iowa State 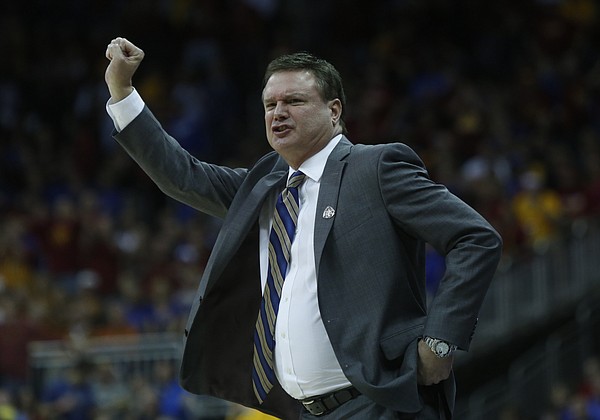 KU coach Bill Self signals to the Jayhawks in the Jayhawk’s 70-66 loss to Iowa State in the championship game of the Big 12 Tournament Saturday. by Richard Gwin

Not just because KU lost and not even because it lost a game it probably should've won. But because for a half Self looked as proud of and pleased with this team as I'd seen him at any point all year — and we're talking by far — and then, poof!, just like that old KU nemesis, Mr. Inconsistency, reared his ugly head again and did the Jayhawks in.

Self has said that winning the Big 12 tournament is not the greatest feeling in the world and that losing it is not the biggest heartbreaker because Selection Sunday trumps everything the very next day.

But it sure looked like he was thrilled about the toughness and fight and signs of life his team showed in that sensational first half against a very good Iowa State team, and watching that disappear completely in the second-half collapse had to sting a little more than he might have let on.

If you've seen it once, you've seen it a thousand times with this team, so the extremes the Jayhawks delivered on Saturday evening at Sprint Center probably were not all that surprising to most. Sure, they won't last long in the NCAA Tournament if they can't fix that. And, yeah, they're probably a Sweet 16 or Elite Eight team at best if such issues continue to plague them. But those issues have plagued them all season and been a big part of the reason this has been such a wild and unpredictable season from a team that has struggled to find consistency and its identity. This is new territory for Self and the Jayhawks. Usually by now they've long known what kind of team they are and what they're going to get on most nights. Not with this group. It looks as if this team's best chance is to make the other team play ugly, and these guys are pretty good at that. How far that can take you in the Big Dance is anyone's guess, but I'm guessing we're going to find out.

1 – That's two games in a row where things appeared to click for Wayne Selden and that's great news for Kansas. Even though it wasn't always pretty, Selden was terrific in the way he attacked during the Big 12 tournament and inspired others to follow his lead. The guy can be a match-up problem for opponents if he's locked in, and his ability to get to the rim and/or the free throw line could provide a huge lift for this team and an offense that at times looks incredibly passive and stagnant. Selden earned his spot on the all-tournament team in Kansas City. Now the challenge is to keep him playing this way while getting Perry Ellis, Kelly Oubre and Frank Mason going with him. 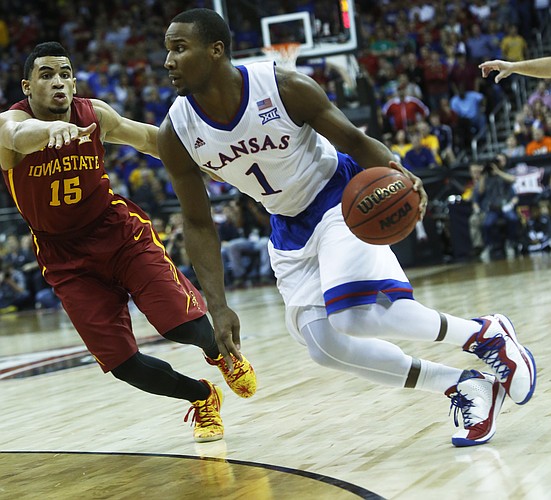 Kansas guard Wayne Selden Jr. (1) tries to drive on Iowa State's Naz Long (33) in the Jayhawk’s 70-66 loss to Iowa State in the championship game of the Big 12 Tournament Saturday in Kansas City, MO. by Richard Gwin

2 – Give KU credit for getting back into it and tying the game at 63 with about minute left after yet another insane Iowa State run brought the Cyclones all the way back from 17 down and put them up a few possessions in the blink of an eye. KU could've folded there very easily but didn't. 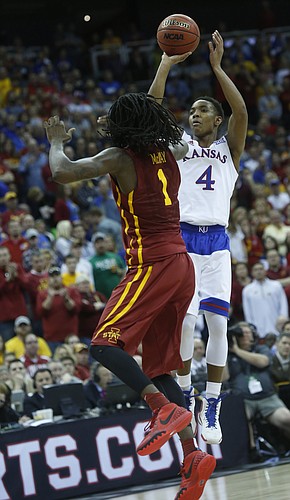 3 – Devote' Graham and Frank Mason are playing pretty well together right now. Both dished four assists vs. one turnover and both made some big shots for the Jayhawks en route to building that 17-point lead. KU is going to need both guys to continue to look to score but not at the risk of failing to get others involved. Having the both be able to run the point and attack with their own offense helps keep things balanced. It's a nice one-two punch for KU to have and those guys could be critical to KU's success in the next couple of weeks.

1 – I'm not sure if the psyche of this team is built for March. They're fantastic when things are going well. They play with good energy, play together and play hard. But as soon as things stop going well, they change their look completely. You can see it in their eyes and on their faces. I'm not saying it's easy to play through rough patches, but some teams flourish in those moments. This is not one of them. This group has been in and won a ton of close games and flashed some incredible comebacks — at Allen Fieldhouse, mind you — but it looks to me like a group that will need to start hot and fast in every game from here on out or risk going home no matter what round we're talking. 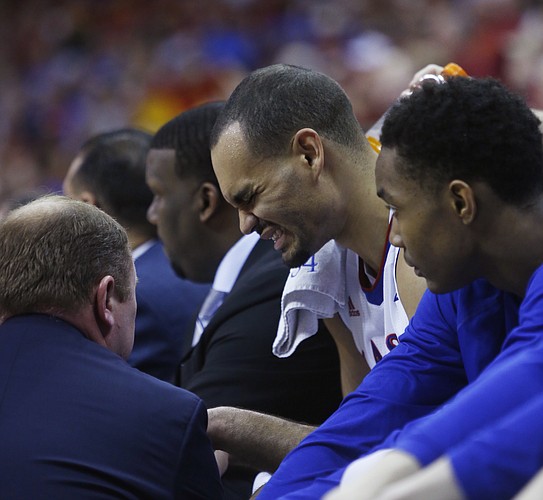 Kansas forward Perry Ellis (34) grimaces on the bench during the Jayhawk’s loss to Iowa State in the championship game of the Big 12 Tournament Saturday. by Richard Gwin

2 – Injuries. Nobody's “fresh” at this time of the season, but not everybody's as beat up as Kansas either. Self said he anticipated having everyone healthy and ready to go by Friday, when the Jayhawks are likely to open NCAA Tournament play in Omaha, but as much as a few days off will help, I'm not sure that's nearly enough time to get everybody back to full health. Perry Ellis is going to be playing through pain the rest of the way. It looks like the toll of unexpected heavy minutes has worn down Landen Lucas and limited his effectiveness and Frank Mason and Wayne Selden are both less than 100 percent. All the more reason for Self to at least consider giving a few more minutes here and there to guys like Hunter Mickelson and Sviatoslav Mykhailiuk, who actually are fresh. Both played well as recently as this weekend and giving them 10-12 minutes a game to limit the wear and tear on KU's ailing rotation guys might help. 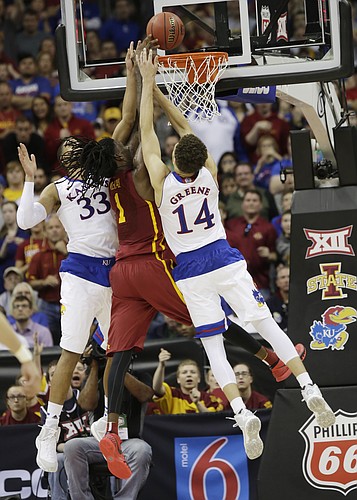 3 – KU got beat on the boards — only by three (37-34) — and gave up two offensive rebounds at the most crucial time, with the game tied at 63 and after two Iowa State misses. It wasn't just that the Cyclones beat them to the glass in those instances as much as it was that they did it easily. Part of that was KU being beat up or short-handed, but those are just excuses. This team needs all five guys on the floor to box out and crash the glass in order to make up for some of its shortcomings in that area, and on Saturday, on perhaps the game's most critical possession, they came up short twice.

• Handed the Jayhawks just their second loss in the Big 12 title game, and its first since 2002, when they lost the tournament to Oklahoma.

It's tournament time and Kansas will learn its fate just after 5 p.m. tonight when the CBS Selection Show unveils the bracket. KU will almost assuredly head to Omaha for its first two games, but whether those will be played as a No. 2 or a No. 3 seed, as well as which region the Jayhawks are in, remains to be seen.

At this point, there's more than a fair chance that KU will wind up in the same region as Kentucky. That's incredibly likely if they're a 2 seed. And while that will undoubtedly upset hundreds, if not thousands, of KU fans from coast to coast, there's one important thing to remember about being paired up with UK that might help — in order for that to matter, this team has to get to the Elite Eight first, and, although that's certainly possible, it's far from a lock, maybe not even likely.

It all will depend on match-ups and which Kansas team shows up. The Jayhawks should — SHOULD — win their first two games and reach the Sweet 16. Anything short of that would have to be viewed as a failure. Anything beyond that, though, might actually be this team overachieving. Should be fun to follow it and find out what happens.

Be sure to check back with KUsports.com this evening for all kinds of reaction and insight into KU's draw. 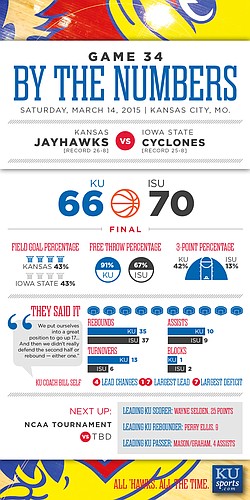 I think your analysis is spot on, Matt.

I've been saying since the middle of the season that this looks like a Sweet 16 team. In fact, I'd say the chances are better of losing in the second game (or even, God forbid, the first game) then making it to the Elite 8 or beyond.

The one thing that gives me some hope is that KU lost its last two tournament games because of terrible play from the point guard position, and I think that at least on that end they're vastly improved this year. Maybe Mason has the type of toughness and ability to take over games that can lead KU to greater heights. But I sure don't feel great about this team's prospects.

Need to guard in space because with don't have a Withey or Robinson in the lane to fix mistakes. Should have gone to zone much sooner - at least do something to prevent 10-0 runs. The offense wasn't clicking and ISU clearly changed its offensive scheme in the second half. Oh, the days of Ted Owens who would change defenses every time down the court. With Ellis less than fully mobile and not muscular enough to push Niang out, a zone makes sense. Otherwise, we were using 4 to guard their 5 because Lucas and team couldn't handle McKee. Is Lucas really quicker than Traylor?

Totally agree on the zone much sooner. Why wait until you're down 7 before implementing it? Why not go to it when we were still up 10 and maybe we ward off the inevitable. Too little too late.

Have I just entered the Twilight Zone??? Are you seriously longing for a return to the days of Ted Owens?!?!?