What caught my eye at Tuesday's practice 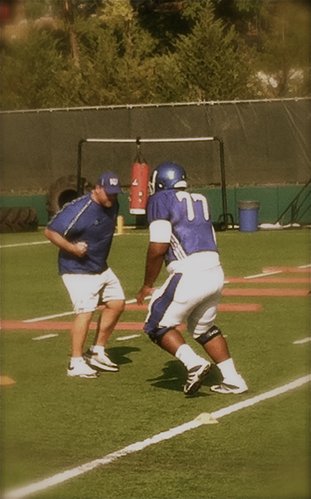 It did not take long to figure out that things were different out at practice today. Pads popped, coaches barked and the theme of it all just seemed a little more intense.

Makes sense. The season opener is just four days away.

One thing I noticed was the pace of practice. Not only were guys turned up a little bit more, but they also got in and out of their stations a little faster. In fact, some stations that we had become used to seeing throughout August were skipped altogether. Could be because they’re in game-prep mode now instead of focusing so much on fundamentals and philsophies.

With that in mind, here are a few other things that stood out at Tuesday’s practice:

• Ben Heeney looks like a first-string linebacker. Physically, we’ve known all along that the 6-foot, 225-pound sophomore had enough to play the part, but now he looks a little more confident, a little more explosive, a little more intense. I’m sure he was all of those things before. That’s probably what landed him the job as the starter at Mike linebacker. But I could not help but think that the knowledge that he’s the guy has inspired him to turn things up even more. He led off most drills we saw and was the most aggressive guy I saw out there at any position. Impressive. Expect big things.

• Speaking of linebackers, senior transfer Anthony McDonald was not on the depth chart when it was released today, but KU coach Charlie Weis said he could play and he would be back on it when McDonald was back to full strength. With that in mind, it seemed to be an encouraging sign when I saw No. 51 going through drills with the linebackers to start practice. He looked a little tentative, maybe a half step slow, but his effort was all-in. Just when I was noting all of those things, I noticed that he wound up back on the exercise bike. But, hey, maybe that wasn’t a setback. Maybe the mere fact that he was out there at all was a sign of progress. Time will tell.

• Sophomore wide receiver JaCorey Shepherd again was wearing white and started off working with the DBs.

• Darius Willis, the junior linebacker who started every game last season at middle linebacker, has fallen off the depth chart and appeared to be working with the defensive line early during Tuesday’s practice. Interesting. Keep an eye on that. One other note about Willis: Even though he’s not in the immediate plans at LB, his head’s still in it. I’ve seen no evidence of a bad attitude or any pouting and he’s as engaged as anyone out there during practices. Good sign. Good dude.

• I know people know that the D-Line has improved, so much, in fact that the coaching staff has even gone as far as to say that these guys “look good,” but I definitely think this will be a pleasant surprise right out of the gate. These guys are physical, fast and relentless. I noticed that particularly out of John Williams, Kevin Young and Josh Williams during Tuesday’s drills. If they perform in games the way they look in practice, this defense could take a major step forward.

• Finally, the Coach Weis song of the day was “The Rising” by Bruce Springsteen.

Let the countdown begin... or should I say continue?

I can't believe that LJW doesn't have a clock ticking down in the corner of the webpage.

You need an updated percentage wheel for number of wins this season. 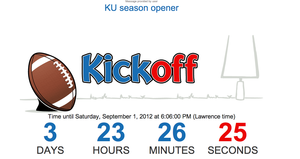 Countdown to kickoff 2012 by Matt Tait

Ok, so what's a hawk need to do to be able to watch the opener on Saturday? I'm willing to pay a mildly exorbitant amount of money, if need be.

Come to my house if you want. Got a 62 inch flat screen and the frig is full of ice cold Miller High Lifes. A great bargain at the not too exorbitant price of $500.00!

So excited about Ben Heeney, all last season I knew he would wind up a very special player for us. . . . .maybe all time great by the time he is done here. Plays the game so hells-bent but has the athletic skill and smarts to go with it, he will play with the effort of a walk-on every snap.

Tait, thanks for all the coverage, can't wait to see these guys out there.

You think Heeney is big/strong enough to play MLB in the Big 12? He's going to be facing 300 lbs linemen who will be upfield blocking and I think that could be tough for a guy who is 225 lbs.

Additionally, are you surprised to see Taylor Cox ahead of Bourbon?

Good linebackers dip and avoid offensive lineman, even a 260 pound linebacker is not helping too often when tangling with an o-lineman; mainly I hope our d-line is good enough to capture most of the opposing o-line's attention.

I have the same concern about our smaller linebackers. Hopefully, their speed will allow them to avoid the 300 pounders. Personally, I'm not surprised that Cox is ahead of Bourbon. I never thought Bourbon really showed us anything special. Wasn't he a 4 star recruit?

BB has definitely looked special to me when he's been healthy. If he's not running by or away from a defender, he's running over him and dragging him 5 yards. A 220 pound sprinter with momentum is a load for any LB or S. You absolutely CANNOT arm tackle this guy.

Cox may be a little shiftier around the line of scrimmage and consistent with 4-5 yard carries, I don't know, but you have to give Bourbon his touches, because like Pierson, he's a threat to house it on every carry.

Don't forget that Bourbon is coming off an injury and didn't even play in the Spring game. He's still ramping up to full speed here. If he stays healthy this year, I think he will impress you.