What caught my eye at Day 13 of Fall Practice 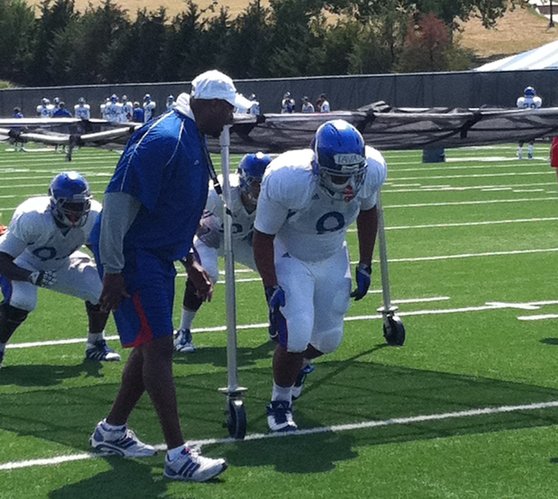 Jordan Tavai in pads and no Ty McKinney.

Those were the two things that jumped out at me from Tuesday’s KU football practice.

The McKinney news was at least mildly surprising, considering he had been telling people for days on Twitter that he would be here today. At the same time, that is Twitter and it’s hardly written in stone.

So maybe tomorrow. Or maybe not.

As for Tavai, he has been here but today was our first look at him in full pads. He definitely looks athletic and appears to have long arms, but you can also see evidence that he has not gone through Scott Holsopple’s offseason conditioning program. He’ll get there, though. And he’ll play.

As the defensive line did various drills, D-Line coach Buddy Wyatt and others seemed to really stress “burst” with Tavai. Makes sense, considering he’s a tad bit behind the other guys in terms of football shape. But he looks to have good feet and good strength. Give him a couple of weeks and he’ll start to look like the others. 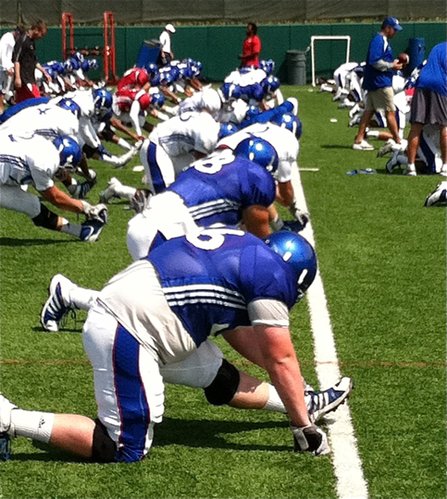 The Jayhawks go through Tuesday's stretching session on what turned out to be a warm and sunny afternoon. by Matt Tait

Here are a few other things that caught my eye Tuesday:

• Defensive end Josh Williams is a beast. I know that not because he made a bunch of plays on Tuesday or knocked somebody out but because he warms up like a monster, too. After the team was done stretching, as the players ran to their position drills, Williams barked like a madman and yelled, “Bring your guns out D. Bring your guns out D.” They’ve said he was a leader and now I see why.

• There’s been some talk of offensive tackle Aslam Sterling making good progress and that continues to be the case. Tuesday, Sterling got a lot of work with the first team O-Line, but not without a wake-up call from one of the KU coaches. “Aslam! You’re getting reps with the first team today. Pick it up,” the coach yelled. Or something like that, anyway.

• Linebacker Anthony McDonald and defensive back Brian Maura remained on the exercise bikes and both continue to be day-to-day, according to KU coach Charlie Weis. Every day they sit out brings an advantage for someone else at their position. That’s not a huge surprise for Maura, who moved from receiver in the offseason and is pretty far down on the depth chart as it is. But that’s potentially big news for McDonald, whose absence has opened the door for Ben Heeney and Schyler Miles to get more reps at middle linebacker. Heeney has been working with the first team linebackers for the past couple of practices.

• Finally, the Coach Weis song of the day was “Lay Your Hands On Me” by Bon Jovi. Great song for the KU linemen, but not such a good idea for the defensive backs. 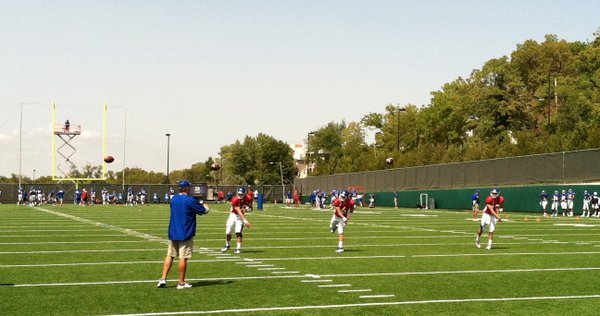 Do you see any chance of James Sims suspension being reduced to 2 games or less?

Was that a serious question?

Holy crap! You just don't get the fact that Turner Gill has moved on, do you?

It wasn't that dumb of a question. James Sims has been a model citizen before and after the incident. I personally am not for reducing his punishment, but a reward for good behavior and effort would not be out of line by any means.

I love these updates! I always read KU Sports in the morning and then wish there were more stories for the afternoon. Now I have them.

Any word on uniform design for the season? I know the names are 'back', yes pun intended, but other changes in store?

I like that the names are back, but I think they should wait on new designs until they start winning games. Then they ca go all Oregon Ducks in their uniforms if they want.

Very concerning that McKinney isn't with the team yet. D-line is not the position group that we can afford to have guys go absent.

"McDonald, whose absence has opened the door for Ben Heeney and Schyler Miles to get more reps at middle linebacker"

No mention of Willis? Has he fallen so far? He and Sizemore were supposed to be the big transfers from the past, but sure don't seem to en be mentioned anymore.

There's still time. And Willis is a great dude with a great attitude. You won't see him quit.

Are Heaps and Cummings to the left of the dude in blue?

Good to have a madman on D!!