What caught my eye at Day 9 of Fall Practice 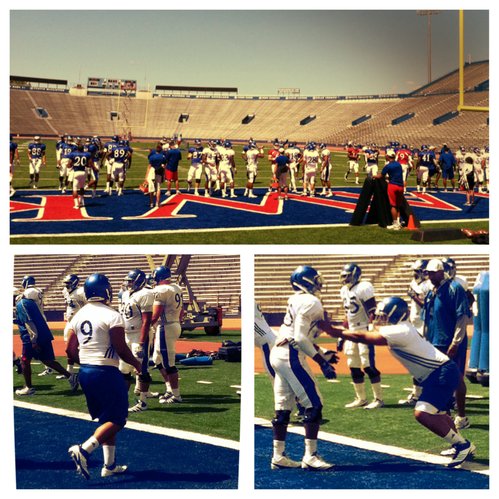 It might as well have been called Jordan Tavai Day at Kansas University football practice on Friday, as the arrival of the big man from El Camino CC in California, was the only thing on the minds of most media members.

Tavai, who arrived late because he was busy finishing up classes in California, dressed out in shorts and a helmet on his first day. Because of NCAA rules, he'll have to go through two practices like that and two more in just a helmet and shoulder pads before he'll be able to suit up in full pads.

Didn't matter. Just seeing Tavai out there was good news for the Jayhawks, and, even though he'll be playing catch up for the first couple of weeks, it does not take much effort to see how much he'll impact the program.

For starters, Tavai is thick. He's listed on the roster 6-foot-3, 290 pounds, and he looks every bit of that. What’s more, like offensive lineman Aslam Sterling (6-5, 360), who also arrived late, Tavai moves pretty well for a man his size.

The KU coaching staff has said that Tavai has the skill set and versatility to play either defensive tackle or defensive end. They’ll make that decision based on what the other guys around him show this preseason. From looking at him, I could see him playing either, but I have to tell you that, to me, he looks like a defensive tackle all the way. I like the idea of his athleticism at that size causing problems in the middle for opposing offensive lines.

That’s just one opinion from one day of watching the guy for 20 minutes. And, knowing my analysis works, he’ll probably wind up a D-End for sure now. It sure is going to be fun to watch how it plays out though.

A couple of other things that stood out about Tavai: He looks explosive, he uses his hands very well and he appears to be in pretty good shape.

Although Tavai was the main attraction at Friday’s practice, here are a couple of other quick things that caught my attention:

• As you can probably tell from the photos, today’s practice took place in Memorial Stadium. Could be because the coaching staff wanted those guys to get used to what’s coming up tomorrow — Fan Appreciation Day, 8:45-10:45 a.m. at Memorial Stadium — by letting them run around out there today. Maybe it was just the day or the change in location, but today’s practice seemed a lot livelier than some of the others.

• That was true at just about every position, but the three that stood out the most to me were: Offensive line, Defensive backs, Tight ends. Go figure, those groups are led by Tim Grunhard, Clint Bowen/Dave Campo and Jeff Blasko, four of the most intense coaches in the program. Saw some real good hitting out of the D-Backs during a one-on-one drill.

• Speaking of the secondary, safety Brian Maura was on the bike again for the start of practice. I’ll be sure to find out what’s up with him the next time we get coach Weis.

• Finally, the Coach Weis song of the day was “Darkness on the Edge of Town” by Bruce Springsteen. It’s a great song, and, despite its heavy vibe, it has a little “edge” to it that I could see getting some guys fired up to hit. 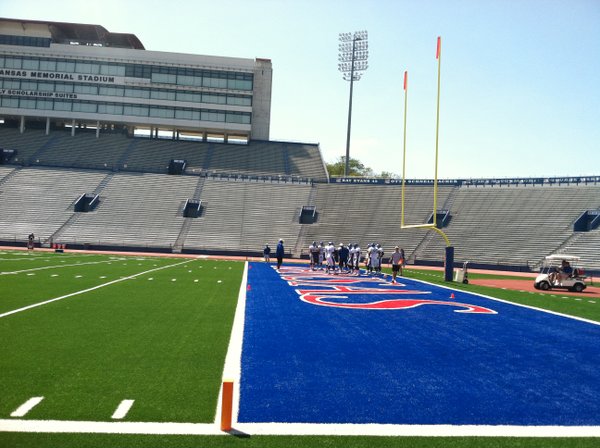 KU's defensive line works in the north end zone on the far side of the field during Friday's practice. by Matt Tait

One more DT here and we will be complete.

When and how often do depth charts come out? This daily ocverage is getting addicting!

They just came out with a depth chart a week ago Wednesday (August 1). I doubt they release another one until right before the 1st game.

I'd guess the D-chart gets updated a week before the first game. Is there a final scrimmage then. That's been the case with some QB comps in the past though obviousy more important at that position. As CW has said for the D, they're really interested in the 2-deep. It will be really interesting to see how the game rotattion goes. Come on Sept.

Matt, What is the media attendance like on a day-to-day basis? How many there? Are you the only regular? National v local?

That's great news that Tavai is finally here and in practice.

He's got a lot of speed for his size too. Heck, he had 5 sacks, 7 QB hurries, and 58 tackles last year for his JUCO. I don't think you can get numbers like that from the DL even at the JUCO level without some good speed and I think that speed is the main reason why he's going to possibly play DE.

Can't wait for McKinney to get here on Tuesday and thanks for all the great KU football coverage Matt!

Honey Badger is looking for a new place to play.

I'm soaking up everything I can read about KU FB. Haven't been this excited about Jayhawk Football since Mangino's Orange Bowl season (and the OB which was a fantastic experience). Rock Chalk.