Kansas guard Naadir Tharpe, left, and guard Niko Roberts, right, stop for a photo in front of the Eiffel Tower in Paris with Niko's younger brother Justin on Thursday, Aug. 9, 2012. 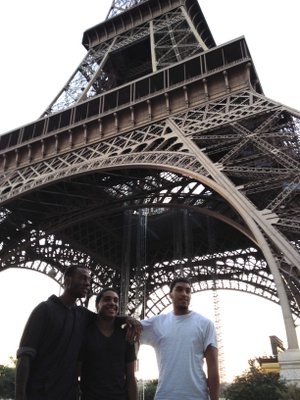 The Kansas men's basketball team traveled by high-speed train from Zurich to Paris before touring the Eiffel Tower on Thursday, Aug. 9, 2012.

Paris — From atop the second story of the Eiffel Tower — nearly 400 feet above the city of Paris — Kansas freshman forward Landen Lucas leaned against a railing and tried to describe the view around him.

“It’s unbelievable,” Lucas said while looking at the horizon. “You don’t get a chance to see stuff like this too often.”

After winning the first two exhibition games over the Swiss national team Tuesday and Wednesday, the KU men’s basketball team made its way from Zurich to Paris on Thursday.

Following a four-hour, high-speed train ride, the Jayhawks spent two hours at the most-visited monument in the world.

Players took turns snapping photos of each other with cameras and cellphones after ascending the Eiffel Tower in an elevator.

“You’ve got to be in (photos) to prove you were there and have those memories,” Lucas said. “I’ve definitely been taking a lot of pictures and videos for back home.”

Lucas especially wanted to document the day for his parents, Shelley and Richard, who weren’t able to make the trip.

He planned on sharing his snapshots with a few more people as well.

When asked about his impression of the 1,063-foot structure, KU freshman forward Zach Peters said it was “crazy” before stretching his neck to look to the top of the tower above him.

“You don’t realize how big Paris is until you’re up here and you see everything,” Peters said. “It’s been awesome so far — a really awesome experience.”

KU coach Bill Self also enjoyed the view, stopping to take cellphone photos of the scenery while circling the structure with his wife, Cindy, and daughter, Lauren.

The players and coaches received an extended look around Paris earlier in the day, taking a two-hour bus tour in the afternoon.

“I think there’s so much to do, you’ve got to be here longer than four days,” Peters said. “We’re going to try to do as much as we can. I’m excited. I think this is a really cool city.”

The Jayhawks will have two exhibition games against pro team AMW Team France at 1 p.m. Central on Saturday and Sunday in Paris.

This is a perfect time for this trip - hopefully it proves to be a real bonding experience. We will need some serious production from a few freshmen / gameplay first-timers (BMac), which is a deviation from last season. Hopefully this time together helps them gel as a unit. Nothing inaugurates a long and fruitful friendship like sharing a hotel bathroom and listening to someone snore all night.

you mean, Kevin? as in Kevin McCallister from Home Alone? Lolz

Paris is a terrific city to see on a walking tour. I'm glad they got to visit the Eiffel Tower and hope they get a chance to take a dinner cruise through Paris on the Seine. Maybe they can visit the Louve as well.

It's not really a silent r, it's there, but kind of a half r when you say it.

Isn't louve the name for a female wolf??? Not that there is anything wrong with that!! :)

Reflecting on this years team I realized that we don't need much from these freshman except maybe minute eaters- we have four seniors and a sophomore that are fully capable of taking care of this team. We were able to make the final game with five or six guys last year so anything extra from the young guys is gravy.

Respectfully, I am not sure I agree with you. BenMac and Jamari are more than just freshman with BenMac slated to start. And I am pretty sure Perry will be an integral element by conference time.

I do agree, however it is a luxury that you can put out a potential starting five with NCAA National Championship experience,

Hey Lauren, I would like to take you out for a nice seafood dinner... and unlike Dorothy Mantooth, I will call you again afterwards!

Dorothy Mantooth is a saint!

I agree totally with EverRisingHawk. A lot of these freshmen are going to be counted on during the season and this time together, the extra game experience, the learning new things, experiencing new things, getting to know each other, is going to be an invaluable jump start to their chemistry.

Jesse I am soooo jealous, man. That is one sweet gig you got there. Did you get some pics with you and the team at the tower?

Here's looking at you, kids. The most memorable time in Paris is always the first time. But...

Bogie said the most memorable line about Paris, to Bergman in Casablanca: "We'll always have Paris."

I'd quote the JayZ/Kanye song but I'd probably get banned.

Lafayette we have returned!

The best part of Paris in August????

The comment about Self, wife and daughter is in reference to them "circling the structure." Most likely, Tyler was with some of his teammates elsewhere on the grounds.

I still think he was left "Home Alone"!

Don't you think that being the coaches son Tyler is going to be keeping a low profile. Nothing would be worse for the team than having the coaches son hogging the limelight. I think not hearing about Tyler is a very good thing and smart on his part.

Questions for the two games in France:

10.Which hurts week..a knee to the privates or three straight hours of Bieber?

Sasha Kaun led Russia with 14 points in a losing effort in the semis.

just saw the box score for Russia in the Olympics. Didn't realize Sasha Kaun was a starter. How come there hasn't been more coverage on here?

News about future Jayhawks: The roster of 24 listed today on Zagsblog.com for the Under Armour Elite (under 17) game includes Conner Frankamp and Brannen Greene. Roster also includes a number of recruits still undecided and which are considering KU.

Mentions that the dunk contest and game will be broadcast on ESPNU over August 24-25. I assume the game will be on the 25th?

Thanks for the info. That 2013 class might be the one. A stud big (Lawrence or Shepherd), the point guard Self wants (Barber or Jackson) or maybe a surprise (Seldon or Freeman), and this will be a top 3 class, maybe the top class. I won't even suggest we'll get Randle or Parker. Greene is at #31 and Frankamp #28. Perfect spots. No early exit possibilities.

Big news recently is that our #2 point guard target behind Barber, Demetrius Jackson, is now at #18 in the updated the Scout rankings. He's at #70 in Rivals for some reason.