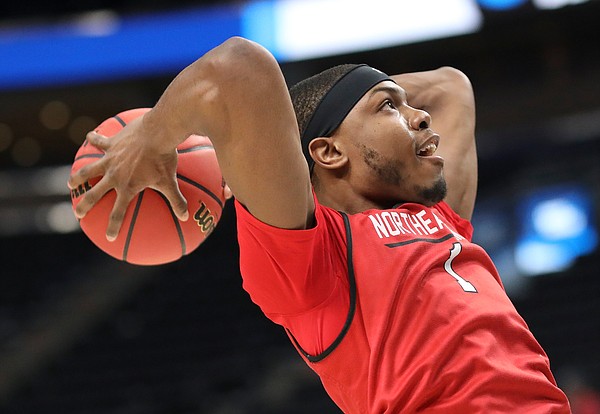 Hey, when your four starting guards all shoot about 40 percent from deep, that’s pretty hard to ignore.

But the No. 13 seed Huskies aren’t just gunners. The team’s glue guy and the player that could be the key to Northeastern slowing down Kansas in the first round on Thursday afternoon is Shawn Occeus, the Colonial Athletic Association’s 2018 Defensive Player of the Year.

So does all that 3-point talk irk the team’s 6-foot-4 defensive stopper?

“I mean, that’s the game. That’s what it is today. It’s turned into a 3-point shooting game,” Occeus said Wednesday inside the Huskies’ locker room. “I don’t need no credit for anything.”

He’ll get it on Thursday if his work on that end of the floor helps Northeastern pull off the upset.

Whether Occeus, who comes off the bench, ends up drawing the assignment of guarding Dedric Lawson or one of KU’s guards remains to be seen. He was coy about the game plan a day ahead of the No. 3 versus No. 14 matchup in the Midwest region.

“It’s not up to me who I'm going to guard. It is up to the coach. I'm willing to guard anyone on the court, obviously,” Occeus said, when asked whether he would defend Lawson. “He is a great player. He could do a lot of things on the perimeter and the post. For us, we're going to stick to the game plan, watch a lot of film on him and just pick out his weaknesses and stuff. Like I said before, he is a great player. We are confident it won't be one person that will hold him to his averages. It will be everybody, it will be a whole team effort and we will look forward to that.”

Various members of the Huskies have said they are better as a defensive unit with Occeus on the court. The junior defender, who missed 19 games during the regular season due to injuries, takes pride in creating turnovers.

“Ever since I was a little kid I always loved stealing the ball. I used to play football and I was always on the defensive end. I always loved getting interceptions and stuff like that,” said Occeus, who averages 1.4 steals per game for his career. “So when I’m out there on the court obviously I don’t gamble for steals — I’m not trying to chase stats or anything like that. I’m just aggressive. I’m just playing my game.”

Back during the non-conference portion of the schedule, Northeastern (23-10) beat Alabama, but lost other marquee matchups against Virginia Tech, Davidson (twice) and Syracuse.

Occeus didn’t get to play in any of those games.

“Personally, it was very tough, because I looked forward to playing against those teams. I felt like last year for me was a good year. I felt like I got my foot in the door in terms of feeling like I belong in college basketball. So I wanted to prove — we wanted to prove — we’re a good team and a team to be reckoned with,” said Occeus, who is averaging 10.1 points and 2.7 rebounds in 14 appearances as a junior.

“So being out and missing those games, it definitely sucked. But I knew that I was gonna get my chance in the season still to prove that point, and I think I did so in the (CAA) tournament. And I’m gonna continue to do so, regardless of what happens,” he said.

While watching those games in November and December, Occeus observed instances in which he knew his presence would have helped.

“Seeing guards and point guards be able to score the ball as much as they did, I mean, obviously being the player and competitor that I am, I care about defense and stuff like that. Seeing that ticked me off,” he revealed.

Over the course of the year, six of Northeastern’s 10 losses came without Occeus. After watching helplessly for so much of the year, Occeus now has a chance to help the Huskies achieve their greatest victory of the season, and the program’s first NCAA Tournament win since its last Big Dance bid, in 2015.

Is it safe to say that Northeastern, a team that struggled to get stops through much of the regular season and is ranked 144th in defensive efficiency by kenpom.com, will look different against KU than it did against its non-conference Power Five foes a few months ago?

“I don’t know. We’ll see,” a cautious Occeus said. “We can’t just say that we are or that we’re not. At the same time, we do feel confident knowing that a lot of guys are healthy and ready to play. We’re not gonna go in there intimidated or scared. We know each other’s tendencies, and the chemistry and maturity of this team is at an all-time high.”

defending this KU team should be easy...just pack the paint and make them shoot 3's..

Dotson and Grimes wide open 3's? I'll take that. Garrett and Agbaji? Not as much.

"Just ..." is a management phrase that lacks knowledge of the details of implementation.