Jayhawks showed some vital mental toughness by winning on road 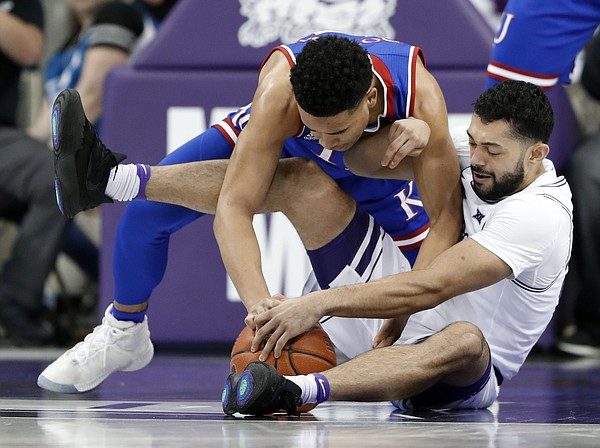 As currently comprised, the Kansas roster is too flawed overall for the Jayhawks to play the type of aesthetically pleasing basketball that has characterized so many of their predecessors coached by Bill Self.

But they have now proven, most importantly to themselves, that they can offset some of their depth, ball handling and shooting deficiencies with one of the qualities that their coach appreciates most.

By winning on the road for a change Monday night at TCU, and withstanding the Horned Frogs’ late rally when they’ve collapsed under similar circumstances earlier this season, the Jayhawks displayed some true mental toughness.

When so many other away games took turns in the wrong direction for KU in the final minutes of regulation, scrapping to overcome those potentially haunting memories made what the group accomplished while plagued by foul trouble late in Fort Worth, Texas, all the more extraordinary.

A familiar KU imperfection reared its ugly head late in the second half, as what was once a 12-point lead with 9 minutes to go completely disappeared by the 2:48 mark of regulation, with the Jayhawks gift-wrapping the Horned Frogs’ surge with 7 turnovers in a little more than 6 minutes.

“We knew the crowd was getting into it,” freshman point guard Devon Dotson said of what had all the trademarks of a devastating, outcome-swinging run for TCU, “and, you know, we made some silly mistakes, myself included. But we just wanted to stay together. We said all week, just keep trusting in one another and keep battling and everything will work out.”

Even down 4 with 2:07 left in regulation, this team, which prior to Monday had only won on the road this season by building a massive second-half lead at Baylor, found a way to crawl out of a self-dug hole during crunch time on an opponent’s court. Huge, must-have rebounds from Quentin Grimes and Dedric Lawson set the stage for clutch scores from both Lawson brothers, Dedric and K.J., to force overtime.

And even though KU got out in front by 5 midway through OT, the outcome wasn’t sealed until the breakout star of the night, Dotson, willed his team to a victory.

Attacking off a ball screen set by David McCormack (bigs Dedric Lawson and Mitch Lightfoot both already had fouled out), Dotson attacked the paint with Kansas up 1 in the final minute of the extra period. While drawing a foul en route to the hoop, Dotson landed on his backside, where he grimaced in pain, letting out a brief scream.

“I was kind of scared,” Ochai Agbaji shared of his initial reaction to seeing Dotson down on the floor with the game in the balance. “But I knew he has cramped, like, earlier in the season, before, but he’s played through it. He’s tough.”

Indeed, the pain Dotson felt from the fall was accompanied by some cramping, what with Dotson being the only player on either roster to take part in all 45 minutes of the conference battle.

The freshman point guard said Self told him in that moment, “You got it. Knock ’em down.”

And the point guard did just that, burying both free throws for a 3-point lead.

“I just wanted to get the win,” Dotson said. “Just lock in and take it one at a time, just knock it down.”

His desire to make that happen showed up two more times in OT, as Dotson finished 6 for 6 at the foul line in the final 40 seconds.

“That's a big momentum swing,” Dotson said of the pressure free throws that he considered a necessity while not allowing the moment to overwhelm him. “If they foul us and we miss those, that’s basically just giving them the ball.”

The resolve shown by Dotson and his teammates allowed Kansas (19-6 overall, 8-4 Big 12) to snap its four-game road losing skid and stay in the thick of the hunt for the Big 12 title. 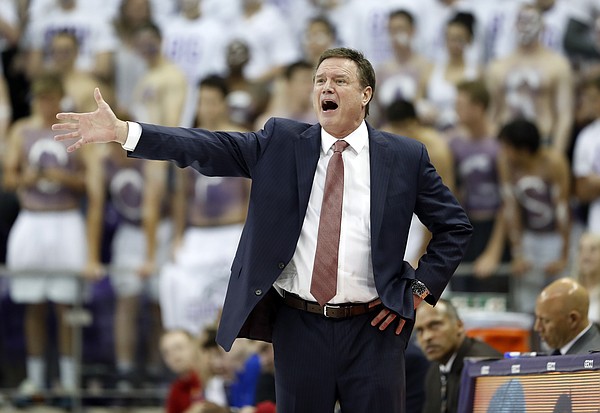 Kansas head coach Bill Self instructs his team in the first half of an NCAA college basketball game against TCU in Fort Worth, Texas, Monday, Feb. 11, 2019. (AP Photo/Tony Gutierrez)

So just how positive was Self feeling about the players’ toughness?

Even so, Self admitted KU had a “pretty makeshift lineup” on the floor after Dedric Lawson, Lightfoot and Grimes had fouled out: Dotson, Agbaji, Charlie Moore, McCormack and K.J. Lawson.

“And those guys hung in there,” Self said. “They did some good things.”

No one looked mentally tougher in the critical road victory than redshirt sophomore K.J. Lawson. The man was averaging only 9 minutes a game before circumstances allowed him to be on the floor in crunch time. And he wasn’t remotely scared of the spotlight, scoring the shot that forced OT in the final 30 seconds of the second half and putting Kansas ahead for good with another basket in the extra period.

K.J. said the Jayhawks’ second road win on the season has the potential to make them a mentally tougher team moving forward.

“That’s definitely like a motivational builder for the road,” he said. “When you win one on the road, you believe you can win one. But when you lose, you get a little doubt in your mind, when you’re coming down the stretch and you blew a couple games — any player will tell you that.”

Only six games remain for KU in the regular season, and half of them will be on the road: at Texas Tech, Oklahoma State and Oklahoma. Now that they’ve fought their way to a conference victory in an opposing arena, the Jayhawks have that experience to fall back on, that reminder that they are tough enough to endure the home team’s counterpunch and come out on the other side successfully.

If the Jayhawks end up clawing their way to another Big 12 championship by the end of the regular season, their overtime win at TCU will stand out as a defining turning point that made it possible, because it was on that Big Monday stage that the players proved to themselves that they have more tenacity about them than it once seemed.

I hate to say it but I watched the KSU-UT game last night. You want to see a clinic on how to operate late in the game, both offensively and defensively, KSU had it in spades. They were terrific. Three seniors and 2 juniors (I think) on the court and they just executed the crap out of UT.

I agree. They do play really well down the stretch because of their experience. I also come away from every close game of theirs I've watched thinking "they get away with A LOT of contact late in games." It's impossible to execute offensively when they are playing as hard as they do and allowed to be as physical as they play. Not taking anything away from them but just a thought I've had.

KSU knows how to play and how to win the close ones. They are tough mentally and physically. To defeat them you have to out-tough them. We have better players but they are more experienced.