Who's the best 3-point shooter for Kansas this season? 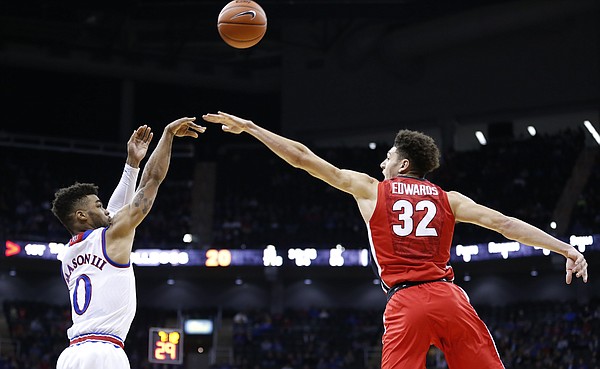 Kansas guard Frank Mason III (0) puts up a three from the corner over Georgia forward Mike Edwards (32) during the first half, Tuesday, Nov. 22, 2016 during the championship game of the CBE Classic at Sprint Center. by Nick Krug

A little less than three weeks into the season, the No. 4-ranked Kansas basketball team has shot just 35.5% from 3-point range. Dozens of games remain to be played and it’s a small sample size, but that rate of success marks a noticeable dip from last year, when the Jayhawks had more shooting threats on the roster and hit 41.8% from downtown.

As many likely expected, three KU players have emerged as the top long-range shooters for the 2016-17 campaign: senior Frank Mason III and juniors Devonté Graham and Svi Mykhailiuk — the three top returning shooters for a program that lost Wayne Selden Jr., Perry Ellis and Brannen Greene as outside options.

So who will emerge as the top marksman on the Jayhawks’ perimeter? Depends on whom you ask.

“Obviously everybody can shoot,” Mykhailiuk responded. “You know, last game Frank was five-for-five from three, 100 percent. Every game’s a different game and different guys hit shots.”

As the wing from Ukraine referenced, Mason couldn’t miss in the rout of UNC Asheville on Friday, improving his accuracy from beyond the arc to 48% thus far.

So is Mason the Jayhawks’ top sharpshooter? That Bill Self character probably has an opinion on the matter.

“Yeah, Frank’s shooting it really well,” Self said. “But you guys get so hung up on what happens in one game against North Carolina Asheville. I mean, in the big scheme of things that really doesn’t matter. I’d rather see what happens consistently over a seven- or 10-day period. And certainly I think we’ve got multiple guys capable of having big nights like Frank did the other night.”

OK, the head coach doesn’t want to single one guy out. So what does surging sophomore guard Lagerald Vick think? 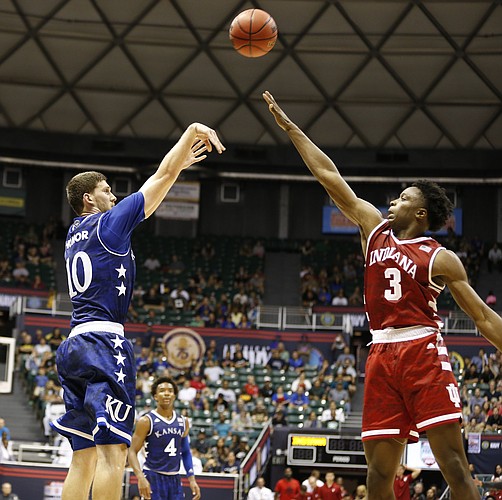 Kansas guard Sviatoslav Mykhailiuk (10) puts up a three from the corner over Indiana forward OG Anunoby (3) during the second half of the Armed Forces Classic at Stan Sheriff Center, on Friday, Nov. 11, 2016 in Honolulu, Hawaii. by Nick Krug

“Even on bad days he still is a good shooter,” Vick replied. “Coach always get on him when he’s not jumpin’ on his shot. You know he can make shots. I watch him shoot a lot. I get techniques from him. He’s definitely the best shooter on the team.”

As far as Self is concerned, any number of his players are capable of being considered the best 3-point shooter in crimson and blue. 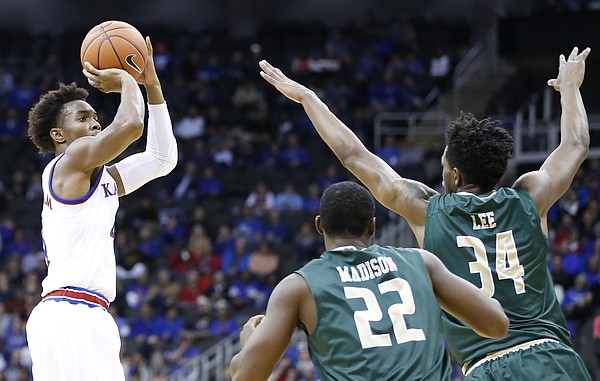 Kansas guard Devonte' Graham (4) pulls up for a three before UAB guard Tyler Madison (22) and UAB forward William Lee (34) during the first half of the CBE Classic on Monday, Nov. 21, 2016 at Sprint Center. by Nick Krug

“I would say if we were having a HORSE contest, I’d say Svi. But depending on game situations and things like that, then Frank’s pretty good,” Self added. “But Devonté’s good, too. I won’t quite put Lagerald (Vick) and Josh (Jackson) in that group, but I think they could become, at any particular game, could be our best shooter in the game.”

Vick and Jackson have only made seven 3-pointers between them this year, so they definitely can’t lay a claim to KU’s unofficial shooting crown.

Still, Vick considers joining that conversation one of his goals. He noticed upon reviewing game footage earlier this season a tendency to fade backward some on his jumpers. So Vick has made a point since to stay straight up and down when he rises up for a release.

“I’ve been stayin’ in the gym, just workin' on my jumpshot, lookin’ at the film and stuff,” Vick said, “so that should help me catch up with those guys.”

Personally, I’d cast my vote for Mykhailiuk as the best Jayhawk from deep. He shoots with the form Vick is trying to mimic and has that feathery touch on his release that convinces you the ball will fall through the net each time it leaves his hands. Plus, at 6-foot-8, he doesn’t have to always put so much of his body into his longest attempts.

What’s more, Mykhailiuk, who shot 37-for-92 (40.2%) while playing just 12.8 minutes a game as a sophomore, said he feels good about his shot and thinks he’s better this year.

“I think I’m more confident,” he said, “and I get more open looks.”

— Below is a look at how each of KU’s rotation guards has shot from 3-point range through six games.

Under pressure? Give it to Graham! No doubt! I still think Graham will earn the top spot 3pt shooter in this team. Wouldn't it be nice if all 5 of those guys can average 30-40% per game!

Was double-checking some of these stats just now and was surprised to find that in 149 minutes played so far this year Svi has only shot two free throws.

JJ is not a good set shooter, but if he dribbles it once or twice prior, he seems to be money from just about anywhere.

I agree that we should continue to give it to Frank or Devonte when the clock is winding down and we need do-or-die points.