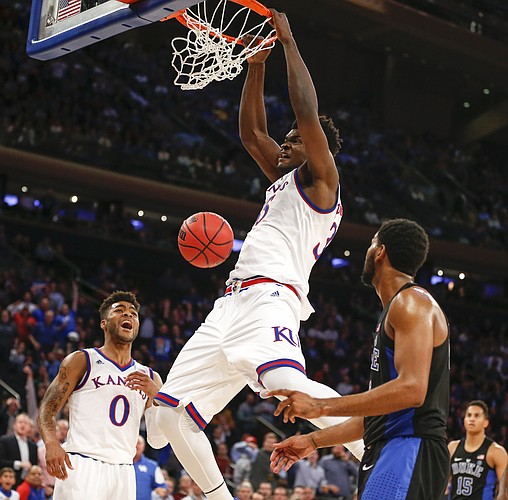 Kansas center Udoka Azubuike dunks against Duke during the second half of the Champions Classic on Tuesday, Nov. 15, 2016 at Madison Square Garden in New York. by Nick Krug

With the big fella slated to start his second consecutive game for the 5-1 Kansas men's basketball team, KU coach Bill Self has been fielding an increased number of questions about 7-foot center Udoka Azubuike during the past week or so.

But few questions have resulted in better answers than the one Self gave Monday when he was asked if Azubuike reminded him of anyone from the past.

“Shaq in the movie Blue Chips would be the only one," joked Self, with laughter filled the room around him. "You know, just dunk it. And if you go back and watch it, there’s a lot of similarities. But that would be the only thing that (Azubuike) reminds me of.”

That character from the 1994 movie starring Nick Nolte was named Neon Boudeaux. And like Azubuike, whenever Neon got anywhere near the rim, he rose up and tried to bring it down.

It was a bit hokey in terms of sports movie standards, but left nothing to the imagination about the impact of a player of Neon Boudeaux's caliber, which Shaq, of course, delivered on the NBA stage for the better part of nearly 20 NBA seasons.

Azubuike, of course, is just getting his career started. Still incredibly young (17) and raw, the Nigerian already has reached the point in his KU career where his improvement comes in bunches and shows up big time on the big stage. That's not to say he has moved past the point where he can make silly mistakes or forget an assignment here or there. But whether you're talking about conditioning, knowledge of the game or execution on the floor Azubuike is growing fast and Self continues to marvel at some of the things he can do.

“His skillset isn’t one that’s gonna leave you going crazy," Self said. "But what is unbelievable is how quick he is off his feet and how long he is and how big he is and how well he moves.”

Asked what Azubuike's ceiling could be during his time at Kansas, Self had no problem pencilling him in between two very concrete categories.

“He’s not Joel (Embiid)," said Self, almost offended that anyone might even consider thinking that. "Not close. But he does have a chance to be as good as any big man we’ve had here that I’ve coached other than Joel.” 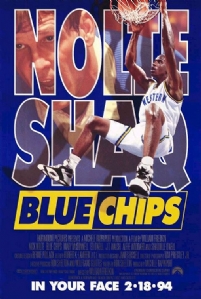 Udoka has improved at a nice rate for a freshman. He is getting better noticeably unlike Cheick who had his best game his first time out and never figured much of it out.

I can't quite fit Dok into a mold and don't have to. He's not Olajuwon like or Robert Parrish like. Nor is he a Moses Malone type. Not Chocolate Thunder or Tree Rollins. No Jack Sikma and no Wes Unseld. Nix to Bill and Wilt for sure. Patrick Ewing?

I'll go Nate Thurman, who had 45 boards in a game or Sam Bowie. I know it doesn't matter buts it's fun. Millions of forwards and guards but true centers narrow it down enough to make this "almost" inclusive.

Comparing Dok to Sam Bowie who was a completely different body type and player is way off. He has a skill set similar to Chocolate Thunder right now but could develop along the lines of a Moses Malone with more dunks.