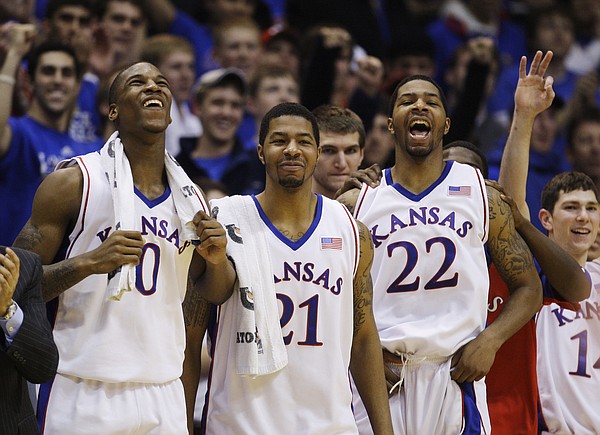 Former Kansas University players Thomas Robinson (0), Markieff Morris (21) and Marcus Morris (22) watch the action during a game against California in this file photo from Dec. 22, 2009 in Allen Fieldhouse.

What is this? Some Kansas basketball fanatic’s twisted NBA 2K dream?

Not exactly. Actually, this is the structure for team FOE, a potential entry in this summer’s The Basketball Tournament — better known as TBT.

The past couple of weeks, Markieff Morris has tweeted out links about his FOE venture, in need of support — via fans’ online votes — in order to qualify for the 64-team tourney, which begins in July.

While it would be entertaining to see the Morris twins and Robinson team up to and take on all comers in the tournament, they’re in the NBA, and that’s not a possibility. Instead, the former KU stars will have to watch from the sideline if they can drum up enough interest.

There is some good news for Kansas fans on that front, however. Of course the Morrii and Robinson have recruited a couple of their former teammates for the cause. On FOE’s team page, Mario Little is listed as the squad’s small forward and its shooting guard is Tyshawn Taylor.

According to a spokesperson with TBT, team FOE will need to get into the top 11 in fan voting in its designated region (Northeast) in order to receive an automatic berth. As of Thursday afternoon, the Morrii and company had a lot of ground to make up, as they were in 29th place.

Meanwhile, TeamDBD, featuring former one-and-done Kansas guard Josh Selby as both a general manager and point guard, is safely in the field in the South region.

So here’s your chance, Kansas fans. If FOE is going to play in this TBT it’s kind of up to you IMO. Visit the FOE page to vote for the former Jayhawks’ entry.

Who knows. Maybe FOE gets in and wins the whole thing. And, here’s where it gets really interesting: Fans of the tournament champions actually can win a cut of the prize money.

Even better, fans can vote for up to four teams. And each time you recruit someone else to vote for a team, you score a point.

It’s an intriguing setup, and just like those NCAA Tournament pools in March, can actually score you some cash, too. Happy voting.

This will be an interesting feature to watch how this comes out.

I'm an '07 Kansas grad currently located in Las Vegas, and I'm actually working out as meat squad for a team coming out of the Western Region. Appreciate anyone who can spare one of their four TBT votes for 7Outz: https://www.thetournament.com/teams/7outz?type=fan&f=56fef4b2706bf082906751