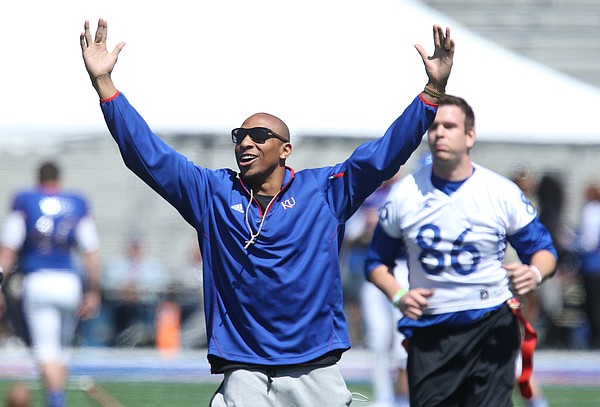 Denver Broncos cornerback and Kansas alum, Chris Harris Jr. celebrates after his team scored a touchdown during Alumni Game prior to the Spring Game on Saturday, April 9, 2016 at Memorial Stadium. Harris served as one of the coaches. by Nick Krug

In the midst of an interview with co-hosts Dan Le Batard and Bomani Jones, Harris offered his recollection of an infamous on-campus altercation between members of the KU basketball and football teams, back in 2009.

“Were you on the Kansas football team that lost the fight to the basketball Morris twins?” Le Batard asked.

Jones followed up: “We hear the other way.”

As reported by the Lawrence Journal-World at the time, the brawl left KU guard Tyshawn Taylor with a dislocated left thumb weeks before the start of the 2009-10 basketball season.

According to LeBetard, Marcus and Markieff Morris’ account of the incident includes them back-to-back, taking on football players “over someone who was on the track team.”

“Nah, man. I mean that story right there, I think it was over one of the little track girls, but, I mean, we had 300-pound dudes fighting these basketball guys, so they definitely didn’t win,” Harris said. “I definitely watched it and seen it with my own eyes. We definitely won that for sure. I love the Morris twins, though. Those my boys, though.”

Furthermore, Harris claimed there wasn’t really a football versus basketball dynamic at KU.

“We (the football team, coming off back-to-back bowl-win seasons) were actually pretty good at that time,” Harris said. “I guess you could say they were running the campus. We were, too.”

Reiterating his love for the Morris twins, Harris said he had to have his football teammates’ backs during the heated disagreement, before again laughing at the idea of a humongous defensive tackles in a melee against slighter basketball players.

“It’s not fair to fight a 6-foot point guard or 6-7, 6-9 power forward. I think we had a little advantage,” Harris recalled, wearing a grin.

Harris, who played with volatile cornerback Aqib Talib at Kansas and is teamed up with him again in Denver, also shared on ESPN one of his favorite Talib stories from back in the day.

“I was a true freshman, and I was starting opposite of Talib, who was an All-American. We were playing Missouri. They had their whole team on the 50-yard line, and Talib just like ran through their whole team,” Harris said. “And they were warming up, running plays, and he like, they had to get the cops to come drag him off there, off their side of the field for warmups, back in the tunnel. So I was like, ‘Man.’ That was one of the craziest times I’ve seen Talib right there.”

Watch the entire entertaining segment with Harris below:

None by Highly Questionable

Funny! Basically the basketball team are the alpha males on campus (just look at the current living quarters) and for a couple of years the football team where also alphas.

what kind of news is this? do you want to make it (fight between teams) a habit at KU? i feel really bad every time there's a brawl among teams living on the same campus. this is just sad.

Honestly, though, nobody won that fight. The football team soon after began a downward spiral from a 5-0 start to an 0-7 finish from which they have never recovered. The basketball team never really developed any appropriate chemistry and, despite a 30-win season, fizzled against Northern Iowa in the 2010 NCAA Round of 32.