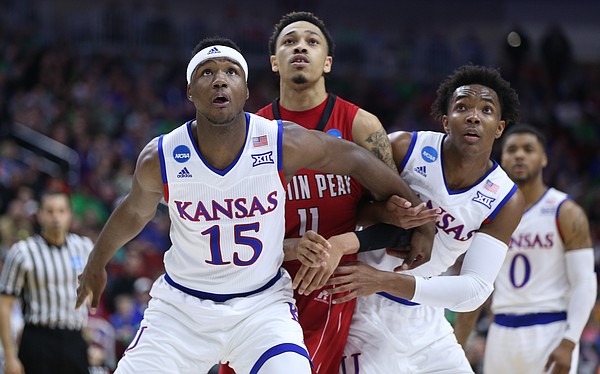 Still, even in limited bursts, the 6-foot-9 Bragg feels more capable now than ever before to contribute, as the Jayhawks remain in the hunt for the Final Four.

The young big man’s burgeoning assuredness made its first public appearance in Kansas City, Mo., at the Big 12 Tournament. Bragg, who had one double-digits scoring outing in his first 31 games in a KU uniform, put up 12 points against Kansas State in the quarterfinals, and 10 the next night versus Baylor in the semifinals — 22 total points in 21 combined minutes, off the bench.

The stage gets bigger and the pressure more intense every time Kansas (32-4) wins. But Bragg’s performances in his first conference tournament indicate the first-year forward is capable of delivering from here on out, even in a South regional semifinal Thursday against Maryland (27-8).

Bragg admitted he might not have been able to so readily contribute against high-level competition earlier in the season.

“I’m more confident now. I got more comfortable with the system, and coach puts more trust in me,” Bragg said. 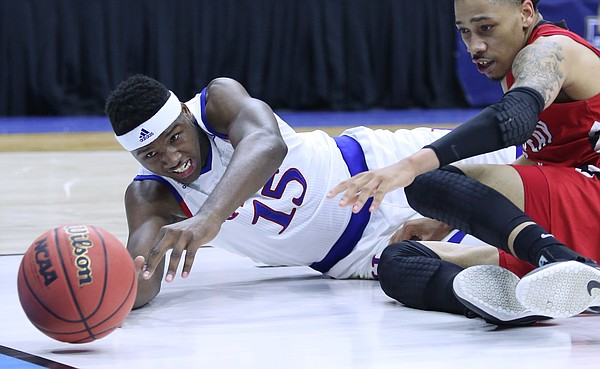 In the first two NCAA Tournament games of his career, Bragg only saw limited action off the bench — 9 minutes against Austin Peay, and 4 minutes against Connecticut — as Kansas advanced to the Sweet 16. But he took an active approach and showed he could make an impact on the offensive glass, with 3 rebounds of KU misses in his 13 total minutes in Des Moines. Bragg shot 2-for-3 in the first round (4 points) and 1-for-2 in the second (2 points).

Between put-backs, working on the baseline, jumpers from the elbows and even an occasional 3-pointer, Bragg’s offensive game has slowly grown throughout his freshman season, as he’s added wrinkles along the way. At the Big 12 Tournament, he even went by a defender after catching a pass at the free-throw line, and took the ball in for a layup.

KU sophomore point guard Devonté Graham and the rest of the Jayhawks couldn’t be happier to see Bragg (4.0 points, 2.4 rebounds in 8.9 minutes a game this season) make so many improvements.

“This is definitely the time for him to start doing stuff like that, because we’re gonna need a spark off the bench,” Graham said. “You know, one game maybe guys get in foul trouble or somebody’s not playing well. We’re gonna need that spark off the bench where he can come in. But he’s gotta stay out of foul trouble,” Graham added, with a chuckle.

Indeed, for all the enthusiasm and potential Bragg shows, fouls have been an issue lately. He fouled out after scoring his career high against K-State, and then got whistled for 4 fouls in both the Big 12 semis and championship game. Bragg had 3 more fouls against Austin Peay, then managed to avoid a penalty in 4 minutes against UConn. 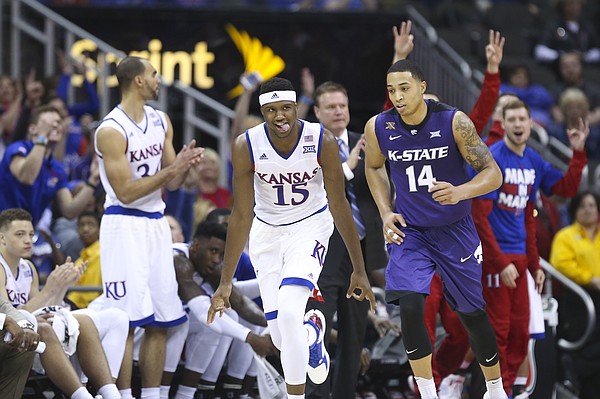 Kansas forward Carlton Bragg Jr. (15) wags his tongue next to Kansas State guard Justin Edwards (14) after hitting a three from the corner during the second half, Thursday, March 10, 2016 at Sprint Center in Kansas City, Mo. by Nick Krug

Still, Bragg’s potential and growth make him an intriguing X-factor every time Kansas plays. Particularly with his ability to stretch the floor with his shooting touch. Against K-State to open the Big 12 Tournament, Bragg hit a pair of 3-pointers, making him 4-for-7 from long range this season.

“Lately, especially in practice, he’s been knockin' them down,” Graham said of Bragg’s 3-point attempts, “and his confidence has gone up by showing it. I feel like, as a freshman, and playing his position, he got spot minutes, so he’d be kind of hesitant on taking that shot — thinking about maybe coming out and stuff like that. But lately he’s been knocking it down in practice, so coach has been giving him confidence and we’ve been giving him confidence and telling him to shoot the ball.”

Bragg said, much like in games, he doesn’t try to take a lot of 3-point shots at practices. Sure, he’ll let it fly when he’s open, but normally he just swings the ball on a perimeter touch and goes to set a screen.

That’s the perfect approach for a role player, and Bragg’s ability to embrace that also leads to his role expanding. Coaches and teammates now trust the energetic freshman to make smart choices within the offense.

For all of KU’s strengths, consistent front-court scoring off the bench hasn’t been one. Bragg would like to do his part in changing that, if possible.

“I think we could be really good and we could do a lot of damage and go deep into the tournament,” Bragg said. “You know, just in the couple minutes I play, just giving energy off the bench, it can come a long way.”

Armchair coaching here... if Bragg does those 4 things over the summer he can be any of the following things at any time in next year's games (provided he comes back):

a) A stretch 4 triple-threat capable of dribble-driving to the hoop, spotting up for a mid-range jumper, or draining the 3-ball. Very much a Perry-esque type

b) A mismatch at the 3 (maybe even the 2? i.e. guard of forward depending on personnel in the game) on offense AND defense

c) A long set of arms/legs to clog up passing and driving lanes, always awesome to have but especially potent in trap situations

Bragg has the perfect frame to fill a lot of roles depending on what the team needs at any given time. He just needs to add some more muscle to that frame and work on those things and he will be scary good. I'm super excited to see him in action next year.

Good ones, David. If I may add, learn how to get in front of everyone else fighting for rebound and know how to box out with his bottom pushing out. :)