Peeling Back The Shell: A quick, early look at the Maryland Terrapins 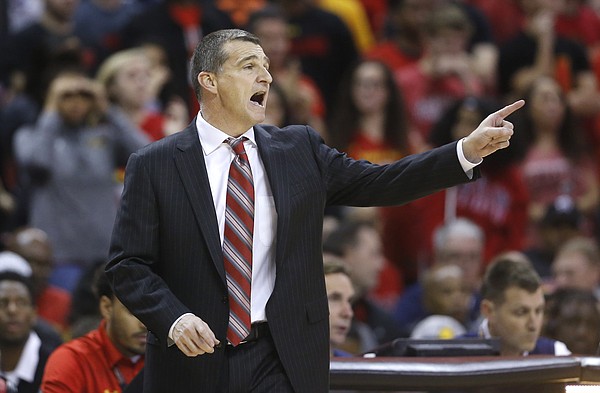 Now that we know which team top-seeded Kansas (32-4) will face in this year’s Sweet 16 this week in Louisville, it’s time to take a little closer look at the Maryland Terrapins.

As you all surely know by now, a terrapin is a turtle and this troop of tortoises is coached by former KU guard Mark Turgeon, who hails from Topeka and played at Kansas from 1984-87. Turgeon also served as a team captain.

Maryland, a No. 5 seed in the South region, enters Thursday’s showdown with the Jayhawks — slated for 8:40 p.m. central on CBS — with a 27-8 record and on the heels of first- and second-round victories over South Dakota State and Hawaii.

The Terrapins, who opened the season ranked No. 18 in The Associated Press’ preseason poll, spent all but two weeks after that ranked in the Top 10 before finishing the regular season right where they began the preseason — ranked No. 18.

Maryland reached as high as second in the AP poll for three different weeks — Weeks 3, 4 and 14 — and was in the Top 5 for nine weeks.

After reaching the No. 2 spot in Week 14 back on Feb. 8, Maryland lost five of eight down the stretch and watched a 22-3 mark turn into a 25-8 record heading into the Big Dance.

Four of those five teams made the tournament and two of them — Indiana and Wisconsin — joined Maryland in reaching the Sweet 16.

Despite the impressive sound of those defeats, you should remember that they all were losses and kenpom.com ranked Maryland’s schedule as the 47th toughest in college basketball this season.

KU and Maryland had two common opponents — Michigan State and UConn — and had similar results against both, with Maryland losing twice to Michigan State in tight games and KU losing to the Spartans 79-73 in the Champions Classic in November, and both beating Connecticut, Maryland 76-66 at home in December and KU 73-61 last week in Round 2 of the NCAA Tournament.

Now for a few basic quick facts and stats (KU’s numbers are in parentheses): 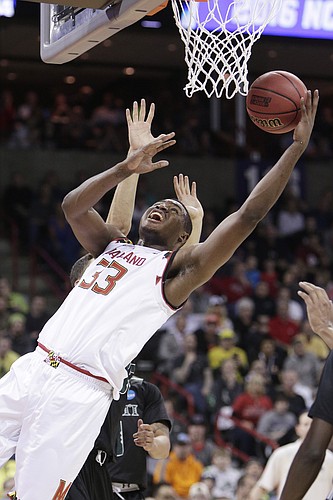 Maryland starts two seniors, a junior, a sophomore and a freshman, including senior forward Rasheed Sulaimon, a former Duke standout who transferred to Maryland following the 2014-15 season after being kicked off the team by Duke coach Mike Krzyzewski following a tumultuous couple of seasons with the Blue Devils.

We’ll have much, much more on Maryland and the match-up when we get to Louisville, so be sure to check out Kusports.com throughout the week for all kinds of stories, audio, videos, insight and analysis from KU’s first appearance in the Sweet 16 since 2013.

I saw Maryland twice, both against Michigan. Michigan played them close both times. One thing I noticed is Maryland could score whenever they wanted in the paint, but they continued to shoot from the outside.

True, so frustrating. Sulaimon, Layman, Carter, Nickens and Trimble are all very good 3-point shooters. Nickens got really cold during B1G play, but he can get very hot. Sulaimon can get really hot. Sometimes we can be unconscious from 3. Watch our first game against Ohio State this year. Don't let that 1 for 18 against Hawaii fool you. We will shoot 3's a lot better on Thursday. Trimble was shooting poorly during the middle part of the season because of a hamstring injury. He looks a lot better now.

It's the guards. It's keeping Melo (too much like Carmelo) off the foul line. He's 28/29 in 3 games. Scored over half his points at the line against Hawaii.

Melo free throws = terps win. Melo is 'annoying Duke player' good at getting to the free throw line. He knows how to draw cheap, bogus fouls on the other team. Shane Battier annoying levels. Watch the last ten seconds of the first half against Hawaii. In the backcourt Trimble dribbles over to Jankovic who is just running up the court not even trying guard Trimble. Trimble kinda runs into Jankovic, drawing a foul on Jankovic. It was pretty cheap. Trimble is smart. Trimble initiates the contact here.

Cut off the head, and the snake/tortuga will die.

They've got all kinds of depth in the front court, but next to nothing after Melo. Sulaimon while a quality back court player doesn't seem like he's much for initiating the O.

Wrong. Watch the Hawaii game. The Terps go on a run when Sulaimon is running point. All of the Terps fast breaks are led by Sulaimon. Melo slows things down too much. Sulaimon can get out of control at times, but makes the offense explosive. All Trimble does is draw fouls and shoot free throws. Go Terps!

Thanks for the insight. I got to watch their Purdue game, but haven't seen a lot else.

I can see your point if they are in transition, in which case positions aren't particularly significant. My thoughts were more directed at half court situations. There just isn't much in the way of guards after those 2.

When Melo has the ball 'in transition' does not exist. Suliamon could run point. He is good at driving and dishing to the bigs. No one can run the pick and roll as well as Trimble. Brantley is our PG of the future, but he hasn't shown anything this season. Just a freshman. Last year Trimble got kicked in the head and knocked out of our game against West Virginia in the second round. We fell apart after that. Hopefully that doesn't happen again. Rock, Chalk, beat them Jayhawks.

Sometimes Sulaimon looks like a better ball handler than Trimble. Sulaimon can get out of control, though. High energy guy. In the second half of our B1G tournament game against Nebraska Sulaimon had some filthy highlight reel moves:

actually, that was probably a double dribble. At the least a carry.

Sulaimon passes well in the transition game. In the half court offense, it's Melo who likes to drive and draw fouls.

This is all true. Melo doesn't do the transition game. He doesn't do fast breaks. I wish he would. Stone is good at running the court. If Melo ran a fast break here or there, Stone would get some transition dunks.

I like Selden guarding Melo, and Graham on Sulaimon. That'll take care of their heads.

That puts Frank on Carter or Layman. Those are match ups that would be badly abused.

Maryland was ranked third in the preseason AP and coaches poll, behind UNC and UK. KU was ranked lower than them. Am I missing something?

And they were pre-season Big 10 favorite.

Turgeon was a Larry Brown favorite for his relentless work ethic and attitude. His older brother, Jim, is head coach for the women's basketball team at Colorado State- Pueblo. Basketball in their blood.