Getting to know No. 13 TCU — and its explosive offense

Not that the Kansas football team had any control over the matter — or that better timing would’ve meant a KU win — but the winless Jayhawks probably couldn’t face TCU at a worse time.

Coach Gary Patterson’s team planned on contending a spot in the College Football Playoff entering this season, and even though a regular-season loss makes that more difficult, you can bet that’s still the prize TCU is after.

So the Horned Frogs, who also remember last season’s 34-30 win at KU being closer than they would’ve liked, will be locked in and ready to dispose of David Beaty’s Jayhawks (0-9, 0-6).

We’re all familiar with KU’s defensive struggles (see: allowing 58 points at Oklahoma State, 62 vs. Oklahoma and 59 at Texas during the past three weeks). Well, TCU could easily surpass those numbers.

TCU leads the nation with seven games of at least 600 yards of total offense, and the Horned Frogs are second nationally at 621.4 yards per game (Baylor leads the country at 665.6).

If TCU has any drop-off against Kansas, it might have to do with losing wide receiver Josh Doctson to a left wrist injury. Doctson had six straight games with at least 100 receiving yards and multiple touchdown catches.

That’s one less Horned Frog the Jayhawks have to worry about Saturday at Amon G. Carter Stadium. But TCU still has loads of talent, and players waiting to expose KU’s weaknesses. 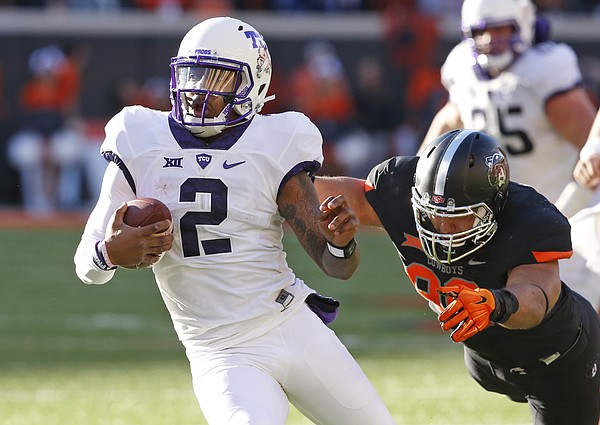 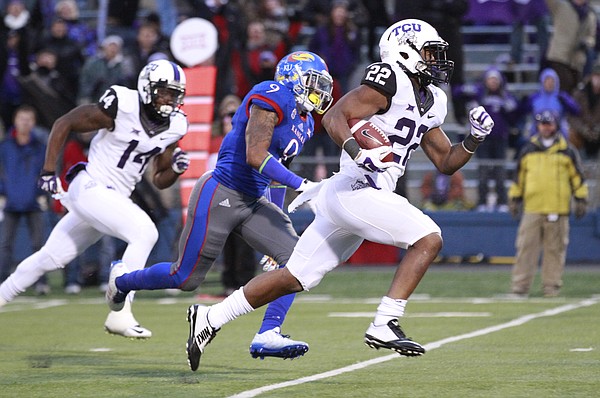 TCU running back Aaron Green races past Kansas safety Fish Smithson for a touchdown during the third quarter on Saturday, Nov. 15, 2014 at Memorial Stadium. by Nick Krug 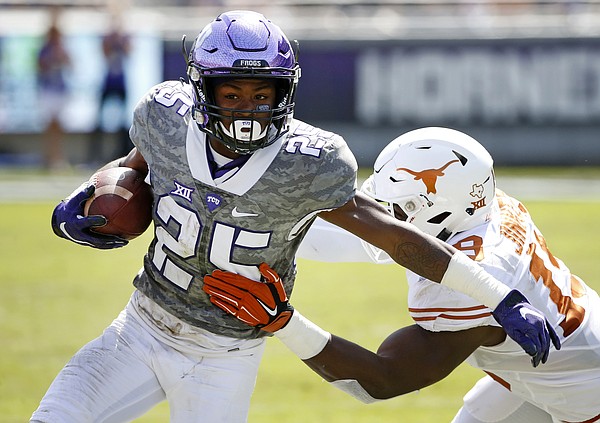 TCU wide receiver KaVontae Turpin (25) tries to get outside of Texas linebacker Peter Jinkens (19) in the second half of an NCAA football game Saturday, Oct. 3, 2015, in Fort Worth, Texas. (AP Photo/Ron Jenkins)

None by Max Faulkner

None by Brad Hardcastle

Two posts on today's football stories and they are both by me. Basketball season must have started.

Dang, Benton. You got this story on the opening night of basketball season with KU and this edition of our football team. I must say, appears it didn't stop you at putting your heart and soul into it. Much like the football team is trying to do, I think. Must be hard for those players and coaches to see what attention the basketball team garners and wish what might be for them in the future. We can only hope.