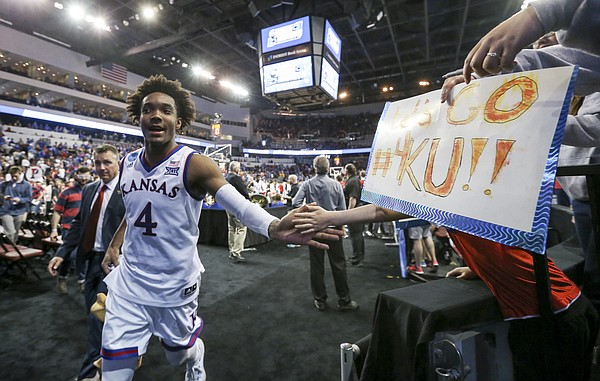 1 - Devonte Graham: Was spectacular defensively, shooting from outside, driving too hoop and hitting the boards in leading Kansas back from 21-11 deficit to six-point halftime lead. Scored 19 of his game-high 29 points in the first half. Also had six assists, just two turnovers and three steals.

2 - Lagerald Vick: Penn couldn’t stop him when he drove to the hoop. He should have done so more often, but still contributed 14 points, making 5 of 7 shots overall and 2 of 4 3-pointers. Also had two steals, but just two rebounds.

3 - Mitch Lightfoot: Shook a sluggish and scoreless first half to finish with nine points, 11 rebounds and three blocked shots.

4 - Svi Mykhailiuk: Made 2 of 3 3-pointers, but just 1 of 5 shots from inside the arc and had just two rebounds. Finished with 10 points, three assists, didn’t turn it over and had two blocked shots and two steals.

5 - Malik Newman: Missed both of his 3-point attempts but still was able to contribute 10 points and six rebounds.

6 - Marcus Garrett: When he makes a mistake he’s good at making up for it immediately. He threw a pass under the Penn hoop that was intercepted for an easy bucket. He responded with an aggressive drive to the hoop for a bucket. Had five rebounds and scored two points in 22 minutes.

8 - Udoka Azubuike: Check into game with 8:32 left in first half and ran the floor hard.

I figured KU would lead by 9 at the half and win by 15, stretching it out by making FTs. Didn't quite figure we'd be down by 10, but I was pretty close. I think we'll win by 12 against the Hall.

I thought Mitch's 11 rebounds were huge, he was all over the glass. If he can keep getting 10+ per game, we will do very well.