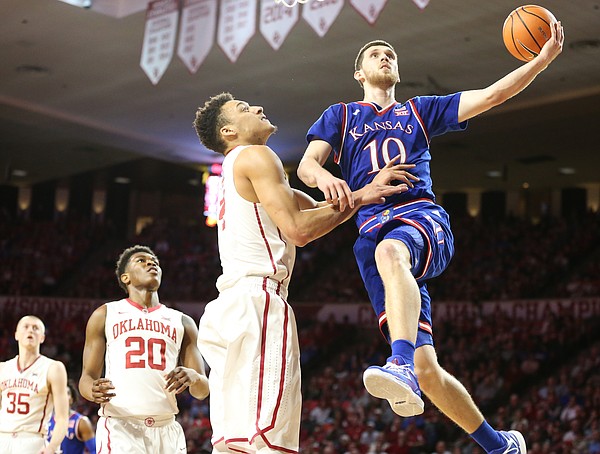 1 - Svi Mykhailiuk: Drove aggressively and made 6 of 13 3-pointers on way to team-high 24 points. Also contributed five rebounds and four assists.

2 - Malik Newman: Playing with far more confidence in the past two games, Newman made 7 of 12 shots, 3 of 5 3-pointers and all three free throws. Plus, he picked up four steals continued his steady work on the defensive boards, where he picked up four of his five rebounds.

3 - Devonte' Graham: Did a nice job of staying in front of Trae Young until midway through the second half. Repeatedly found teammates for open shots and finished with 11 points, seven rebounds and nine assists to go with just two turnovers. Other than a rough, rough shooting night (4 of 19, 1 of 9 from 3, 2 of 4 from the line), played well.

4 - Mitch Lightfoot: Played so well that in his 17 minutes Kansas had a seven-point advantage. Battled hard for eight points, five rebounds and two blocked shots.

5 - Udoka Azubuike: Foul trouble limited him to 22 minutes and free-throw woes limited him to nine points. The blueprint to stopping him from scoring never was followed so blatantly as when Lon Kruger instructed his players to foul every time down when the game dwindled inside four minutes. He missed all six free throws in the final 3:37. Kansas coach Bill Self said midseason is no time to change his free-throw technique, so it will be interesting to see whether Self removes him from the game late when the Jayhawks are in another close one. Self answered, “I don’t know,” when asked what he will do next time.

6 - Marcus Garrett: Was late with defensive help a couple of times, but generally played well and aggressively. Made 2 of 4 shots, didn’t attempt any 3-pointers (Yes!) and picked up four rebounds, two off the offensive glass, where he is sneakily effective.

7 - Lagerald Vick: Self ran a lob play for him coming out of a timeout early in the second half and Vick threw it down for his first points of the night. Missed all four 3-point attempts and in 30 minutes totaled just four points, two rebounds and one assist. When his aggressive play returns, and it will, he’ll give Kansas a big boost.

With Vick being such a non factor lately I really don't understand why Cunliffe isn't getting a chance, is he horrible in practice or what? I thought he contributed nicely in a couple games after he was eligible but can't get in the game now. Is there anybody out there that knows why coach won't play him?