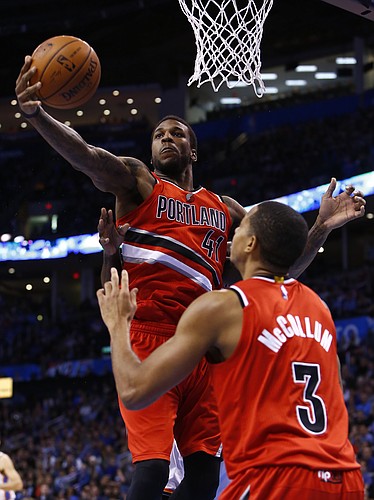 Believe it or not, sometimes life in the NBA isn’t easy. Especially if you’re a valuable asset when the league’s trade deadline approaches.

Just ask Washington’s journeyman power forward, Drew Gooden. Actually, BleacherReport.com did, given that the former Grizzly/Magic/Cavalier/Bull/King/Spur/Maverick/Clipper/Buck has played for 10 franchises and been traded on six separate occasions.

“I would say, where I’m at in my career, after numerous times going through a trade or the time or the window before a trade, I’m kind of numb to the feeling,” Gooden told Bleacher Report. “I know it’s a business, and I learned it early in my career. I wasn’t a guy who got drafted and stayed with his team for five, six, seven years and then got traded. I was a guy who played half a season in Memphis and got traded 50 games into the season.”

In his third go-round as a pro, Thomas Robinson hasn’t experienced all that Gooden has, but he can certainly relate. Drafted by Sacramento, traded to Houston as a rookie, then moved again to Portland before the start of his second year, Robinson could once again be on the move.

Robinson has turned in some positive moments in a Trail Blazers uniform this season, including a double-double in his first career start. For the most part, though, he has not been a factor or become a significant part of the rotation on a talented roster — Portland entered the All-Star break with a 36-17 record, good enough to tie Houston for the third-best mark in the volatile Western Conference.

Now, with Thursday afternoon’s trade deadline getting closer by the second, the rumor mill churns away at a fevered pace, and Robinson’s name has emerged. Yahoo’s Adrian Wojnarowski reports the Trail Blazers offered the athletic backup big to Denver in an attempt to land Wilson Chandler.

“Portland has shown a stronger desire to make a deal with Denver for Wilson Chandler than Arron Afflalo,” Wojnarowski wrote, “partly because Chandler is under contract next season. The Blazers have made Will Barton and Thomas Robinson, as well as a future first-rounder, available in talks for wing players, but clearly would be more motivated to sweeten a package for Chandler than Afflalo, league sources said.”

Whether Robinson ends up in Denver or elsewhere, don’t be too surprised if he has a new NBA home by Thursday night.

Keep in mind: just because some other deal hasn't been rumored doesn't mean there isn't one, and some other trade package could materialize in the next few hours. You never know.

As a free-agent-to-be, another uniform change could be just around the corner for Robinson anyway.

Would the Kings move McLemore? 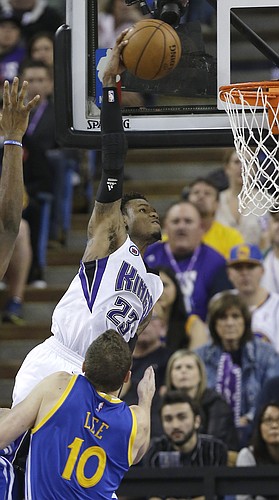 The Kings — one of the league’s worst teams, at 18-34 — wouldn’t possibly consider moving a a 22-year-old shooting guard with upside would they?

ESPN insider Chad Ford conducted an online chat Wednesday and came up with a scenario that could entice the Sacramento brass.

The name Goran Dragic swirls prominently in the trade winds these days, and the Phoenix point guard has made it plenty clear he wants out. Dragic reportedly wants to play for the Lakers, Knicks or Heat, presumably because he’d like to sign with one of those teams as a free agent this summer. But Ford could see Phoenix moving him within the Pacific Division for the right pieces in return:

“The Kings are the team I like best as far as fit goes. And if the Suns could get Ben McLemore or Nik Stauskas and a future No. 1 ... I think that would be a great deal for both sides,” Ford wrote.

This doesn’t even really qualify as a rumor, just speculation. However, Wojnarowski thinks Sacramento could be a serious contender to land Dragic. So stay tuned.

Yahoo Sources: Suns much more focused on discussing Dragic deals w/ Celtics, Rockets, Kings, among others, than any teams on guard's list.

A McLemore trade would be devastating news for the Kings’ television analyst, who would no longer be able to offer up such gems as:

The most interesting part of a McLemore-to-Phoenix move, of course, would be the Suns having him and the Morris twins.

According to veteran trade piece Gooden, it’s best to keep your phone handy near the deadline.

Life as a trade asset: Drew Gooden has been traded six times and has played for 10 teams in his 13-year NBA career. pic.twitter.com/gILXMsNjTj

None by NBA Bulletin

“I’ve been hearing some horror stories—which, thank God, never happened to me—about guys being in the airport, and they look at the ticker at the bottom of the screen and they see their name in a trade. There’s never a right way to tell somebody that they’ve been traded. Every place that I was at, I wanted to be there.”

If T-Rob gets traded, does he have to sign with the team that gets him, or can he sign with a team that wants him after the season is over?

TRob will be a free agent this summer whether he's traded or not.

Portland in October chose to decline their "team option" to extend him one more season on his rookie contract. Had they executed the team option they still could trade him, but he wouldn't be a free agent until the summer of 2016. So whomever they traded him to would have had to be willing to keep him for next season.

Since TRob's contract is expiring this year, teams will be more likely to accept him in a trade, because they essentially get a two month trial period (3 mo if a playoff team) to determine whether they want to offer him a free agent deal or let him go. If they do decide to not offer him a long term deal, then at least they didn't have to give up much to trade for him because his value is low. Whereas, a player like Goran Dragic who also has an expiring contract teams are more hesitant to trade for, because they will have to give up considerable assets in a trade, without the guarantee that he'll agree to a free agent deal this summer. Essentially they run the risk of trading away a bunch of value and then not even getting to keep Dragic.

T-Rob is going to be big for someone. As for Mac, I have watched him a lot on TV this year. He is no Andrew Wiggins. Looks like he does a lot of standing around and is not very aggressive.

If the Kings had an offensive game plan, Mac could do more than stand around.