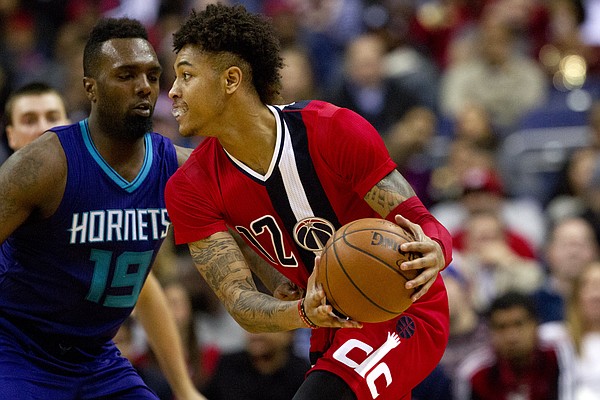 Washington Wizards forward Kelly Oubre Jr. (12), handles the ball against Charlotte Hornets forward P.J. Hairston (19), in the first half of an NBA basketball game at the Verizon Center in Washington on Saturday, Dec. 19, 2015. This was Oubre's first game as a starter. The Wizards won 109-101. (AP Photo/Jacquelyn Martin)

Twenty-year-old rookie Kelly Oubre Jr. didn’t figure into Washington’s plans when the season began. The Wizards hoped to bring the 6-foot-7 forward out of Kansas along slowly and develop him away from the spotlight of actual NBA games.

That idea got altered — at least temporarily — when the Wizards lost their starting small forward to an injury last week, and Oubre earned an unexpected shot to try and prove he belongs ahead of schedule.

Averaging just 9.3 minutes and 4.0 points on the season (with 7 DNP-CD’s), Oubre played more than 20 minutes in each of Washington’s past two games and started for the first time in his career due to Otto Porter’s left thigh bruise.

Against Charlotte on Saturday, Oubre made both of his 3-pointers, shot 3-for-5 overall, scored 8 points and had 5 rebounds in his first outing as an NBA starter. He played just 22 minutes after picking up his second foul a little more than 6 minutes in.

Afterward, Oubre told The Washington Post he tried to ease into his new role.

“I was just trying to play within the confines of the offense, the flow,” Oubre said. “Letting it come to me, not forcing anything.”

“I kind of know the standard of what I need to do to be successful in the NBA game,” Oubre added. “I watched film off that and continue to build off that. So I feel like it’s something that I can continue to grow up upon.”

According to CSN Mid-Atlantic, Oubre is expected to get start No. 2 Monday night against Sacramento.

Referencing his 4 fouls in his first start, Oubre said:

In the meantime, the rookie, who earlier this season learned a valuable lesson about NBA decorum when the league fined him $15,000 for an obscene gesture he made on the bench, will continue to try and pick and choose his spots and figure out how he can impact the game for the disappointing Wizards (11-14).

"Until I'm established and I know what it is I'm giving every night, then I'll try to do more," Oubre said. "I'm just trying to play within the confines of the offense, trying to do what I need to do to stay on the court."

Kelly hit 2 threes last night in the Wizards win over Sacremento! Washington's bench is so depleted with injuries and this is a great opportunity for him to show his potential and gain the confidence of John Wall and other teammates.