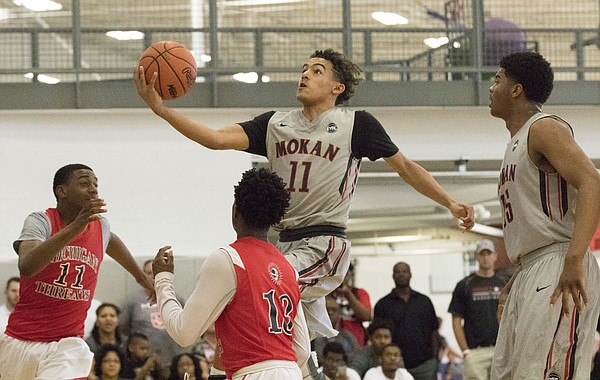 Kansas basketball recruit Trae Young (11) weaves his way though traffic as he drives to the hoop during AAU competition Saturday afternoon at Lawrence Sports Pavilion. by John Young

It’s only a few more days until Trae Young, one of the top-ranked point guards in the country, announces to the world where he will play in college.

But for those who want to see how top-level recruits go through their thought process, Young gave a behind the scenes peek to Jason Jordan and USA Today when he sat with his parents, Ray and Candice, to discuss the pros and cons of his list of finalists in a family roundtable meeting. Young is expected to announce his decision Thursday in a ceremony at his high school.

After going through his final-six list: Washington, Texas Tech, Kentucky, Oklahoma State, Oklahoma and Kansas, Young narrowed down his finalists to his two in-state schools and the Jayhawks.

When Young went through his pros and cons of each team, he appeared to have a focus on finding a coach that can push him into the NBA, a team that played uptempo and playing for a school that can make a run in the NCAA Tournament. Young, a 6-foot-2, 170-pound guard from Norman, Okla., is averaging 43 points per game at Norman North.

During the family discussion about Kansas, Young notes Self is his favorite coach and how much he enjoyed the atmosphere on his visits.

However, he does have some concerns about point guards under Self playing in the NBA.

“Well, how many point guards has Coach Self gotten to the NBA?” Trae asks, seemingly rhetorically.

“Besides them,” Trae says. “He always talks about Sherron Collins, but I’m not sure what he does. But he was a five-star from a blue blood school … Then Josh Selby … I just feel like Coach Self’s thing is developing people.”

When Jordan wrote about the conversations on other schools, the same NBA concern persisted for most teams. Ray Young commented that Devonte Graham could return to play point guard next season, which would help his NBA stock, or Malik Newman could try to do the same.

“I feel you, it’s a little scary because you want people’s roles to be clear and, more importantly, for them to accept them,” Ray adds. “But I go back to what Coach Self told you, he said, ‘What else do I need to tell you, Trae? You’re gonna be the starting point guard for Kansas University. You’re gonna be Frank Mason.’”

“Yeah, Frank is ballin’!” Trae says. “Coach Self asked me, ‘How is this a hard decision?’ You can’t not be attracted to that situation. That’s, like, impossible.’”

The Jayhawks even picked up an endorsement from a former Big 12 opponent: Cleveland Cavaliers coach Tyronn Lue, who is good friends with Young’s father. Young met with the team, and Cavs point guard Kyrie Irving, after Cleveland played the Thunder on Feb. 9.

“Coach Self lets his guards rock,” said Lue, who played at Nebraska. “He let’s ’em go. I’m telling you!”

But even with positive comments for the Jayhawks, there were still plenty of positives for Oklahoma and Oklahoma State.

Jordan writes of the Oklahoma conversation:

“He said he’d turn over the keys to the program to me not when the season started,” Trae says. “But on June 1. I liked that.”

“OK, let’s be honest,” Ray says, obviously less impressed. “Coach Kruger has been on Trae since the eighth grade; from then until Trae did what he did in the EYBL and everything like that, how many times did he talk about Trae going to the league? That scares me; I think Kruger can do it, it just scares me.”

“I’m not worried about developing under him,” Trae counters. “I look at what he’s done with other players and developing isn’t a con for me.”

And of Oklahoma State, which Young enjoys how Juwan Evans is utilized:

“Coach (Brad) Underwood really lets him play,” Trae says. “They’re winning and they’re one of the best teams in the Big 12 this year. I really like them.”

“Yeah me, too,” adds Ray. “I loved their fans; they were really supportive and they knew all about you. I think Coach Lamont (Evans) has done a great job with you, too! What about cons?”

“You’ve gotta come back to me on that,” Trae says. “Well, actually Coach Underwood got in a little late after they fired Coach (Travis) Ford, and they also don’t play Jawun as much as the other starting point guards in the Big 12.”

It’s easy to see the pressure and thought process, through Jordan’s all-access story, of how recruiting looks for five-star prospects. Read more from Jordan before Young announces his pick Thursday: http://usatodayhss.com/2017/all-access-all-usa-trae-young-basketball-recruiting-roundtable.

The full USA today article is worth reading.

He can come in and start day 1, is there any question where to go??? Not like it is Duke or North Carolina as alternatives. RCJH

I'm worried on this... The whole PG in the NBA thing sounds bad, IMO. Too focused on the NBA already. I'm guessing he goes to OU

Well Ryan you have a 50% chance to be correct. It appears OSU might just be on the list.Either KU or OU. Looks like Mom likes OU I would pick KU after reading the story. Mainly because of his wanting a coach to develop for the pros.

If he wants big time TV exposure in addition to the development, the camaraderie, the fans, etc., Kansas is the obvious choice. He can shine at any school. He could be in the national spotlight at Kansas. Besides, we have Hudy!

After reading the article, I feel a little better about KU's chances. What is interesting is that Trae says he wouldn't mind the competition, but in the past that has driven some away. With his decision coming this week, will the thought of Devonte and Newman scare him away since we won't know if Devonte really is gone?

Cons: Self may expose your weaknesses and then you'll realize you're not that great of a player. This can also be a pro because Self brings the best out in players and exposes their weaknesses to make them strengths. But a player that's full of himself may not appreciate or progress as their ego is already so big.

On Sherron and Selby not making it in the NBA... I don't see how you can place any of that on Self. Sherron had every chance in the world to make a place for himself in the L, even quite a few stand-out performances is the D-League on his resume, but either due to really unfortunate metabolism or poor self discipline, he couldn't stay in shape and keep his weight down. Selby's fate was due to jumping early and lack of coachability, imo.

If Young wants to be in the NBA that badly, then KU should be his choice. With Graham, Newman, Vick and Mykailiuk, he will be pushed to improve every day. Averaging 42 points a game will not impress the NBA. Leading Kansas deep into March will.