Regents approve policy that will require KU, other state universities to get new approvals to change athletic conferences 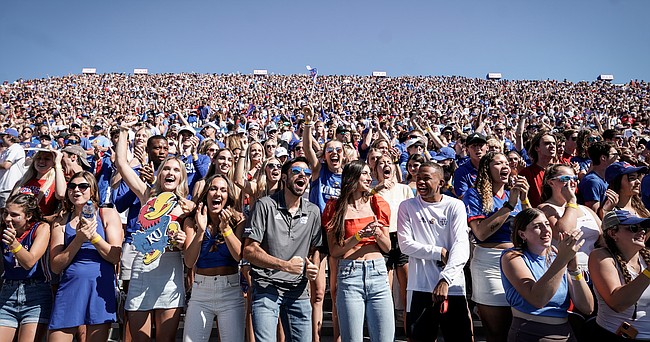 A sea of Kansas students erupts during the first quarter on Saturday, Oct. 1, 2022 at Memorial Stadium.

If the University of Kansas ever decides it wants to change athletic conferences, it will have to win some state approvals that aren’t required today.

Members of the Kansas Board of Regents on Wednesday unanimously approved a policy that will require any Regents university — KU, K-State, Wichita State, Fort Hays State, Pittsburg State and Emporia State — to get approvals from at least three non-university officials before moving to a new athletic conference.

The new policy comes on the heels of major conference realignment, which has sparked discussion about whether KU may need to move from the Big 12 Conference to protect its athletic programs.

The board’s previous policy — in place since 2020, shortly after Wichita State changed conferences — required the board chair and the president/CEO of the Regents to grant approval to begin negotiations about any potential change in conferences. It did not require approval from any Regents official to actually change conferences. The new policy, for the first time, also gives a role to the vice chair of the Regents in the approval process.

Regents Chair Jon Rolph on Wednesday said it was important that new policy specifies that university officials must get Regents approval before even beginning discussions about a conference change. The old policy theoretically allowed discussions to happen without Regents knowledge, as long as those discussions didn’t turn into negotiations. Where that line begins and ends has been murky. Regents President and CEO Blake Flanders previously has said, under the new policy, he now expects to be notified of any communication a university leader has regarding a change in conferences.

Rolph previously has said the Regents want to have more involvement and more information in potential conference changes, in part, to avoid controversies like the one involving UCLA and its pending move to the Big Ten Conference. Leaders in California have complained that Regents were not adequately notified of the pending change, and now there are concerns that UCLA’s move to the Big Ten will hurt the University of California-Berkeley by leaving that school in a potentially financially weakened Pac 12 Conference.

Regents in California this week reportedly are considering taking action to block UCLA’s move to the Big Ten. Kansas officials don’t want to find themselves in that situation. However, the new policy stops short of requiring the entire Kansas Board of Regents to vote on any athletic conference change.

However, Regent Wint Winter Jr., a Lawrence attorney, clarified at Wednesday’s meeting that a Regent could request that the issue of an athletic conference move be brought before the entire Board of Regents for action. Rolph, the Regents’ chair, said it could be brought before the full board under the board’s current rules. Any Regent can make a motion to add an item to the board’s agenda.

Under that scenario, though, Regents would have to be made aware that a university was considering a move. Under the new policy, the three designated Regents officials are required to give their approval to a conference move, but the policy doesn’t require any of those three Regents officials to communicate to the other Regents that such a move is in the works. Winter said he was confident the current group of leaders would communicate the issue to other Regents, but he noted the policy doesn’t bind future leaders to do so.

Under the new policy, Rolph, Flanders and Carl Ice, the Regents’ vice chair, who also is a leader of the Kansas State University Foundation, would be the three people required to grant approval for a conference change in this academic year. Flanders is an employee of the Regents who serves as president and CEO year after year. The chair and vice chair position will be filled by other Regents in future years.

Complete B.S. Fruit of a poisonous trees planted by the worst governor in the history of any state, country, province or territory in history. Just trying to hamstring KU if we get the call. Everything about it is absolutely wrong.

Of the three mentioned Regents, one is a Baylor alum, the other two both are KSU alums. But we can expect their "vote" would be totally unbiased, right???? Geez.

Another step backwards for the state.

Unbelievable. Hamstring / limit choices for Kansas while every other highly desirable university in the country, heretofore, has much more flexibility. Can't even hear discussions by the university to do what could be in its own (school's and fans') best interest.

Sounds like the regents have a major conflict of interest.