By Jack McGarr, Special to the Journal-World 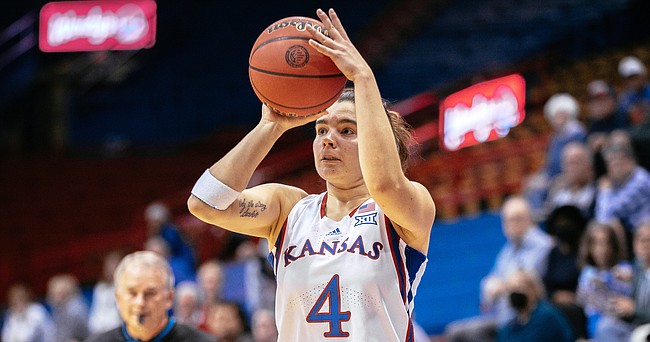 Kansas junior Mia Vuksic lets a 3-pointer fly during the Jayhawks' game against UT-Arlington on Wednesday, Nov. 16, 2022, at Allen Fieldhouse.

Prater found a spot in KU's starting lineup, replacing injured junior forward Ioanna Chatzileonti. Prater made an immediate impact for the Jayhawks with her tenacious defense, recording four blocks in the first five minutes of action. Her energy continued throughout the quarter as she powered through for an and-one layup to pick up her third and fourth points of the period. 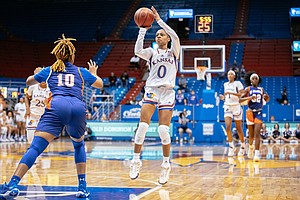 KU's Wyvette Mayberry pulls up for a jumper during the Jayhawks' game against UT-Arlington on Wednesday, Nov. 16, 2022, at Allen Fieldhouse.

“I love defense. I feel like that’s my role on this team: to be a lockdown defender,” Prater said. “And every night, no matter who it is I’m guarding, I just know my team needs me to play hard on defense every possession. I love it.”

Senior center Taiyanna Jackson also made her presence felt, as she does on a nightly basis, with a near double-double in the first half. Jackson totaled 11 points and eight rebounds in just 17 first-half minutes.

Jackson made some personal history in this game, scoring her 300th career point at Kansas after bulldozing through the paint for an-and-one layup with 3:50 to go in the second quarter, flexing her muscles to her teammates after the bucket. Jackson also recorded her 100th block with the Jayhawks after swatting away a layup attempt with 5:05 remaining in the third quarter.

“We’re proud of Twin [Jackson]. I think she’s got the potential to be one of the more elite defenders in the country, and I think she’s shown, going 4-for-5 in the first half and 6-for-9, that her offensive skillset has improved,” KU coach Brandon Schneider said. “We’ve got to do a better job of getting her more shots, though.” 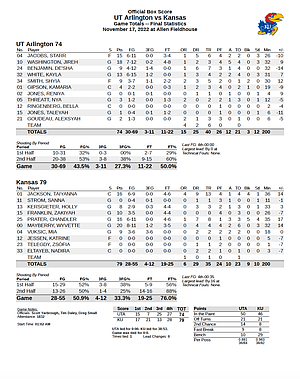 Despite KU’s first-half success, UT-Arlington put the pressure on the Jayhawks, forcing a lot of turnovers and sloppy ball handling. KU had 12 turnovers, with six of those being steals for the Lady Mavericks, and these turnovers proved costly for Kansas.

UTA managed to stay in the game with its defensive pressure, making the most off of Kansas’ turnovers and miscues. The Lady Mavericks scored 12 of their 22 total first-half points off of turnovers as they headed into halftime with a 16-point deficit.

The Lady Mavericks came out swinging to start the second half, immediately going on an 11-2 scoring run thanks to their full-court pressure. Kansas responded, bringing its lead back to 13 points before UTA made its comeback attempt.

UT-Arlington answered back with its own 10-0 scoring run, spanning just 1:15 of play, and the Lady Mavericks cut the deficit to just two points.

“I thought we were really passive early, and then we got more aggressive trying to get the ball up the court quicker to the middle to create some numbers, which we did effectively enough to maybe get them out of the press,” Schneider said.

KU’s lead started to waver, and Prater and Mayberry made sure to keep the pressure on UTA and secure the win for the Jayhawks. Prater showed her aggressiveness in her drives to the basket and her tenacity on the glass, racking up five points, three rebounds and a steal in the final period.

In a back-and-forth fourth quarter, Mayberry showed up when it counted, scoring 11 of her game-high 20 points. This pushed the lead to seven points with just 17.7 seconds remaining, ultimately putting the Lady Mavericks away late and pushing Kansas’ record to 2-0.

“Everybody knows Wy [Mayberry] is a good player. Seeing her play over the summer, seeing her practice, I just couldn’t wait for her to show everybody what she’s got,” Prater said. “I feel like, as her teammates, we’re just happy to see her find her stride.”

Up next, Kansas hosts UTRGV on Sunday at 2 p.m. as the Jayhawks continue their nonconference schedule.

Congratulations, Jayhawks! Great that we got the win without Ioanna, and great that we got those huge contributions from Jackson, Mayberry and Prater. And, hopefully that was a one-off down performance from Kersgieter, because the team won't achieve up to their expectations without her playing well (Brandon Schneider's postgame comments were pretty harsh).