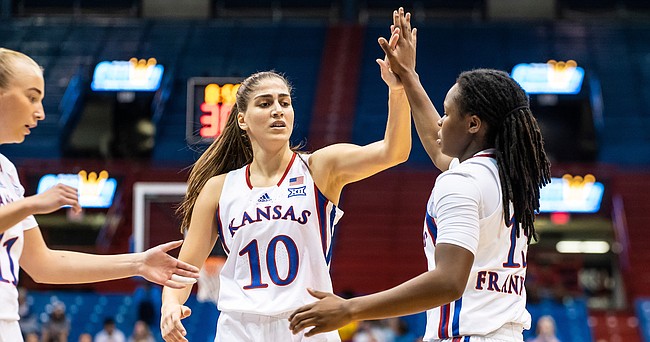 KU's Ionna Chatzileonti high-fives Zakiyah Franklin during a game between KU and Jacksonville on Wednesday, Nov. 9, 2022 at Allen Fieldhouse.

The Kansas women’s basketball team’s veteran backcourt of Zakiyah Franklin and Holly Kersgieter picked up right where they left off last season, delivering when it counted, to help push KU past Jacksonville, 72-61, in a closer-than-hoped-for season opener on Wednesday night.

Senior center Taiyanna Jackson joined them in pouring in 16 points and grabbing 12 rebounds in the win at Allen Fieldhouse.

While Jackson, who also blocked two shots, was pretty steady throughout, KU needed Franklin and Kersgieter to be great late and both players answered the call.

“It’s great having them on my team,” Jackson said of Franklin and Kersgieter. “Because they can score whenever they want. Literally. I love it.” 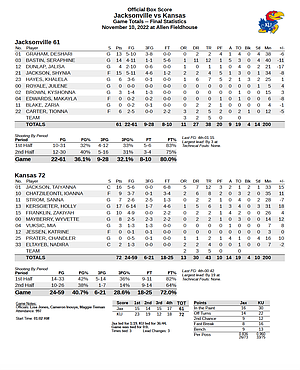 Kersgieter led Kansas with 17 points on 6-of-14 shooting and also added six rebounds. Franklin chipped in with 10 points and four assists, with half of both coming in the final quarter.

The Jayahwks (1-0) led by eight after one quarter, by 13 at halftime and by 10 entering the final period. But the athletic Dolphins never went away.

With Kansas holding onto a lead between 8-12 points for much of the end of the third quarter, Jacksonville (1-1) trimmed the KU lead to five just one minute into the fourth quarter.

Kansas coach Brandon Schneider responded by putting veteran Kersgieter and Franklin back into the game and the move immediately paid off. On the very next possession, Franklin found Kersgieter on the wing and the junior who earned preseason all-Big 12 honors drilled her first 3-pointer of the night. It came after she missed her first four.

That put Kansas ahead 57-49, but Kersgieter wasn’t done. On KU’s first defensive possession after she checked back in, Kersgieter swiped a steal and launched the ball the length of the court to a sprinting Taiyanna Jackson, who was fouled on her way to the basket. Jackson made one of two free throws to put the Jayhawks up 58-49.

On the next defensive trip for Kansas, Franklin wrestled away a loose ball after a Jacksonville miss and threw it ahead to a streaking Kersgieter, who laid it in to push the KU lead back to double figures.

That sequence, which also featured a tough, and-one finish by Franklin after the Dolphins had trimmed the Kansas lead all the way to four, helped calm Kansas on a night when the Jayhawks showed a little first-game rust and shot just 40.7% from the floor.

“I wanted to have them fresh for the stretch run,” Schneider said. “I didn’t want them to have to play the whole fourth quarter. I have a lot of confidence in them, regardless of how their entire night went.”

Wednesday’s victory also marked the debut of one of the program’s newest weapons.

Tulsa transfer Wyvette Mayberry, who was one of KU’s two primary ball handlers on the night, sparked the Jayhawks midway through the game with a stretch of hot outside shooting.

Mayberry scored eight of KU’s 10 points in a second-quarter run that pushed the Jayhawks’ lead from 23-17 to 33-19. The 5-foot-7 junior finished the night with eight points on 2-of-5 shooting, including two 3-pointers. Schneider said his newest guard would be one of the Jayhawks’ top 3-point shooters this season. And Jackson, who is roommates with Mayberry, said she provides much more than that for the KU lineup.

“She did good,” Jackson said. “She just has to get comfortable playing with a new team, in a new gym and new conference. She brings speed, she can shoot the 3 and she can play defense.”

Both Schneider and the Kansas players said they were encouraged by many aspects of Wednesday’s victory, not the least of which was finally playing in the first place.

“It’s just fun playing somebody else other than your teammates,” Jackson said.

Added Mayberry: “I’m just glad we got this first game under our belt.”

From Schneider’s perspective, Wednesday’s victory was good because it was not one he’s sure this team — or past teams — would have had the composure to win before.

“It’s exactly what we needed and we knew that was going to be the case,” Schneider said of the tough challenge. “I thought it was great for us to have a game that we can learn a lot from, really have one guy play well at all and win.”

Next up, KU will play host to UT-Arlington at 7 p.m. on Nov. 16 at Allen Fieldhouse.

Congratulations to the women for the win! It seems clear to me that when this team puts it all together, they're going to be scary good.

I hope you are right. They did not play all that good last night and Kersgieter missed a lot of shots she usually makes. 90% of the 50/50 balls went to Jacksonville. Mayberry and Strom looked good. It was a pretty rugged first game of the season and I trust not indicative of who they will become.