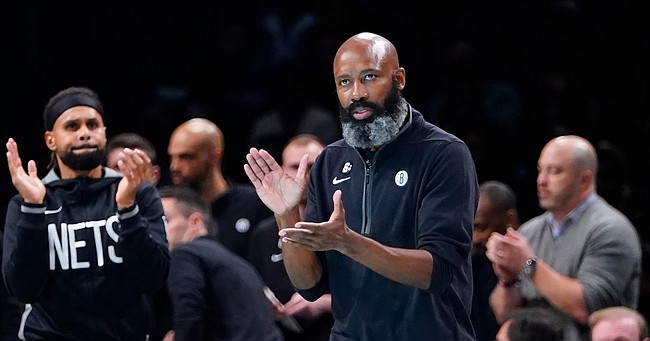 Brooklyn Nets head coach Jacque Vaughn claps for his team during the first half of an NBA basketball game against the New York Knicks, Wednesday, Nov. 9, 2022, in New York. (AP Photo/Frank Franklin II)

Vaughn has gone 2-2 as acting coach since the Nets and Nash parted ways on Nov. 1. His first game as the head coach will be Wednesday night at home against the New York Knicks.

“Jacque’s basketball acumen, competitiveness and intimate knowledge of our team and organization make him the clear-cut best person to lead our group moving forward,” general manager Sean Marks said in a statement. “He has a proven ability to get the best out of our players, hold them accountable and play a cohesive, team-first style of basketball.”

After moving on from Nash, the Nets had discussions with Udoka, who along with Vaughn had been a Nets assistant before taking the Boston job. He led the Celtics to last season’s NBA Finals but was suspended for at least this season for violating team rules by having a relationship with a female staffer within the organization.

But the Nets decided not to go that route, perhaps unwilling to take on more negative attention while dealing with the fallout from Kyrie Irving’s decision to post a link to a film with antisemitic material on his Twitter page.

Irving will serve the fourth game of what will be at least a five-game suspension without pay on Wednesday that the team gave him for refusing to say he had no antisemitic beliefs.

Vaughn is in his seventh season as a Nets assistant. He replaced Kenny Atkinson on an interim basis in March 2020, just before the season was suspended because of the coronavirus pandemic, and coached Brooklyn during the season restart in Walt Disney World.

Vaughn went 7-3 in 10 games and led the Nets to the first round of the playoffs, even though they were without the injured Kevin Durant and Irving, as well as other key players who didn’t join them for the restart.

The Nets then hired Nash, even though he had no coaching experience, and kept Vaughn as an assistant. Nash led Brooklyn to the playoffs in each of his two full seasons, but the team made a change after getting off to a 2-5 start.

Marks said that move was made because the Nets weren’t playing up to their expectations, but they have shown improvement under Vaughn. After losing at home to Chicago in the first game, Brooklyn won road games in Washington and Charlotte on back-to-back nights before a 96-94 loss in Dallas on Monday.

You know, except for the gray beard, he looks pretty much the same as when he played for KU.....

Good luck and he will need it. Jacque Vaughn inherits a dysfunctional team lead by the controversial Kyrie Irving and the arguably the most overpaid player in the NBA, Ben Simmons ($35,448,672) who my 76ers with Joel Embiid unloaded a season ago for a reason. Simmons, a point guard, in his career is a 14.3% shooter from 3 and makes only 59.6% of free throws. Good job if you can get it. The Nets roster is not great but includes the aging Kevin Durant ($44,119,845) and former Jayhawk, Markieff Morris ($1,836,090). If Vaughn, who made a total of $11,259,690 in his 12 seasons, can keep his head coaching job for this season and beyond it will be a testament to his ability to get overpaid prima donnas to play together. The Jayhawk nation wishes you success. Rock Chalk.