3 keys for KU football at No. 17 Coastal Carolina

After a narrow, 17-13 win over FCS opponent South Dakota in the season opener last week, the Kansas football team is about to take on a Coastal Carolina program that returns nine starters from what proved to be one of the best offenses in all of the FBS in 2020.

“I don’t know that they’re weak anywhere,” KU defensive coordinator Brian Borland said of the No. 17-ranked Chanticleers, who rolled, 52-14, over The Citadel in their 2021 debut.

“So you can’t say, ‘They can’t really do this well, so we’ll really stop the other aspects.’ There’s nothing they don’t really do well,” Borland said. “So it’s a heck of a challenge, for sure.”

Coastal — which won in Lawrence each of the past two seasons — brings back from 2020 not only quarterback Grayson McCall, whom Borland described as “legit,” but also its entire offensive line, running back Reese White, receiver Jaivon Heiligh and tight end Isaiah Likely. Borland said the 6-foot-4, 240-pound Likely “is really a wide receiver playing tight end.” 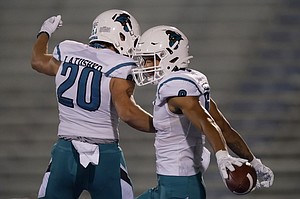 Coastal Carolina wide receiver Greg Latushko (20) celebrates with Jaivon Heiligh (6) after a touchdown during the first half of an NCAA college football game against Kansas in Lawrence, Kan., Saturday, Sept. 12, 2020. (AP Photo/Orlin Wagner)

But what really makes Coastal extraordinary is that its scheme features a spread option offense that can gash a defense that gets caught off guard.

Lee said the hardest thing about defending an option offense like Coastal’s is that the players have to be “extremely disciplined” for four quarters.

While CCU’s scheme, Borland pointed out, isn’t anything like a traditional triple option attack, such as the one Army has implemented, the Chants run a modernized version of the triple option, along with some more standard offensive looks.

“You’ve really got to spend a lot of time on that, because if you don’t you’re not going to be prepared,” Borland said of CCU’s option plays.

KU’s D.C. actually started studying the Coastal offense before he even knew he’d be coaching the Jayhawks this fall. The Chants’ 2021 schedule also includes a trip to play Buffalo on Sept. 18. During the spring with the Bulls, Borland said they prepared for the spread option.

Borland has so much respect for the Chants’ offense that he made sure to carve out some practice time with the Jayhawks during the preseason to familiarize the defense with it far in advance of the typical game week preparation.

“It presents a lot of challenges,” Borland told reporters this week. “If you’ve got any suggestions, fellas, I’ll take them,” he joked.

While KU’s offense did enough to make sure head coach Lance Leipold got a win in his first game with the program, the Jayhawks have plenty to work on heading into their primetime road game against a top-20 team.

Offensive coordinator Andy Kotelnicki liked the way QB Jason Bean (17-for-26 passing, 163 yards, two touchdowns) ran and made things happen when the pocket broke down in his KU debut. But what Kotelnicki appropriated most was Bean’s ability to learn from his mistakes.

Kotelnicki pointed out that both of Bean’s TD throws, as well as a crucial 4th-down completion in the fourth quarter, came on plays that he missed earlier in the game.

“All three of those plays were strikes when we got back to it the second time,” Kotelnicki shared. “In the past I’ve dealt with guys who struggled to make those corrections from Week 1 to Week 2, let alone within the same game. So for him to do that tells me that his upside is still just rising.”

The O.C. expects Bean will continue improving each day, and if the Jayhawks are to compete with the Chanticleers they will need that to be true of for all of its offensive personnel. Kotelnicki said he expects the growth from Week 1 to Week 2 for the offense will be significant, including on the offensive line.

The Jayhawks’ work in progress offense will have to execute against a CCU defense that returns 10 starters from the 2020 team that went 11-1. Six of the Chants’ top defenders have 21 or more career starts, led by linebacker Silas Kelly (34), a super-senior who made 80 tackles, 6.5 tackles for loss, five sacks and an interception last year.

Kotelnicki at least knows what to expect out of the CCU defense.

“We’ve got to do a good job of putting stress on them in certain ways,” he said, adding it’s up to KU’s coaches to set the players up for success against the experienced defense.

Playing in a hostile environment, the Jayhawks also will need to get off to a better start at CCU than they did versus USD, when they didn’t pick up a 1st down until the second quarter. A much improved rushing attack — junior running back Velton Gardner produced only 21 yards on 19 carries — will be crucial, as well, for KU’s upset bid.

One reason the KU defense found success in the opener was the Jayhawks routinely got off the field on 3rd downs. USD only picked up three 3rd down conversions on 13 attempts.

It will be more difficult to stymie the Coastal offense in such situations, but it’s a blueprint for success the Jayhawks will need to follow as best they can.

Typically, Borland said, making 3rd down stops has a lot to do with putting the offense in a tough spot with a tackle for loss on 1st or 2nd downs. But that often wasn’t the case for KU in Week 1, he added.

“The 3rd down stuff, I thought we were able to be disruptive to the quarterback (Carson Camp),” Borland said of what helped KU most. “I don’t think there was ever really any degree of comfortability back there with him, because he knew that we were able to get some pressure on him. Not always sack him, but be around him all the time quickly.”

KU played a lot of man coverage in those situations and executed, the coach added, before he brought up what he liked even more about what the defense did against USD: denying all three of the Coyotes’ 4th down attempts.

“I feel like guys really got a lot of momentum from that and a lot of confidence from those situations. I hope it keeps manifesting itself this week, too,” Borland said.

While Leipold also enjoyed seeing the defense make so many stops in the opener, there are areas that need improvement, too.

“Like everything, as we move forward we want to tackle better than we did,” Leipold said. “I think the two touchdowns (that USD scored in the second half) there were missed tackles.”

41-17 is better than Citadel in week 1, but another regression from last year. At some point, hopefully we'll see progress realized, though it's a bit harder this year when other teams seemed to retain so many more Super-seniors than we did.

Our offense has to show more than improvement, we have to actually get more than 1 yard per carry...closer to 3-4 yards per carry and a break out run or two.

Our offense cannot do the 3 and out game early like it did in Game 1, we need to keep the defense off the field more.

Turnovers on defense would be nice, there were fumbles last week, but no turnovers...let's hope we are plus 2 in that tomorrow.

KU will get pounded by simple option football. Learn from it.

41-17? I doubt that we'll do that well. But, if we do, I'll consider it a decent sign. And, if we can beat the line by a TD or better, I'll say that the new coach and his team are already working miracles.

David, agreed. If we could keep it to 17, I’d consider that to be a significant achievement. Benton is right, we can’t go O-fer on offense early in the game. That’s what starts the snowball rolling.

Coastal might end up being the best team that we play this year. So many returners from a really good team. We will have to play at a very high level to keep the game from becoming a blowout. A good start would make a big difference.

My confidence level is low, but as Matt Tait stated the score is currently 0-0.

Benton's 3 keys for Kansas are certainly on the mark, but Smithology did predict a vastly improved offensive line (the jury is still out).

Brooks Stadium will be packed with 20,000 CC Fans dressed in white. To borrow a Yogi-ism, "nobody goes there anymore, it's too crowded"!

We lost 38-23 last year, I expect the margin to be closer than that. I realize home/away and they have more starters returning...blah blah blah...but we should be able to beat this team year in and year out, but at some point our expectations should be to improve over the previous year.

Goals for the rest of the season:

There are two teenagers playing for the Women’s US OPEN Tennis Championship Saturday.

I would love a win, appreciate a competitive game, and look forward to Coach L's comments should we fall in battle.

As posted earlier - The so called experts who set the lines for Vegas are not usually off by 4 TD, so am not expecting a miracle. But it would be nice to watch a competitive game in which KU could pull a shocker. If you go back to 2019 many "experts predicted Boston College to win big (42 to 12, 45 to 6, 42 to 10, 55 to 6, etc.) yet KU won 48 to 24. I am certain Coastal will not take KU lightly, but it would be fun pull the upset tonight! Rock Chalk.