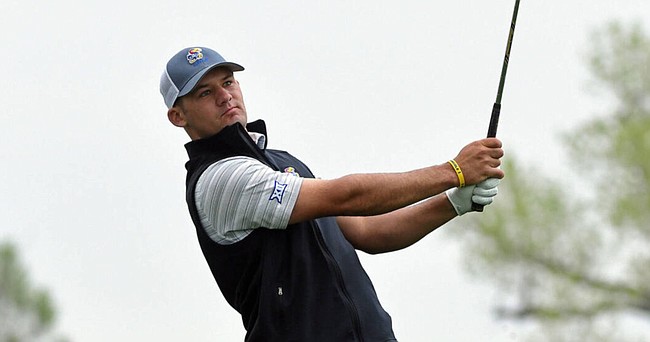 The Kansas men’s golf team is headed to the postseason for the fifth consecutive season.

Earlier this week, head coach Jamie Bermel’s squad found out it had earned a spot in the NCAA Regional in Tallahassee, Fla., which is slated for May 17-19.

The Jayhawks are the No. 9 seed in the 14-team regional, which also includes host school and top seed Florida State.

“Any time you can play in May, in college golf, that’s a good thing,” Bermel said. “Now we have to try to get deeper into May. Hats off to the guys. Tough year. Tough year for the coaches; times we’ve never seen before. But we stayed patient, we stayed true to what we’re about, hard work and being disciplined and it worked out.”

Freshman Luke Kluver was the Jayhawks’ top individual performer this season, finishing with a scoring average of 72.55 strokes per round. He was joined by juniors Harry Hillier (72.86) and Ben Sigel (73.82) as the top performing Jayhawks.

“It’s awesome,” Hillier said of qualifying for regionals. “We didn’t know if we were going to have a season or not, and I think the team and myself are just really grateful to be playing, but now we have a job to do.”

The upcoming Regional tournament will take place at Seminole Legacy Golf Club. Joining the Jayhawks and Seminoles at the event are: second-seeded Georgia, third-seeded Liberty, No. 4 seed LSU and No. 5 Georgia Tech.

Sixth-seeded Georgia Southern, No. 7 TCU and No. 8 Indiana join KU in the top 10, with USC, Ohio State, Davidson, Florida A&M and Long Island University rounding out the field.

In other golf news this week, the Jayhawks landed six golfers on the Academic all-Big 12 first team — Sion Audrain, Jeff Doty, William Duquette, Kluver, Sigel and Zach Sokolosky — and another, Hillier, on the second team.

Congratulations Jayhawks! On the course and in the classroom.