A former standout defensive back for the University of Kansas football program and a 10-year pro in the NFL, Kwamie Lassiter died Sunday at 49, after suffering a heart attack.

Lassiter, who is the father of current KU receiver Kwamie Lassiter II, played for the Jayhawks from 1992-94.

While at KU, Lassiter helped the Jayhawks reach the 1992 Aloha Bowl, where they defeated BYU. The safety led Kansas with four interceptions that season. His team-leading three picks in 1994 helped Lassiter pick up All-Big 8 second team honors.

He went on to sign with the Arizona Cardinals in 1995 as an undrafted rookie.

Playing safety for Arizona, he turned his first NFL opportunity into an eight-year job with the Cardinals. He became a Pro Bowl alternate in 2001 after snagging nine interceptions. 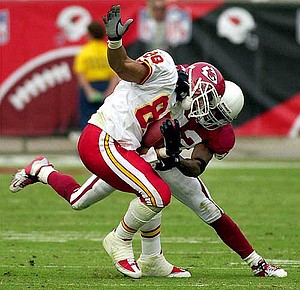 "We were all devastated to learn of Kwamie’s passing today and our hearts go out to all of his family and friends," Cardinals team president Michael Bidwill said in a statement released by the organization. "Kwamie came to the Cardinals as an undrafted rookie free agent. He not only became a key contributor to our team for eight seasons but continued to make an impact on this community after his playing days ended. He will be missed greatly."

A Virginia native, Lassiter left Arizona via free agency in 2003, joining the San Diego Chargers. He finished his NFL career in 2004 with the St. Louis Rams.

Lassiter remained active with the Cardinals organization following his career, taking part in alumni functions and occasionally working as part of the team's radio coverage. Lassiter had been the first player host of the team's "Big Red Rage" radio show.

He also created the Kwamie Lassiter Foundation, built to raise awareness for challenges children face growing up, including health issues like sickle cell, cancer and obesity.

Dead of a heart attack at 49? That is way too soon. Sad news. I'm sorry for Mr. Lassiter's passing, and I'm also sorry for his young namesake. College is tough enough without having to bury your father. My thoughts are with the Lassiter family tonight.

One of the hardest hitting players in KU history. The guy would absolutely bring the pain. Great, great player for KU. Loved watching him play. Very sad day.

Oh no. A great player and ambassador. He will be missed.

Complete heartbreaker. He was one of the nicest people you could ever meet. When Beaty brought his roadshow to Arizona last spring I had the opportunity to chat with Kwamie for about 10 minutes. He was excited for his son's opportunity to suit up at KU. On the commemorative football I got that day, I got his signature and not that of coach Beaty. Way too young to go.

From the Aloha Bowl teams of the 90s there are now three we have lost (at least that I can remember) that all went on to the NFL - Chris Banks, Keith Loneker and now Kwamie. Three really great ambassadors for the University. Very sad day indeed.

Big loss for the Lassiter family and the KU community. Very sad.

I hope for Kwamie II to carry on his dad's great name. Keep the legacy going.