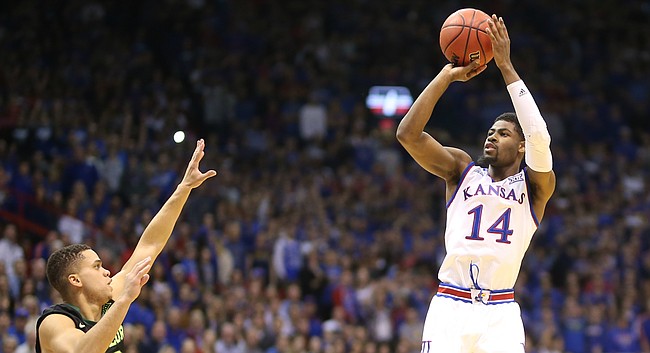 Kansas guard Malik Newman (14) pulls up for a three against Baylor guard Manu Lecomte during the first half, Saturday, Jan. 20, 2018 at Allen Fieldhouse.

Disaster averted. When the Kansas basketball team’s offense went stale in the second half Saturday versus Baylor, it appeared the Jayhawks might lose at Allen Fieldhouse for the third time this season.

Instead, KU survived in dramatic fashion, winning 70-67 against the Bears by finishing the game on a 9-0 run.

KU’s lead hovered around 10 points much of the evening, until the home team’s slow start to the second half allowed Baylor to get within 5 points six minutes after intermission. 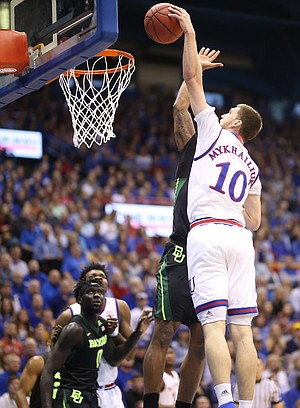 In the meantime, no Jayhawk other than Udoka Azubuike was giving the home team points. Baylor took advantage when KU’s offense struggled, eventually taking its first lead of the game with 5:31 left. The Bears put KU in a five-point hole less than a minute later, on the power of a King McClure 3-pointer and a Jo Lual-Acuil Jr. layup. The margin grew to six.

But Manu Lecomte’s bucket with 2:50 to play was the final score for Baylor, as Malik Newman and Devonte’ Graham put the Bears away in the final minutes.

• The game turned when: Newman brought some versatility and life to the Kansas offense in crunch time.

Azubuike was the only Kansas player with second-half points (11) until there was 10:18 left to play and freshman backup Marcus Garrett made one of two free throws.

Kansas finally got a second-half basket from someone other than its 7-foot center with 5:21 on the clock, when Graham went in for a layup and a goaltending call on the try tied the game at 56.

It was the first Kansas field goal contributed by someone without the last name Azubuike since Graham’s hit a 3-pointer with 7:34 left in the first half.

From there, KU picked up a corner 3-pointer from sophomore Newman, setting off a four-minute stretch during which the 2-guard poured in 12 points.

Graham sealed the win with a pair of free throws with 3 seconds left.

• Offensive highlight: KU converted on every one of its first seven shot attempts against Baylor to sprint out to an 18-5 lead. But none of the field goals were as surprising or electrifying as the one Svi Mykhailiuk violently sent through the rim to finish off a drive. 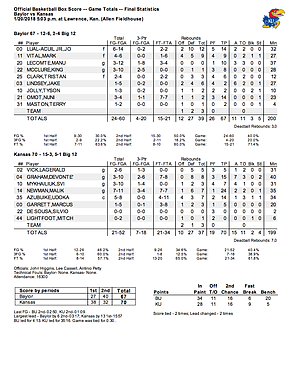 The Jayhawks already had their collective feet on the accelerator, up 14-3, and had drained each of their four 3-pointers when the senior from Ukraine caught a pass out on the right wing, behind the arc. Always a threat to fire away from long-range, a little ball fake from Mykhailiuk got Mark Vital to bite, providing the Jayhawk he was attempting to guard with an angle for a driving lane.

Two hard dribbles and a takeoff later, Mykhailiuk was at the rim with the ball cocked high above his head, in his left hand. The senior guard known most for his long-range shooting accuracy proceeded to throw down a shockingly strong one-handed jam as a recovering Vital tried unsuccessfully to contest the dunk that sent the fieldhouse fans into a frenzy.

Mykhailiuk went on to have mixed results on drives to the paint in the first half, missing three layups and a dunk attempt. But the success on the first one set an aggressive tone less than five minutes into the game.

• Defensive highlight: There weren’t many for the Jayhawks until their massive center from Nigeria came through with some timely defense at the rim in the clutch.

King McClure tried to attack Azubuike with a drive to the paint with a little more than a minute left, and the sophomore center rose up, didn’t make contact and altered the layup enough for Newman to snag a miss and take it the length of the floor for a go-ahead, fast-break layup.

Azubuike’s defense led to one of the biggest shots of the game, and Kansas took a 68-67 lead with 1:09 to play.

The center showed up as a deterrent near the rim again, with less than five seconds left, when Lecomte tried to float a rainbow high over a leaping Azubuike. A potential game-winner for BU rimmed out and Graham secured the defensive rebound.

• Key stat: Second-chance points. Baylor’s offensive rebounding often improves its chances, and it was that aspect of the game that kept the Bears alive Saturday.

BU gathered 12 of its missed shots in defeat and benefited to the tune of 16 second-chance points.

The Jayhawks, meanwhile, had a big, fat zero in that category until 10:18 to play. At that point, following an Azubuike offensive rebound, Garrett made 1 of 2 free throws, giving the home team a single second-chance point.

The Jayhawks finished with 1 point off 10 offensive rebounds.

• Up next: The Jayhawks head to Norman, Okla., for a road test against freshman sensation Trae Young and the Sooners (6 p.m., ESPN). OU dropped to 14-4 overall and 4-3 in the Big 12 with an overtime loss at Oklahoma State on Saturday. 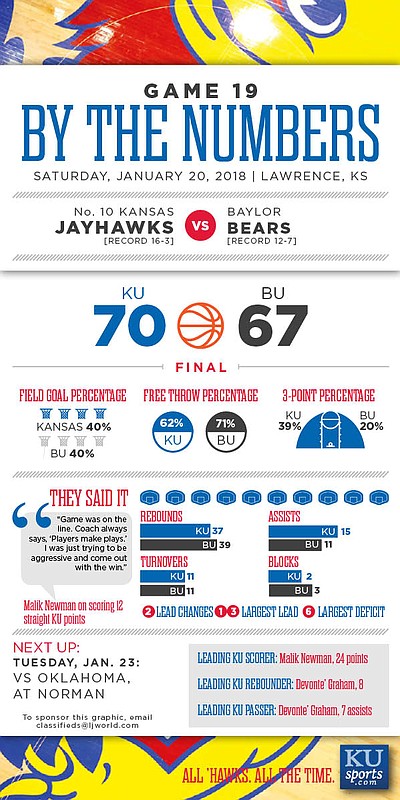 Malik Newman was the last player I expected to save our sorry asses from a disgraceful fall-from-ahead loss at home, and yet he did. So props to him for stepping up in crunch time.

And at the end of the day, we are 6-1 in the Big 12. But Jiminy Christmas, can we show a little more pride in defending Allen Fieldhouse?

It would be nice if the analysts would ask someone the correct pronunciation of the players names before they do a game.

He seems to think he knows best how to pronounce Mychailuk. Maybe he should ask Svi.

Pronunciations are always in the Game Notes. Commentators just have to read them and practice a few times.

The Malik of the last couple of weeks has been stepping up. Keep it up!

Today was an absolute TRAP GAME. A team KU has beaten 17 straight times in Allen Field House sandwiched between road games at West Virginia and Oklahoma, two of our biggest contenders for the title.

One strategy our opponents may consider is foul Marcus and Dok every time they touch the ball and make them go to the free throw line! What a painful sight to see either of them at the line. They were showing faces in the crowd right before their free throws and the people looked like they were cringing in front of a firing squad.

Solid post Tony. Marcus and Dok should never be on the court at the same time late in a close game.

No crap. Whoever taught Udoka how to shoot free throws needs to be fired. This is when Danny Manning Big Man School would be useful. If you had said we might be 8-1 halfway through the conference season I would have said you're crazy. But if we beat OU and Okie St. 14 in a row is all but assured.

Why on earth doesn't Dok try underhanded free throws? It was good enough for Wilt.

Dok does not shoot free throws he simply throws the ball toward the goal. He needs to get his shooting hand behind the ball instead of simply throwing the ball with both hands.

He has horrible form but his problem is not that he's two-handing it, or that his hand isn't behind the ball. His hand is behind the ball, sideways, and the ball comes off the pinky side of his hand. It's also very low and off to the side a bit.

Wilt shot 28 of 32 three throws in the game where he scored 100. Overall though, his best year at the line was 62%. He also had Rick Barry to help him.

I respectfully disagree: Whoever taught Udoka how to shoot free throws needs to be taken to the wood shed and FLOGGED !!

We will still have to play each team in the Big12 twice. Lots of room in February to stumble. These Jayhawks will have to be focused both halves of each game to get through the gauntlet that is the Big12.

i was wondering tonight if he knows how to shoot anything other than a turnaround hook. his free throws look like he's trying to put hook spin on them instead of straight ahead. he actually might make more if he stood backwards and turn hooked.

I don't know and don't want to know how he almost wedged one between the rim and backboard. What the heck? Lol.

You gotta love the guy. He wears his heart on his face after everyone.

Danny M isn't doing so well at WF. He may be back. Just sayin'.

@DiscGolfer Jason, If I’m not mistaken Danny M just signed a huge extension with WF some months ago, AD loves the talent Danny M is bringing in.

In November. His job is apparently safe for the near future. Still though, with only one winning season (2016-17), he is going to need to keep the program headed in the right direction.

I would love to see him come back to Kansas but I would also like to see him be successful at Wake Forest.

Fran was gushing about our roster for next year and saying it is our best talent in 5 or 6 years. Duke signs the top three rated recruits for next season. How does that happen? Danny needs all he can get.

Danny M will be fine for next season, he has a 5 star player and 3 4 star players on the way, you gotta remember Danny M lost that Collins kid to the NBA last offseason also.

Here's to KUMB coaching staff and players for getting it together...!!! Way to grind it out all the way. But please, please teach Garrett how to dunk!! The guy can defend anybody, but his offense needs hyuge improvement. The guy is so soft on offense. That's a big problem when he thinks he is only asked to pass the ball around.

Patience. Garrett is doing all the little things Self insists on. That's why he's (usually) first off the bench.

Self's Rule #1: don't let the ball "stick." Marcus doesn't. He has good ball movement. We are getting a LOT of our shots blocked this year because our guards are driving against BIG MEN. Marcus will benefit from true forwards next year. His shot will come. I'm happy with his play for now.

Danny Manning big man school started when he was born. His father Ed Manning, was an ABA/NBA/College player/coach who taught his son to play at a very young age. Udoka didn’t start seriously playing basketball until ninth grade. Danny played like a guard in a center’s body. Udoka will never be mistaken for a guard.

they can't all be pretty, but I wish they were. it is great to see Newman becoming the stud we heard about. On to Norman.

It is quite similar to Lonzo's form, only I think the release is even lower. It's ugly that's for sure.

Wonder if a Jayhawk has ever banked two free throws in one game, or banked in half of his makes in a game?

Way to go Malik! It wasn't pretty but no one will care if we win our 14th.

Rock fight! Why is Sam riding pine? Betcha HCBS didnt take too kindly to Keegans love for Sam. He must really blow on D in practice for his offense to be outweighed by Marcus on defense. Sams body language on bench is terrible. Betcha he is outta here.