In three consecutive losses for the Kansas football team, a troublesome trend emerged.

First came an 18-point deficit against Central Michigan, then another on the road at Ohio. In Saturday’s Big 12-opening defeat at the hands of West Virginia, the Jayhawks fared even worse, falling behind by 25.

All three of those substantial holes came before halftime, too.

The Mountaineers (3-1 overall, 1-0 Big 12) all but buried KU early with four touchdown drives of 80-plus yards just more than a quarter-and-a-half into the game.

Meanwhile, the Kansas offense, after opening conference play with a 14-play drive for 64 yards and a 28-yard Gabriel Rui field goal, followed its brief 3-0 lead with four straight punts and a pair of three-and-outs.

The Jayhawks (1-3, 0-1), for better or worse, seem resolute in downplaying their tendency to lag behind opponents. 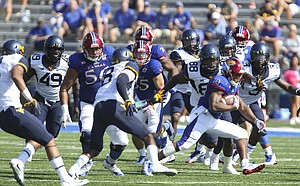 “I don’t think there’s a problem,” sophomore running back Khalil Herbert said following a 56-34 loss to WVU. “We’ve just got to execute our assignments and plays that are called to fix that.”

West Virginia averaged 10.3 yards per snap on offense during a four-drive span of the first and second quarters, paving the way for a 28-3 lead.

Perpetually upbeat third-year Kansas coach David Beaty liked the way KU responded. A 67-yard Herbert rushing TD rendered the 25-point, second-quarter disadvantage temporary. And KU’s 41-yard Rui field goal as the first half came to a close was the first of three consecutive scores for the underdog Jayhawks, who out-scored West Virginia 14-0 in the third quarter.

“Well, you would think normally that's a pretty tough hole,” Beaty said, “but we kind of dug out of it.”

A pick-six on an off-target, deflected Peyton Bender pass for Steven Sims Jr. in the final minute of the second quarter prevented Kansas from testing WVU further, as Mike Daniels turned an interception into 35-10 advantage.

Beaty, though, loved how KU followed one deflating play with a 25-yard Herbert rush, and Bender completions to Herbert and Jeremiah Booker, setting up a Rui field goal before halftime.

“We didn't just sit there and go in at halftime. Instead of that being a seven-point turnaround, that was a four-point turnaround, and that's something to build on,” Beaty asserted. “You know, same thing with us all over the field. We've got to keep fighting. We've got to keep fighting and keep improving. That's the thing is continuing to improve. As much as I know it may be difficult for just the average fan to see, I see the improvement. I see some improvement going on out there in all three phases. We've got to make a lot of progress quicker because this is a tough conference, but that's a good football team (WVU). That's a good football team out there, and they can put points on the board pretty quickly, which they did in the fourth quarter. I thought the second half was a tale of two quarters.”

Beaty stated his disappointment in the fourth-quarter play, when the visitors out-scored Kansas 21-7. Considering KU cut the WVU lead to 35-27 late in the third, WVU coach Dana Holgorsen said he was glad the Mountaineers got out of Memorial Stadium with a win.

“We looked good at times and bad at times,” Holgorsen said. “I think that anybody that was here and watched the game can probably figure that out. There were good things and bad things. We were either rolling on offense or we were not. I don't what it was. The second quarter was good, (and the) fourth quarter was good. I'd rather be second and fourth than first and third.”

Kansas has a week off, without a game, to try and remedy its slow starts before playing host to Texas Tech on Oct. 7. Beaty said embracing the run game and eating up the clock could be beneficial for the Jayhawks going forward, after Herbert’s massive,291-yard rushing outing.

“I think that's really kind of the story of the first quarter,” Beaty said of a run-dominated opening drive that took more than six minutes off the game clock, “which was something we were hoping we could get done, which was chew up the first quarter with some drives running the football and trying to stick to it a little bit. Yeah, I mean, you'd like to be able to utilize that at times. Unfortunately we got behind again, and when you get behind, you've got to start throwing it a little bit. You've got to be a balanced football team, period, anyway, but I'll tell you this: We're improving, and we're going to continue to fight. We're getting better in a lot of areas. We're just not there yet, and I hate it for our fans, I hate it for our stakeholders, because they deserve better than that. But there's a lot of improvement in areas, just not enough yet, not enough to win that game today, and that's unfortunate, because I thought that was a really, really evenly matched game to be honest with you as we got into it. I felt like it should have been a lot closer than it turned out to be. That's disappointing.”

This is a reaction to the headline without having read the article itself (I'll read afterward). In one important respect the KU loss was dissimilar to the two losses before it: It was against West Virginia. NOT a lower-caliber football team.

At a few moments on Saturday, it looked like Kansas actually belonged on the same field.

Absolutely! Yes, there were some painful moments as well, but the guys did not cave. Imagine if we don't throw a pick 6 with 44 seconds to go in the half. I know...coulda, woulda, shoulda, but that is a very preventable mistake.

Individual mistakes on offense coupled with a total lack of a functional secondary means we'll never win a game without fixing that. We need to start rushing 5 or 6 guys, blitz on any passing down, because our guys aren't able to cover the way they should. Or maybe it's not individual capabilities, just the entire scheme...bad scheme overcomes good player abilities.

Please coach, what's happening on defense isn't working. It's just not, and it's not going to get better, you need to change something. Your offense is scoring over 30 points a game and is 1-3. That should tell you something.

For anyone feeling down about another loss, look to Durham, North Carolina as a illustration of hope. I know KU football has been bad, but its hard to think of a worse stretch for a college football program than Duke University for about ten years starting in the late 90s. No bowl appearances, multiple seasons with zero wins, and little room for hope from a school predominately focused on basketball.

Enter David Cutcliffe in 2008, whos first 4 seasons averaged about 4 wins, but then in his fifth season got to 6 wins and a bowl appearance. In the 4 seasons since then, Duke has made 3 bowl games and in 2013 achieved 10 wins to go along with an appearance in the ACC Championship Game. Saturday, they knocked off rival UNC to go to 4-0, and look like the best team of the Cutcliffe era so far.

I'm still not sure where I stand in regards to the current KU coaches. No doubt, Beaty was given a horrible situation and I don't think anybody could reasonably expect results like 6+ wins in the third year. That said, I think some fans are more frustrated by what they see is a lack of progress in the right direction. In Cutcliffe's case, the results were certainly not great the first 4 years but the progress was undeniable. I think whether or not KU is showing true progress is debatable at this point among most people.

Regardless of how KU football moves forward, there is still certainly hope. Its all about finding the right people for the right program.

I think Beaty has done a good job of finding the right assistants to make the requisite progress as time has gone by. I think he's done a good job of holding his assistants accountable considering the amount of money they are making and the level of performance that is expected of a power 5 program. He made significant adjustments for 2 out of the 3 phases of the game (new special teams coordinator, new offensive coordinator). I think he needs to take the next step and upgrade the defensive coordinator.

Things are not going to get better on D because there's no such thing as player development.

I have to say, I was impressed with the fight these guys had on Saturday. Things looked grim by halftime, but instead of leaving me and my Dad stayed. We walked away impressed and glad we stayed to watch, even if we still lost by 22. A few things to note, though:

1.) Our defense had some good stops, but they still couldn't hold them enough to keep us in the game towards the end. I did notice our run defense has gotten better, but our pass defense is simply atrocious with no signs of improving anytime soon.

2.) Herbert is a beast. The guy is shifty and he can break tackles. He's going to be fun to watch the rest of the year that's for sure.

3.) Bender had a few good throws, but he had a lot of bad ones. You can attribute some of that to the line, but for the most part he looks scared out there. I also find it hard to believe he's the best QB on the roster. If our run game is going to be so strong, I'm thinking Stanley might be the best option for us. I could be wrong, but I'd rather be proved wrong then to sit here and watch another 20 missed targets.

4.) I really liked the play calling this game. We're starting to look like a real offense. I'd say we need some improvement at pass protection and QB, but overall I'd give them a B- grade, which is a heck of a lot better then it has been.

5.) Did anyone see the CB on WVU that got hurt after the long pass to Sims? I feel bad he was injured, but it took darn near 20 minutes to get him off the field. He laid there for a while, and then when they finally got him up, they walked him across the field. This guy could barely stand. Is there not a cart for these situations? It was frustrating to watch because a.) it took forever and b.) I felt bad for the guy.

A lot of good points, John.

I think we've all heard things about Stanley being not 100%, and I wonder if he would be playing a lot more if he were healthy. At this point, I think Stanley deserves to show if the last few games of last year were a fluke or if he can really lead this team. I just don't trust Bender to be consistent enough to help them make the progress they need to make.

My friend and I were at the game, and we were talking about how long it took to take that guy off the field (and it actually happened twice with the same guy). My friend also pointed out that he didn't see a cart anywhere, at which point I noticed that too. That's very strange, and concerning. Can anyone shed more light on that?